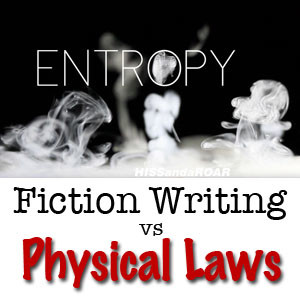 Gwen C. Katz has a BA in chemistry, and has contributed other articles about chemical fallacies and explosions in fiction. She did conservation research in a museum, helping museums develop better ways to preserve art and prevent fading and damage, before quitting to become a full-time writer. She has an opinionated blog and you can also yell at her on Twitter.

It turns out magic violates the laws of nature.

I know: Big shocker, right? The things that happen in fantasy novels couldn’t actually happen in real life. And we want it that way. Since the whole point of fantasy is that it’s not like the real world, forcing it to adhere to physical laws would only ruin the fun.

Still, we can learn something from looking at the physical laws of the universe and how they work in the real world compared to fictional worlds. Which laws are usually respected and which ones are frequently broken? Do the laws of physics have any possible applications to magic? Are there ways to include the kind of big, spectacular magic we all enjoy while obeying the laws of physics? Let’s have a look.

This law states that, as an animal gets bigger, its weight increases faster than its strength. This is the reason animals can only grow to a certain size, and why large animals tend to be very thick and stocky, because they require a much larger muscle mass and stronger skeleton in proportion to their weight than smaller animals.

Applied to fiction, this is why the 100-foot-tall men of B-movie fame couldn’t really exist: A person 20 times the size of a normal human being but proportioned the same would be unable to support their own weight. That’s also why really enormous, Kaiju-sized animals are impossible. The largest known land animal that ever existed, Argentinosaurus, was only about one-third of the size of a Kaiju; much beyond that, an animal simply wouldn’t have room for enough muscle and bone, nor would it be able to consume enough food to give it the energy to move all that mass. (Oceanic animals can grow larger because the water supports their mass.) 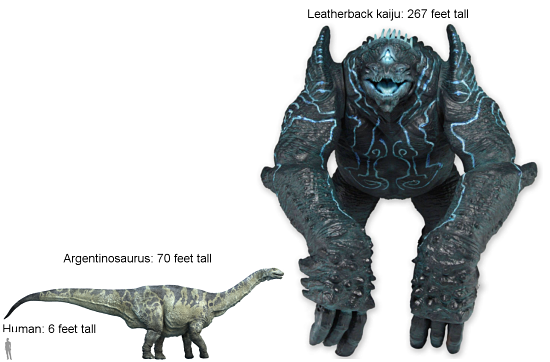 But fear not, intrepid size changer: also thanks to the square-cube law, things get really fun at the other end of the scale. Smaller creatures are stronger in proportion to their weight, which is why ants can carry a hundred times their body weight. Thanks to their small mass, they’re also very resilient against falling. The muscles of ant-sized humans would render them similarly strong.

Bones are still a problem, however: The hair-thin bones of a person that small would break at the slightest exertion (sorry, Ant-Man). That’s why insects have exoskeletons. Exoskeletons are extremely strong, since they’re based on the sturdy cylinder shape, but they’re also extremely bulky: A human-sized creature would require an exoskeleton so thick that there would be no room for internal organs. Thus, the giant insect aliens of Starship Troopers and a million video games are impossible. Thankfully for us, insects must remain small.

Other Matters of Scale

Aside from the physical limitations of their actual movement, extremely large objects also look like they’re moving more slowly because they’re covering more distance. For instance, all objects fall at the same speed (except for wind resistance), but a toppling tree takes a much longer time to hit the ground than a dropped pencil.

Common sense, sure, but when we create creatures and machines vastly bigger than anything that really exists, we tend to forget how much slower they should appear to move. For instance, when this monster lunges at the Millennium Falcon, it moves around 1500 feet in two seconds, approaching the speed of sound.

On the other end of the scale, if you shrink someone down, there’s another interesting question: What, exactly, is going on at a cellular level? Is Ant-Man made up of fewer cells, or are the cells themselves smaller? There’s a limit to how small a person could shrink by reducing the number of cells in their body, because it simply takes a certain minimum number of cells to build the complex systems of the human body. But similarly, there’s a limit to how small the cells themselves could shrink, because they need room to contain bulky DNA molecules.

Conservation of matter states that matter can never be created or destroyed. It can undergo physical changes and chemical reactions that might make it look different, act different, and take up more or less space, but at the end of the day, if you put it on a scale, you have the same amount of stuff.

This is one of the most intuitive physical laws and, as a result, one of the most commonly followed in fiction. Many shapeshifters, like Mystique and the T-1000, must conserve their mass and not grow bigger or smaller, and some magic systems, like that of Fullmetal Alchemist, obey the same rule. Still, it’s broken every time a Harry Potter wizard uses a refilling charm on their drink or when Minerva McGonagall turns into a cat.

Outside of fantasy, the conservation of matter is broken whenever heroes destroy something by blowing it up. When the Avengers save the world in Age of Ultron by blowing up the capital of Sokovia, all that landmass still exists, and it will still hit the ground with the same amount of force, causing the same amount of destruction—it’s simply in more pieces.

This is also why diverting a killer asteroid headed for earth is a much better idea than blowing it up.

Just like matter, energy is also conserved (except for the mass-energy equivalence). But unlike conservation of matter, conservation of energy is rarely respected in fiction. Maybe it’s because there are so many different kinds of energy: Kinetic energy, potential energy, chemical energy, thermal energy, nuclear energy, and so on, often rapidly converting from one type to another. Or maybe it’s because, in everyday life, energy doesn’t seem like it’s conserved. If you roll a ball along a flat floor, it will eventually stop moving, just as if it were running out of energy (in reality, friction is converting its kinetic energy into heat).

Even worlds that ostensibly respect the conservation of energy usually break it at some point or another. For instance, conservation of energy is one of the basic principles of the magic system in the Kingkiller Chronicles, but Kvothe nevertheless breaks it when he magically uses a small magnet to move an enormous piece of iron.

There are occasional examples of powers that respect conservation of energy. One Smallville villain sucked the heat out of other people in order to warm himself up, leaving the net energy the same (as long as you don’t wonder too much about how he kept getting cold again). But cases like that have limited applications. There is simply no way to include the sort of big, splashy magic that’s the most fun without violating conservation of energy.

Or is there? The eponymous character of Noelle Stevenson’s Nimona is a powerful shapeshifter who regularly violates conservation of matter and energy, as other characters in the comic point out. But her abilities have an explanation: There’s a vast but undetectable type of energy permeating the universe that she accesses when she transforms. Not only does this neatly explain her almost limitless powers, but it’s surprisingly scientifically rigorous. It’s reminiscent of dark energy, which comprises the majority of the universe but is undetectable and poorly understood.

The cardinal rule (the second law of thermodynamics) is that entropy constantly increases or stays the same, never decreases. The world is constantly getting hotter and messier. It’s a bleak law when you think about it. That’s why you can easily break a glass, increasing its entropy, but you can’t then un-break the glass, which would decrease its entropy. The easiest way to think about it is this: If something looks normal when it happens, but wouldn’t look right if you played a video of it in reverse, it’s because entropy is increasing.

Now let’s go back to that Smallville villain. When he uses his power, he gets really warm and the other person gets really cold. This obeys the conservation of energy, but it violates the second law of thermodynamics because heat is behaving the reverse of how it behaves in real life: Instead of spreading out evenly between two objects/people, the heat is all leaving one person and going into the other person, which is a lower-entropy state.

For another example, while Fullmetal Alchemist tends to respect conservation of matter, it often breaks this law. In the pilot, Edward creates a sword out of sand. Sand is very random and high-entropy, whereas a sword is very organized and low-entropy, so that again breaks the second law of thermodynamics. A lot of transmutation-type magic violates this law, even if conservation of matter and energy are accounted for. And cold-based superpowers violate both conservation of energy and the second law of thermodynamics.

Whew. Glad we’re done with that. But I think entropy might have interesting applications for magic systems. For instance, magic might be really good at destroying things (which increases entropy), but really bad at creating things out of raw materials (which decreases entropy). It’s a neat possible way to limit the power of magic.

There you have it, a variety of ways in which science rains on our parade by making it impossible to have enormous monsters, shrink to atom size, have elemental powers, or do many of the other things that fantasy authors happily write about all the time.

Of course we wouldn’t want to stop writing about those things just for the sake of scientific accuracy. But if you’re looking for a more realistic twist on a magic system, it’s worth thinking about how these laws would affect your fantasy world: What limitations they might create or what new possibilities they might introduce.