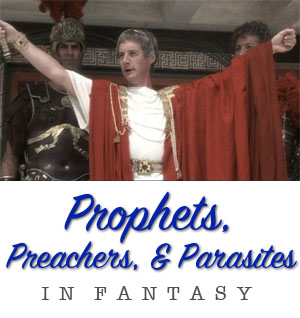 This article on prophets, preachers, and parasites is part of the Science in Sci-fi, Fact in Fantasy blog series. Each week, we tackle one of the cultural, historical, or world-building aspects of fantasy with input from an expert. Please join the mailing list to be notified every time new content is posted.

Jay is presently preparing to self-publish the first book in his epic fantasy series, The Sphere Saga, and working on revisions to the second and third books in that series. He has begun querying agents for his recently completed middle grade urban fantasy Blood is Thicker than Magic. You should check out his website, or catch him on Facebook, or Twitter.

Prophets, Preachers, and Parasites in Fantasy

“Always look on the bright side of life . . . .” Hearing that phrase followed by the whistling conjures for me poor Brian during the crucifixion scene from Monty Python’s Life of Brian. Brian’s wordless look of bewilderment and impotent anger sums up his entire story. The poor guy gets dragged around the entire movie and unwittingly becomes the prophet and savior figure instead of Jesus of Nazareth. Blasphemous to many I’m sure, but the absurdity of Life of Brian is a strong lesson not only about the unbridled power of religion and faith, but more specifically, from a writer’s perspective, the importance of character and choices you make for that character’s actions.

Fiction, especially sci-fi and fantasy, is filled with various belief systems and the priests, penitents, and petitioners following said religions form strong foundations for good world-building and typically can drive the story. Imagine Star Wars without The Force and the Jedi, Dune without the Bene Gesserit, The Wheel of Time without the Children of the Light, or the Aes Sedai. All of those religious institutions are important, but what is truly vital in driving each of those, and all stories with said elements, are the character actions and reactions to them.

The Power of History

In the real world, the same holds true and examining factual events and the people that created or impacted such events can be instructive. There’s no doubt The Reformation and growth of the Protestant movement was historically significant. However, let’s not lose sight that the characters involved shaped and drove even that story. Would The Reformation have happened without Martin Luther? Probably. But, did Luther’s actions and reactions impact the final outcome? Most definitely.

The Church, now known as the Catholic Church, was the center of life during the Middle Ages. Control over the religious and political aspects of society were vested in the Church. However, crises such as the Babylonian Captivity (1309-1377) and the Great Schism (1378-1417) had strained the loyalty of the faithful and devastated the unity of the Church for over a century. A number of problems, such as the search for new sources of income and other forms of corruption, plagued the Renaissance papacy. All of these factors came into play as root causes of the Protestant Reformation.

The immediate cause of the Protestant Reformation was Martin Luther. His theology, which went against the very foundations of the Church, and his ideas on institutional changes needed within the Church had a great impact on the religious and political sectors of society. In no way did Martin Luther purposefully try to bring about the Reformation or try to break away from the Church. He wanted to change the Church from within, doing away with the corruption that was taking place and stopping the teaching of false doctrine returning to the true doctrine of the New Testament. Luther was the most important figure in starting the Reformation. However, there could have and most likely would have been a Reformation without him.

The ideology developed by Martin Luther came from his own personal quest for assurance of salvation and his questioning of his righteousness in the eyes of God. The two basic doctrines developed by Luther were justification by faith and the priesthood of all believers. Luther’s first doctrine was based on Saint Paul’s Epistle to the Romans (1:17). He concluded that one could be saved by the grace of God alone through faith in Christ. 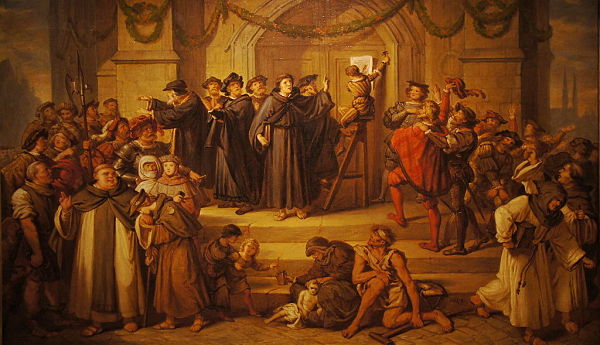 Justification by faith taught that good works and indulgences had nothing to do with one’s salvation. This new ideology totally destroyed the basis of the Church’s system of grace given by the Church and questioned the foundation of Christian belief at the time.

Luther’s second doctrine was the idea that everyone is a part of a priesthood of believers. In his address to the Christian Nobility of the German Nation (1520) Luther states: “It follows then, that between layman and priests, princes and bishops, or as they call it, between spiritual and temporal persons, the only real differences are one of offices and function and not of estate…”

This doctrine basically said that priests and Church officials, including the Pope, had no special powers and weren’t totally infallible.

Luther’s teachings and action had various social and political implications as well. Socially, he advocated the allowance of clergy to marry, which was against the Church’s teachings. Politically, Luther realized his need for support from the German nobles and upper class. He clearly sympathized with the Peasants’ Revolt (1520), but he had to support the nobles due to his need for protection.

Luther felt strongly about stopping the corruption in the Church, especially the sale of indulgences. Luther spoke out about his beliefs that the Church should abandon false doctrine and realize that scripture, not Church officials should be the source of authority for Christians. Specifically, he challenged the Church over the indulgences issue with his Ninety-Five Theses. Luther’s Ninety-Five Theses were presented as a theological debate, but the Church’s response and public uproar resulted in the beginnings of the Protestant Reformation. What transformed Luther from a quiet educator seeking reform into a towering figure of world history was the dramatic image of Martin Luther nailing his Ninety-Five Theses on the doors of a church has power and remains memorable.

Martin Luther was the immediate cause of the Protestant Reformation in that he filled the leadership role required for it to take place. However, the Reformation could have happened without Luther. A number of other theologians and humanists, such as Zwingli and Calvin, were contemporary forces for religious change as well. Luther’s ideology and actions, which gave the Reformation its personality, came along at a time when conditions were prime for a change in the Church and all religious aspects of society. If Luther had not been around someone else with a different theology would have come along, instituting changes and modern religion would probably look much different today.

In fiction writing and developing fictional religious systems, good writers avoid allowing their characters to be merely swept along like Monty Python’s Brian with good reason. Our protagonists, antagonists, and every character in between shape our stories with their actions, or inactions especially in terms of religion. The truly memorable characters are the ones who struggle and affect changes to their own lives, the world around them, and even the gods.

Locke Lamora was trained as a con artist by Father Chains pretending to be a blind priest in The Lies of Locke Lamora. Rand al’Thor, as The Wheel of Time’s fights against multiple prophecies and expectations from various factions to define himself as the true Dragon Reborn. We love and read all these stories because of the struggles these characters face whether they fail or succeed. Likewise, you can write the most intricate, complex, and original religious system, but nobody will care or read about it if your characters don’t have great reactions and interactions within those systems.