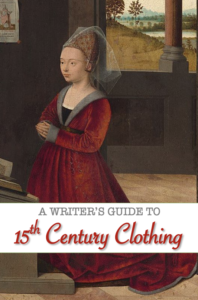 This article on 15th century clothing is part of the Science in Sci-fi, Fact in Fantasy blog series. Each week, we tackle one of the cultural, historical, or world-building aspects of fantasy with input from an expert. Please join the mailing list to be notified every time new content is posted.

Rebecca Shedd has been a historical re-enactor for 20 years, portraying periods from the Middle Ages, Renaissance, American Revolutionary War, American Civil War, the Victorian era, and the Irish War of Independence. Most of the clothing she wears for her reenactments she sews herself. She has a blog on her website, www.rebeccashedd.com, where she provides writers with accurate information based on her hands-on experience and research. She is currently working on her debut novel.

The culture of the Middle Ages has had a large impact on fantasy since the genre has drawn heavily from it for inspiration. This includes the clothing. Many medieval fashion elements will be familiar to readers and viewers of fantasy and fairy tale adaptations. Unfortunately, this has led to the perpetuation of a lot of myths.

Of course, as a fantasy author, you have the freedom to pick and choose from history. However, being aware of the myths can help make your fiction more realistic.

Much of the time, medieval clothing is depicted as baggy, drab, and dirty. There is commonly a mishmash of styles from throughout the medieval period, with pieces of clothing from various periods and places being cobbled together for the “medieval look.”

Welcome to the 15th Century

Historians define the Middle Ages as the period between the fall of the western Roman Empire in 476 AD and the beginning of the Renaissance in the late 15th century. As you can tell, this is a massive amount of time, over 500 years. Fashion changed throughout this period and varied across Europe. I am focusing on the 15th century since the clothing has many popular elements, and it’s a period I know a lot about.

The 15th century was when the idea of “fashion” formed. For the first time in history, your clothing could be “out of date.” Europe prospered during this century, leading to more complex clothing styles, access to more fabrics, and more people having money to spend on clothing and follow the fashion trends. Regional styles also became more pronounced. By the end of the century, it was possible to look at a person’s clothing and know whether they were from England or Italy or Germany.

England and France spent most of the century fighting each other in the Hundred Year’s War, so Phillip the Good, who ruled the Duchy of Burgundy, became the fashion setter. He imported fabric from across Europe. England was producing a dizzying variety of wool of various qualities that could be dyed a rainbow of rich colors, including reds, golds, blues, and greens. The Mediterranean silk-weavers were producing richly detailed designs and opulent silk velvets. 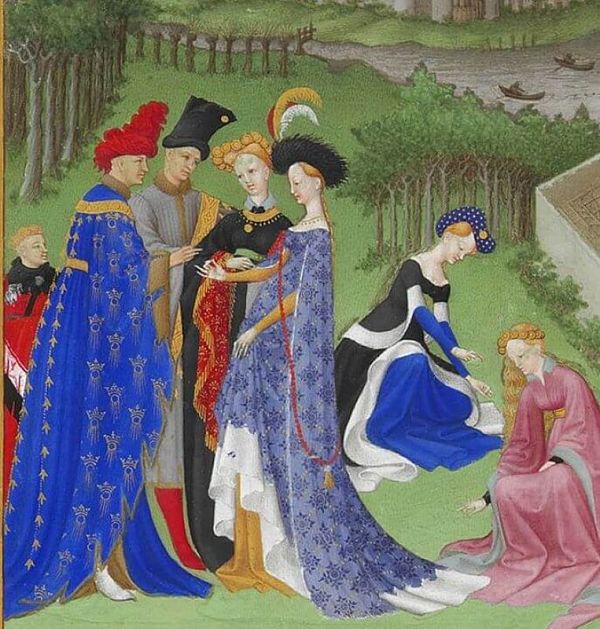 The houppelande was a popular style that had variations for both men and women. It was a voluminous outer garment, usually floor-length, with large hanging sleeves. The edges were often jagged or cut in a decorative pattern. Appearing in the 1360s, it stayed popular for over a century. 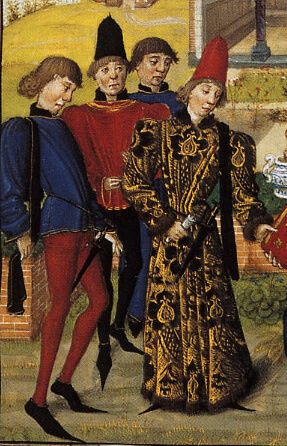 A French prince with his attendants. Note the difference in fabrics and length. Illustration from L’Instruction d’un jeune prince by Guillebert de Lannoy, 1468-70. Image courtesy of Wikipedia.

Men wore a linen shirt as the base layer. They were commonly full through the body and sleeves and could be decorated with embroidery or trim. On the lower body, they wore braies, a linen undergarment held up with a belt. The legs were covered with snug-fitted leggings called chausses or hose that tied to the belt of the braises. Originally, the legs were not connected in the middle, and it was fashionable for them to be different colors. By the end of the century, it became common for the hose to be sewn together at the crotch.

Over the shirt was worn a fitted coat-like garment that buttoned up the front known as a cotehardie. It usually had long sleeves that ranged from fitted to full and “skirting” that extended over the knees. Over time, it evolved into the doublet, which originated in Italy. The skirting shortened until it disappeared altogether. The hose could be alternately laced into the cotehardie or doublet.

Various hats were popular based on location and social status. There were multiple styles ranging from tall to low crowned and wide brimmed to brimless. One of the most popular was the chaperon which remained stylish from the 12th century. It started as a hood with a shoulder mantle. When it was warm, it was popular to roll the hood back and put it on your head, flopping the mantle over artistically.

A group of 15th re-enactors wearing cotehardies also showing the difference in fabric based on station.

Women’s Clothing in the 15th Century 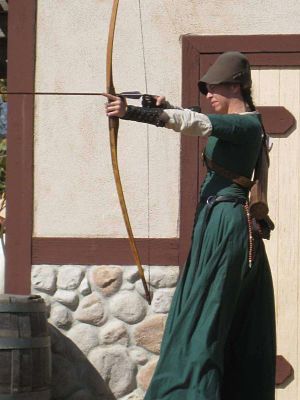 A picture of myself wearing a kirtle I have made.

A linen chemise was worn by all social classes. It commonly had long fitted sleeves and reached to the mid-calf. Over the top, women wore the kirtle, a snug-fitted ankle-length garment. The sleeves could be short or long and detachable lower sleeves were worn. This style was also sometimes called a cotehardie. The Burgundian gown was a popular style of overdress with a V-shaped neckline that displayed the kirtle worn beneath, long sleeves, and a full skirt. Another style was the sideless surcoat, a loose sleeveless overdress with large openings at the side to display the kirtle.

Italy developed its own styles such as the sleeveless overdress known as the cioppa, a lightweight underdress called a cotta and a sideless overdress known as a giornea. The Spanish developed the verdugada, a gown with a bell-shaped hoop skirt stiffened by reed. This was the beginning of the Spanish farthingale, which would have a big impact on fashion going into the Renaissance. 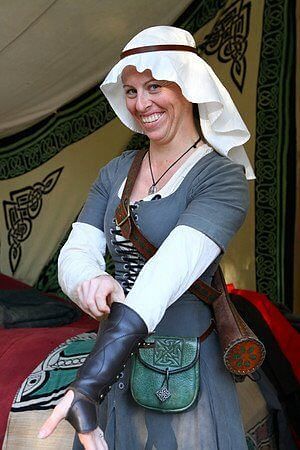 A picture of myself wearing a veil.

Married women were expected to cover most of their hair. Veils were commonly worn, ranging from plain linen to expensive silk. The veil was pinned to bands that were secured around the head. Women’s hats during this period were crazy. They include the fairy-tale famous hennin, a cone that extended from the back of the head often ending in or was covered by a veil.

There were several versions of the hennin, some with two shorter horns. Other styles used various padded or wired shapes covered by veils. In warmer countries, such as Italy, it was acceptable for even married women to wear their hair only covered by a sheer veil or cap.

Footwear was low slippers or ankle boots. To protect their shoes from dirt and mud, middle- and upper-class ladies would wear pattens, which are like wooden platform sandals.