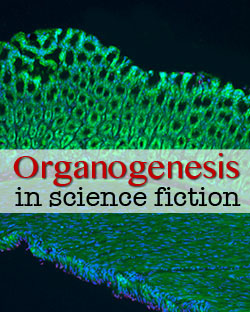 Since getting her Ph.D. in Toxicology in 2015, Megan Cartwright Chaudhuri has worked as a freelance medical writer and editor. Her science non-fiction has appeared in Slate and Visionlearning, while her science fiction has appeared in Analog, Crossed Genres, and the forthcoming Futuristica Volume 1. Megan lives near Seattle with one husband and two cats.

Vat-grown flesh—whether to eat as meat or transplant as organs—has always been one of my favorite sci-fi tropes. What’s not to love about eating a delicious steak without the slaughterhouse, and replacing your cholesterol-clogged heart after you’ve eaten too many steaks?

But when I became a scientist and started growing cells in Petri dishes, I became skeptical about how easily so many characters picked up new hearts, hands, and nervous systems. It wasn’t just the ease that bothered me, but the missed chances to tell an even better story full of the awesome, gross, and fun things possible with vat-grown organs!

I’ll dig into the misconceptions behind some common sci-fi tropes about organogenesis—the complex process by which cells grow into organs. Then, I’ll offer some tips on how to make your story’s vat-grown flesh more believable.

I know: I keep saying “vat-grown flesh.” That makes it sound like you just need a bucket of chicken broth and some stem cells (Worst. Soup. Ever). To grow something as big and complex as an organ out of billions of different, specialized cells, your characters will need at least six things: cells; a cell scaffold; nutrient broth; stimuli; the right place; and money.

As if growing organs wasn’t hard enough, here are a few of the problems that your characters could face once those shiny new organs are implanted:

How to do it right!

When it’s time to start growing and grafting some organs onto your characters, here are a few questions to think about to make your “vat-grown flesh” more believable: