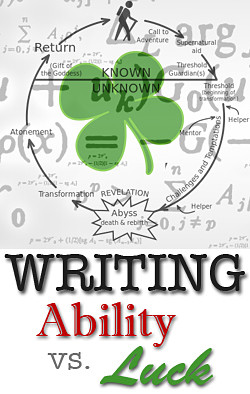 Today’s expert is biostatistician Dustin Fife. He received his PhD in Quantitative Psychology from the University of Oklahoma. He’s published stats articles in various quant psych journals including Educational and Psychological Measurement, Multivariate Behavioral Research, and The British Journal of Mathematical and Statistical Psychology, and currently works as the Senior Biostatistician at OMRF.

While riding the bus to and from his day job, Dustin writes science fiction. He’s completed 2.9378 novels and he’s seeking representation for his first book (his “baby”), slaving to finish his third, and simmering his second in a locked drawer. To learn more about Dustin as a writer, visit his writing blog. To learn more about his work with statistics, visit his stats blog.

Ability and Luck in Writing

This article’s going to be a bit different. Most scientists visit Dan’s blog with pet peeves about scientific blunders committed in fiction. The truth is, there’s nothing about statistics that’s interesting enough that folks would want to even attempt to write about it. Alas, statistics myths are confined to the media (where they tend to do the most damage). But, we can use some principals from stats (and a special flavor of statistics called Quantitative Psychology) to shed some light on how best to portray the people that populate our prose.

Quantitative psychologists (QPs) specialize in three things (1) Measuring psychological traits, and as a consequence (2) angering students who have to trudge through standardized tests, and (3) angering parents who believe (and often rightly so) that a child’s ability cannot be measured by a single number. (Though, as an aside, we’re no more at fault for the policy of test-taking than paper companies are for printing them. However, that didn’t stop Hollywood from portraying two QPs as the bad guys in the movie Stand and Deliver).

Despite the preponderance of techno-babble, there’s really not that much to measuring something psychological. It all comes down to this simple formula (and a whole lot of fragile assumptions):

For example, suppose we’re trying to measure a kid’s IQ. His score on the test can be attributed to his IQ (Ability) and chance factors (luck or no luck), such as whether the kid had a hangover, trippy wording on the item, the temperature in the room, etc.

When a QP sits in front of a computer with a database of test scores, what he tries to do is use fancy-pants statistics to partition the scores into those two components: Ability and Luck. But before she or he ever gets in front of the computer, s/he does his/her darndest to make sure the test measures mostly ability and little luck. Here’s three ways we do it (which will have implications for writing…I promise).

Ever wonder why that stupid test is four hours long? It’s because we assume “luck” will even out in the long run. So, if on question #1, you thought it said “breast” instead of “beast” (I did that once while reading aloud in church….very embarrassing) and got the item wrong. Well…that sucks for that one item, but chances are you will probably accidentally guess another item right, so it all evens out in the end.

2. Vary the difficulty of the items.

If all questions were easy, pseudo-smarties and geniuses would both score perfectly. Likewise, if all questions were tough, we could separate the Einsteins from the Jones’, but would suck at determining the Forest Gumps from the Forest Whitakers. Ideally, we’d administer items from a range of difficulties (or even better, adapt the test to their performance).

3. Recognize that luck plays a role.

I’m a firm believer that every character needs to have one or more dominating traits. Sam is loyal while Gollum is self-serving, Eddard Stark is honorable while Cersei Lannister is despicable, Ender Wiggin is empathetic while Bonzo Madrid is ruthless, Hermione is intelligent while Ron is dense. Just like QPs try to measure ability, as fiction writers we need to convey ability. And we can steal these same three strategies.

Every. Single. Page. Should be dripping with cues about what sort of character your MC is (or for that matter, all characters). A reader should be able to randomly choose a page and say, “yep, that’s Tom for ya,” or, “that’s exactly the type of thing that Tom would say,” or “It doesn’t surprise me at all that Tom would wear those clothes,” or “I would expect Tom to do something like that.” Of course there’s always room for surprises and for your characters to do something uncharacteristic, but that’s where the next part comes in.

2. Vary the difficulty of the situations.

Wanna show that your MC (we’ll call her Gwendalin) is compassionate? Okay, so maybe you start with her in the middle of a war, helping gather people into a bomb shelter. I suppose that works okay. She’s certainly being compassionate, but at the same time, there’s something about a major crisis that tugs lots of people’s heartstrings, even people who typically don’t show compassion. This is akin to an “easy item” on an exam. If you really want to illustrate Gwendalin’s compassion, show her tenderly treating the burns of the man who murdered her son. Show her offering shelter to a war criminal. Take us to the boundary of her compassion, and then go further!

Is your character Eddard Stark? Make him choose between honor and the lives of his daughters! Is your character the brilliant Sherlock Holmes? Give him an adversary that’s more intelligent than he (Moriarty). Want to show that Sam is loyal to Froto? Give him the ring that corrupts everyone and see what he choses then! Wanna show Jack Shepherd (from Lost) is a skeptic? Have him face the smoke monster!

Both luck and ability play a role in stories, but sometimes stories rely on one more than the other. There are superman stories, where the hero always succeeds because they’re totally “awesome” (boring), and there are the What About Bob stories, where the hero always succeeds because of luck. Neither extreme is good. Here’s my rule of thumb: at the end, the character must defeat the villain because of ability (not luck). In the middle, let them fail because of bad luck (although having them fail due to lack of ability also works). She leans in to kiss the hunky-hunk, but the doorbell rings. He tries to escape prison but a fire alarm goes off. They fail to steal the diamonds because of a computer glitch. When in doubt, remember the try/fail cycle.

Having a stellar plot is great, but if it involves characters that we don’t care about, the sweetness of your spectacular plot will be muddled, kinda like drinking a vintage wine from a chewed up sippy cup. But if we can peg your characters because you are characterizing repeatedly, throwing them in tough situations, and spoiling success with bad luck (and defeating the villain with ability), you’ll have characters with enough “muscle” to carry the plot.