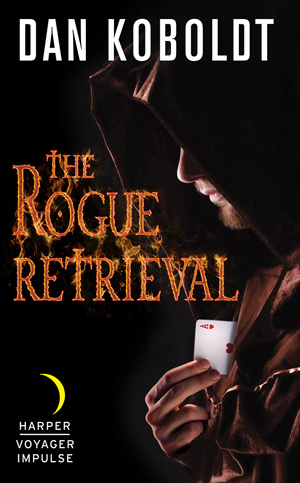 Last week we held the Rogue Retrieval Cover Reveal Challenge at Suvudu, which was an absolute blast. I thought you’d like a behind-the-scenes glimpse of how the challenge (and the cover itself) came to be.

One of the lesser-known facts about publishing is that the cover design (and the title, for that matter) is completely up to the publisher. David Pomerico, my editor at Harper Voyager, was kind enough to ask if I had any ideas.

I’d been kicking around a few, but communicating them effectively was harder than I thought. When you have an idea in your head of how people, places, and events look, it’s not easy to find existing art that matches it well. It’s one of those times that I wish I was an artist myself.

I love the concept that Harper Voyager’s art department developed. The card out of the jacket tells you he’s a modern magician, but the cloak screams epic fantasy. It’s a perfect fit for the book’s premise of a Vegas illusionist in a medieval world.

I wanted to do something unique and interactive when we revealed the cover, so that everyone who saw it could take part in the event. The technomancy of the sliding puzzle pieces is something I’ve had in my back pocket for a while. It uses a JavaScript package called jqPuzzle, which was developed by Ralf Stoltze, and builds on the open-source Javascript library jQuery.

Other than a necessary compatibility patch, this code worked right out of the box. All it requires is a little HTML/CSS and an image file. The downside of JavaScript, of course, is that it only runs in browsers that have JavaScript enabled. It didn’t work for Javascript-disabled browsers (like the one on my wife’s phone). Luckily, most people got it to load.

I could go on about the technical stuff, but I can sense your eyes glazing over. Let’s move on.

I set up a demo page for the cover challenge at a private URL so that the team at Harper Voyager could have a look. My publicist liked it, and asked if she could pitch it to some SF/F website. Suvudu, the SF/F fan site of Del Rey Books, was immediately receptive.

At first, I found it surprising that Del Rey, which is owned by Random House, would host a reveal for a book by Harper Voyager (owned by HarperCollins). Upon reflection, I realized it actually makes a lot of sense. Suvudu is a site for fans of science fiction and fantasy; if they only ever talked about Del Rey publications, they’d be missing a lot. All things being equal, it’s in the interest of SF/F houses to support one another’s books to drive continued interest in the genre. A rising tide, as they say, lifts all ships.

Suvudu, by the way, is an awesome resource for sci-fi/fantasy fans. It’s like Tor.com, but with more Star Wars. I highly recommend you check it out.

My publicist (whose name is Caro) put me in touch with Emily Hughes of Penguin Random House, who helps run Suvudu behind the scenes. She was fantastic to work with, and almost excited about the reveal as I was. It took us a few days to overcome some technical hurdles, but by Tuesday of last week I knew that the reveal was a go. I quickly spread word everywhere that I could — my mailing list, Twitter, the PitchWars mentors, my publisher-siblings, etc. The people at Suvudu also spread word to their network.

The turnout on reveal day was fantastic! Some people couldn’t beat the easy (3×4) version of the puzzle, whereas others wouldn’t quit until they beat the hard (4×5) one. I tackled the easy puzzle myself over lunch on Thursday, and managed a pretty good time:

Most importantly, everyone who came out had a lot of fun. That’s what we were going for.

Everyone came out swinging to help spread word about the reveal, and I couldn’t be more grateful. Suvudu saw about 600 pageviews on Thursday alone, and we had 121 entries into the giveaway. I used Rafflecopter to create the widget and manage the giveaway. There were 5 ways to enter, and here’s how people chose to do so: 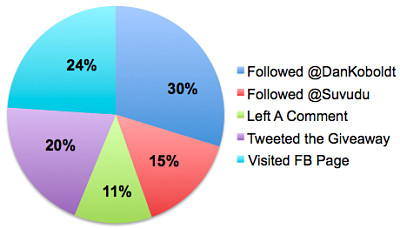 It was a real thrill to see the comments, tweets, Facebook likes, and new follows by challengers. Rosalyn Eves and Emily Hartshorn were the two lucky winners of the prize packs. Stay tuned, because the giveaway was so much fun that we might be doing another.

I should say thank you to David, Caro, and the others at Harper Voyager, as well as Emily and her team at Suvudu, for making this reveal happen. I’d also like to thank anyone who tweeted, posted, shared, or participated in the cover reveal challenge. This was a really fun event. Let’s do it again sometime!