This article about ethology and animal communication is part of the Science in Sci-fi, Fact in Fantasy blog series. Each week, we tackle one of the scientific or technological concepts pervasive in sci-fi (space travel, genetic engineering, artificial intelligence, etc.) with input from an expert.

William Huggins lives, writes, works, and explores the desert in and around his southwestern home with his wife, daughter, and three rescue dogs. He graduated from the University of Las Vegas, Nevada with an MA in Literature with an emphasis on environmental issues.

His most recent science fiction story “Watercharmer” appears in the anthology Universe VII: Visions from Lillicat Publishers and his essay “Suffering for Utopia” will appear in the forthcoming issue of The Journal for Critical Animal Studies.

The Emerging Science of Ethology

Possibly many of us decided to become writers because stories engaged and enamored us at an early age. From Winnie-the-Pooh to The Lorax to the simplicity of the Llama Llama books, nonhuman animal characters get their own unique voices. Engaging in speculative fiction when older, writers allow nonhuman animal and otherworldly alien characters to speak with voices of their own, as well, but within a more mature context.

As Henry Beston wrote, “For the animal shall not be measured by man. In a world older and more complete than ours they move finished and complete, gifted with extensions of the senses we have lost or never attained, living by voices we shall never hear. They are not brethren, they are not underlings; they are other nations.”

What if nonhuman animals actually do communicate with languages unique to themselves and their species? How would new information like that impact science fiction writers portraying nonhuman animals?

Considering the emerging science of ethology, or the intensive study of nonhuman animal behaviors, these are fair questions. Marc Bekoff and Jessica Pierce started a minor ethological revolution in 2009 with their book Wild Justice: The Moral Lives of Animals. More recent studies and revelations have taken ethology in interesting—to me, at least—directions.

One of the cornerstones of intelligence entails the use of language. Clive Wynn writes that, “The communications systems in place in nature are quite amazing…but they are not like human language. What we communicate to each other is not just different from what members of any other species can communicate to their fellows; it is many orders of magnitude more powerful.”

Based on new research and data, Wynn’s conclusion may well be incorrect. Consider two ideas as you peruse the examples below:

If we’re wise enough to use current and emerging technology properly and with some humility, we may be able to look beyond our definitions of intelligence and communication beyond assumed human norms. Leaving behind human-taught skills such as the great apes using sign language or parrots simply repeating what speakers say, many species use language to a greater or lesser extent. Here are a few examples. 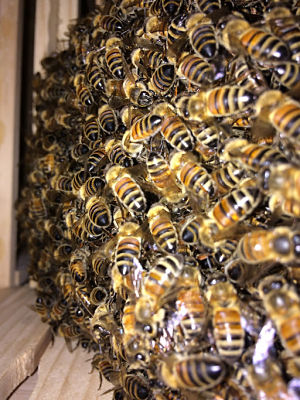 Bees (courtesy of B. Nogrady)

Last week, beekeeper Bianca Nogrady this form of communication in her article on bees and beekeeping. Today, we’ll dive deeper.

There are two primary types of bee dancing, the round dance and the waggle dance. Better sources of pollen get livelier dances. Bees are able to convey exact directions to nectar sites, rivaling our species’ GPS networks that many of our so-called advanced members still can’t use properly. In dimmer hives, some bees emit sounds to aid in orientation.

Other insects use their communication skills to great effectiveness, too: in 2015 scientists revealed the chemosensory proteins ants use to communicate with one another. Who knows what future scientific breakthroughs might reveal? Ants and bees have both occupied the planet for over 90 million years. They no doubt learned a few things in that time.

A little insect literature, anyone? Maybe look to Ursula K. Le Guin’s “The Author of the Acacia Seeds” as a potential discovery.

Elephants, one of the largest land mammals, live in complex social groups. Their systems of communication are equally varied. They use visual, olfactory, and vocal cues to communicate a wide range of information and emotion. Elephants are known to mourn passed loved ones, covering them with dirt in rituals reminiscent of human burials.

Elephants use low-frequency rumbles, or infrasounds, by which they can communicate over a mile. Most of us read the Babar stories in childhood, but Barbara Gowdy’s The White Bone takes elephant cognition and communication to a whole new level. Speculative fiction writers could use her sad, mournful tale as a template, imagining a reality entirely from the elephant’s perspective.

Whale songs have long been perceived as a complex form of communications between cetaceans, from dolphins to blue whales. Scientists used soundings and mathematical formulas to confirm these vocalizations are language. Different species of cetaceans have different forms and varieties of speech, creating their own dialects. 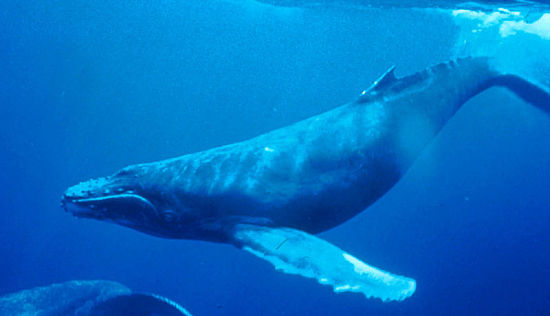 Of course we have the obvious example of Star Trek IV: The Voyage Home: off-screen, analysis of humpback communication shows syntax and/or grammar in complex songs. But also consider the dolphins in David Brin’s Uplift series, specifically Startide Rising. Dolphin haiku, anyone? There’s also Robert Silverberg’s “Ishmael in Love” — a first-person narrative told by a dolphin.

Even more recent findings show that mother and infant gray whale calves “whisper” to one another in a soft language to keep the young safe from predators. Undoubtedly that early communication continues in ways we have yet to discover.

Pigs have long been known to possess basic language skills. Much research shows our porcine kin test higher than dogs or even three-year old human children, who clearly can use basic language. Pigs also work together to solve complex problems, such as escaping confinement or solving puzzles. They play video games and assist other pigs caught in difficult circumstances.

Naomi Lavelle notes that pigs communicate with one another and transfer knowledge, making multiple sounds to convey information as well as emotional needs or concerns, and that mother pigs vocalize with infants to communicate feeding times. 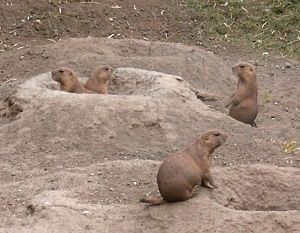 To me, one of the most interesting developments on nonhuman animal language potential is the work of biologist Constantine Slobodchikoff. His twenty years of research show that communication patterns among prairie dogs has shown that they have the most sophisticated animal language decoded so far. Their use of ‘language’ includes not only nouns, but modifiers, and the ability to coin new words. To date, one hundred words have been identified among Gunnison’s prairie dogs.

As mentioned above, our ability to get into places where nonhuman animals live and thrive that were previously inaccessible to us opens opportunities for more revelations like the Gunnison’s prairie dog. Long looked at as a nuisance, especially by developers, that a species like this could present such social sophistication truly makes one wonder what else might be waiting to be discovered in other species.

Of all genres, science fiction should not be hindered by outdated beliefs on nonhuman animal cognition. As Beston notes above, we share this planet with other nations. Their stories in their own voices are just as important as our own human ones. While it is essential to write nonhuman animals in story as closely as science confirms, we should also return to one of the things that perhaps drew many of us to writing in the first place: because stories are fun.

Using the latest information from ethologists can only make our stories better. Just like Brin’s smart-aleck dolphins, we science fiction and fantasy writers should challenge ourselves to create nonhuman animal characters that convey a diversity of behavior, interests, seriousness, horniness, and humor. What kind of jokes a might prairie dog tell?

While it may be easy for certain elements of our society to play down this emerging field, we would do well to listen. It’s entirely possible nonhuman animals are trying to tell us something we should hear—about what’s important to them, about sustainable futures with diverse literary and biological ecologies.

Consider Ted Chiang’s “The Great Silence,” a very short story that wonders why we’re so obsessed with finding life on other planets and deaf to so much of it here, told in the voice of an endangered parrot species. Stories can not only map our past but also be guides to better futures. As writers, we should be open to listening to all the voices out there, and recording them in story—all voices, because neither the stars nor the Earth exist only for us.