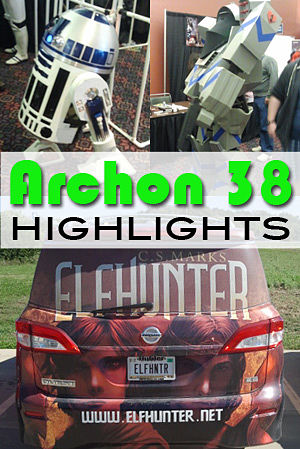 This weekend I went to Archon 38, a fan-run science fiction / fantasy convention held annually near St. Louis, Missouri (hence the name). It’s my first con appearance, so I thought I’d share my impressions.

The organizers were kind enough to put me on a few panels, which got me into the “pro” category of attendees. This is no small thing: there was a packet waiting for me at a special, express registration desk. There was a shiny AUTHOR ribbon for my name badge. And I was delighted to learn I had access to some kind of “VIP room” in the nearby hotel.

My first panel was called Genetic Engineering: Tinkering with the Human Body and moderated by H.G. (Henry) Stratmann. He’s a cardiologist and science fiction author (dozens of stories in Analog), and an old hand at this. We got to talk about next-gen sequencing, human genetics, designer babies, and other topics with a wonderfully inquisitive audience.

Portal Fantasies: Across Time and Space was my second panel, one I shared with a great group of authors: Mark W. Tiedemann, Kasey Mackenzie, and G.P. Ching. Mark was the only panelist who hasn’t written a portal fantasy, but he’s an industry veteran who had plenty to add to the discussion. I enjoyed an excuse to talk about THE ROGUE RETRIEVAL, since it falls into that category as well.

My third panel was on a hot topic: Publishing in the Digital Age. The other panelists were far more qualified: G.P. Ching has published 9 books since 2011 (she writes 2,000 words a day!) and Trudy V. Myers, who recently had a story in the hilariously-entitled anthology These Vampires Don’t Sparkle. We had a wonderful discussion on self-publishing, print-on-demand, marketing, cover design, promotion, etc. The hour really flew by.

I didn’t get to attend nearly as many panels and events as I would have liked, but I enjoyed Archon 38 immensely. The event drew an enthusiastic crowd, and the organizers put together a fantastic program. Some of my favorite parts:

Archon is a great convention. If you can get out to St. Louis next fall, I highly recommend it.