Tom Benedict has a bachelor’s degree in astronomy, and has spent the past fifteen years working as an instrument specialist at the Canada-France-Hawaii Telescope at the summit of Mauna Kea. You can take a look at his blog, in which he writes about observatory life, engineering, and hobbies. You can also find him at A Ticcing Life, in which he writes about life with Tourette’s Syndrome.

Despite the close link between astronomy and science fiction, few science fiction stories include the basic tool of astronomy: the telescope. Those stories that do tend to stand out, either because they got the details right or because they got them so very wrong. In the interest of having more stories that get the details right, here are some common misconceptions about the business of optical astronomy, a look at how optical astronomy is done today, and speculations about astronomy’s future:

A good place to start is the movie Deep Impact. The first telescope scene, in which a high school astronomy club is watching the sky and one of the students, Leo Biederman, spots a strange object, is actually pretty accurate. Amateur telescopes outnumber professional observatories by a huge margin, so many transient events – supernovae, comets, or Earth-killing asteroids and comets – are reported first by amateur astronomers.

Where the movie’s portrayal of astronomy began to break down was in the second telescope scene, in which Dr. Wolf confirms Mr. Biederman’s object at the Adrian Peak Observatory. After aiming the telescope with a hand paddle, Dr. Wolf sits down at a bank of monitors next to the telescope to munch pizza and see what Mr. Biederman saw.

Unfortunately, the light from a computer monitor or desk lamp is enough to blind a detector that’s sensitive enough to image the night sky. Like the reader of a good mystery novel, telescopes have to be kept in the dark. Modern observatories are controlled from rooms located somewhere else in the building or from a remote site far from the observatory.

Increasingly, astronomers aren’t even the ones making the observations. It’s more efficient and cost effective for observatories to hire professional observers and telescope operators to collect data, process it, and hand it over to the astronomers so they can use it for science. An accurate portrayal of that second scene would’ve had Dr. Wolf eating pizza in his office, requesting target-of-opportunity time for Mr. Biederman’s object to be observed by an observer (who might have had pizza of their own.)

All of this means that the classic science fiction setup – the lone astronomer witnessing that magic moment when they, and they alone, see the Doomsday Asteroid, and the fate of the world rests upon their shoulders – really doesn’t happen. That moment is more likely to be experienced by an amateur like Leo Biederman, or by an astronomer in an office thousands of miles from the telescope.

Observatories are in the business of taking on-sky data and handing it over to astronomers for analysis. The modern observatory resembles, in many ways, a cross between a university research lab and a medium-sized factory. Depending on the size, the staff of a modern observatory ranges from a handful of employees up to several hundred, and includes every role you’d find in a typical office – accounting, HR, purchasing, IT, etc. – as well as the software developers, engineers, and technicians required to keep the place running, the observers and telescope operators who take data at night, and the staff astronomers.

Astronomers themselves typically make up only a small percentage of the staff at a modern observatory, and some telescopes don’t employ staff scientists at all. Most astronomers work at universities rather than observatories.

The data is collected by electronic detectors, almost all of which are cryogenically cooled to reduce heat-induced signal noise. Astronomical detectors are almost all black and white devices. Color images are built up by taking several exposures with different filters in front of the detector. As backward as this may sound, it provides the most flexibility for gathering scientific data. Rather than only gathering red, green, and blue pixel data like a color detector, this allows an astronomer to request data through other filters that can pick out a single emission line, or image wavelengths the human eye can’t see. 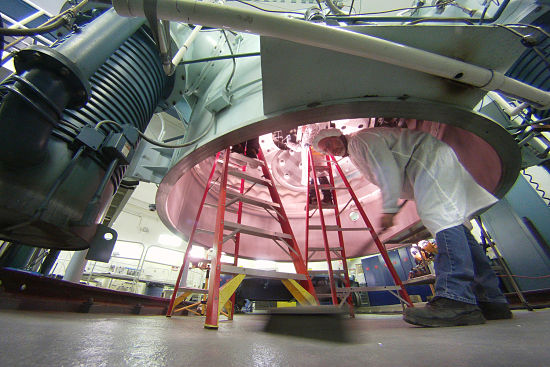 It also allows astronomers to make new filters to fit a particular science case without having to replace the detectors in an instrument. What this also means, though, is that the pretty color pictures we see on posters and in calendars have to be made, after the fact, by combining black and white images.

Contrary to popular belief, practically no one at an observatory wears a lab coat or a pocket protector. On the rare occasions when lab coats are worn it’s almost always by technical staff working around optics. When instruments are disassembled for servicing, that lab coat is traded out for clean room garb identical to that worn at factories that make computer chips. If there was an observatory dress code, it would be jeans and a shirt.

Along with the myth of the lab coat goes the myth of the technobabble. Although every technical and scientific field has its own form of jargon, for the most part people use everyday language to describe what they’re doing. For example, someone at an observatory is less likely to say, “Affix that support mechanism to the unstable apparatus,” than they are to say, “Brace that thing. It’s wobbly.”

The only time technical jargon comes into use is when it specifically applies. A lens really is a lens, and will be called a lens by layman and engineer alike. But when talking about optical aberrations the optical engineer will speak in terms of Zernike coefficients because that really is the right term to use. If a part of your story hinges on a technical point, be sure to look up the proper terms. Otherwise, plain language works just fine.

There is no single overarching personality type that defines the people who work at observatories. As with any other professional field, they run the full gamut. I’ve worked with introverts, extroverts, focused people whose entire lives revolve around their professions, and people who have any number of outside interests. Those interests have included music, photography, art, dance, cooking, sports, woodworking, even pursuit of their own field in some other direction like home shop machining, DIY electronics, and robotics. When writing characters to inhabit an observatory, be sure to develop them the same way you would develop any other character.

In addition to the telescope itself, the kinds of machinery you find in a modern observatory include all of the machinery typical of a large building such as elevators and air conditioners, as well as the kind of machinery found in a factory, such as cranes, fork lifts, scissor lifts, air compressors, and hydraulic plants. Some observatories have their own machine shops and welding shops as well. Larger observatories have their own clean rooms for working on detectors, and lab space for working with optics and electronics.

The Future of Astronomy

None of these details are likely to change in the foreseeable future, even into future science fiction settings. But the larger scale picture changes constantly and has a couple of clear directions:

New telescopes only get built if they fill a niche that isn’t already filled. At the moment the three big drivers are mirror size, image quality, and access to new wavelengths. Desire for larger mirrors that will let us see further out into space has led us to build a slew of new telescopes including the Giant Magellan Telescope (GMT), the European Extremely Large Telescope (E-ELT) and the Thirty Meter Telescope (TMT). Desire for better image quality leads us to build these new telescopes in remote parts of the world at high altitude with stable air. Desire for new wavelengths drives development of new detectors, and to put telescopes in places where certain wavelengths aren’t blocked by atmospheric absorption, such as the South Pole or out into space. 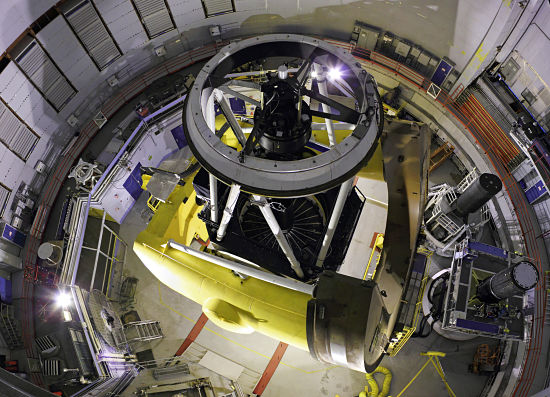 Another key driver for future development is time. There are only 365 nights a year, or about 3000 hours available for observing. Weather and technical failures eat into that, so the actual figure is considerably less. This is true regardless of the size of the telescope or the instrument suite available to it. Some science programs require large blocks of uninterrupted time that may run into tens of thousands of hours of sky time. This has led to the development of dedicated survey telescopes that host only a single instrument, such as the Large Synoptic Survey Telescope (LSST), the Hobby-Eberly Telescope Dark Energy Explorer (HETDEX), and PanSTARRS – a telescope dedicated entirely to early detection of Earth-crossing asteroids and comets. (Sorry, Mr. Biederman.)

If you are writing a story that includes a telescope that doesn’t already exist somewhere in the world, make sure it fills a niche that addresses at least one of these points or a new point that might become a consideration in the future, such has having telescopes on the far side of the moon or orbiting some distant star. And be sure to give it an appropriate name. If the previous section didn’t convince you that astronomers don’t always come up with great names, this might: The OWL Telescope was a conceptual design by the European Southern Observatory. OWL stands for “Overwhemingly Large”.

Be sure to use your imagination.