Right now there are two major forces influencing the e-book bestseller lists at major retailers. One of those is Amazon’s Kindle Unlimited, the subscription program that gives avid readers access to millions of titles for $9.99 per month. Although royalties are calculated based on actual pages read, KU borrows essentially count as sales in Amazon’s ranking algorithm. A growing majority of titles topping Amazon bestseller lists are part of the KU program.

The other significant market force is BookBub, the free/discounted book notification service. BookBub sends a daily e-mail of curated discount e-books to millions of subscribers. The books featured in these daily deals sell thousands of copies within 1-2 days, propelling them to the top of the Amazon bestseller lists in their categories.

Back in 2015, I crunched the numbers of BookBub deals using data provided on their website on March 1, 2015. Back then, the average BookBub featured promotion:

How BookBub Has Changed

A lot can happen in three years. When I wrote my first BookBub analysis post, I had an agent but breaking in still seemed like an impossible task. Now I’ve published three fantasy novels with a major publisher. BookBub, too, has had some success. They’ve grown their curated lists, added new categories, and launched a paid advertising platform. Some broader categories have been broken into more focused ones, e.g. cozy mystery and historical mystery have replaced mystery.

One thing that hasn’t changed is BookBub’s position as the dominant free/discounted book promotion service in the market. There are rumors, in fact, that many of their would-be competitors are losing ground.

BookBub continues to provide detailed performance data for featured deals on their pricing page, which I appreciate. My updated analysis uses a snapshot from April 24, 2018. First, let’s look at the subscriber counts across BookBub’s 42 categories:

There’s undoubtedly a lot of overlap here, as readers are likely to have opted in to multiple categories. The largest category, interestingly, is “Crime Fiction” which is essentially thrillers involving murder. Now, let’s look at the cost of running a promotion for a book priced <$1 using the same category order:

You may notice that the price of running a BookBub promotion does not always correlate with the number of subscribers. That’s because, as BB is undoubtedly aware, not all categories perform the same in terms of actual sales. Here are the average sales by category:

You’ll note that this tracks much better with the price of running a promotion, which suggests that BookBub considers the performance of each category when setting their prices.

So how well does a BookBub featured deal convert? On average, one sale for every 800 subscribers.

Let’s dive deeper into that idea of performance using ten categories that I think will interest the audience. For simplicity, I’m using cozy mystery for “Mystery” and contemporary romance for “Romance”. There are three panels in the figure below:

The categories are sorted not by subscriber count, but by the cost per sale. That third plot has a threshold marked by a dotted line at $0.35, which is the estimated royalty paid by Amazon for a book priced at $0.99. Three of the genres shown have a cost-per-sale that exceeds the royalty, suggesting that an average-performing title in that category costs more than will be recouped in royalties.

Some patterns here are unsurprising. For example, promotions on children’s books do not perform well (the ROI was -39%), probably because most parents (like me) buy physical books rather than e-books. For those who do read e-books, Amazon’s FreeTime Unlimited subscription program offers thousands of children’s books for free. To be fair, Children’s is one of the least expensive BookBub categories ($176 for books <$1) but it’s still overpriced.

Other patterns are more disconcerting. Both mystery categories (cozy is shown; historical is similar) have massive subscriber lists (~2.9 million each) but yield the second- and third-worst ROIs (-24% and -22%). Horror books have a more modest subscriber count (about 1 million) but also a negative return (-13.4%, 6th worst overall).

I don’t know much about either genre, but I can say that while a BookBub for either mystery or horror is likely to lose money, the mystery title will lose a lot more money. Four times as much, because the conversion rates are similar (0.8-0.9%) but mystery promos cost a lot.

The performance of mystery titles surprised me a bit, because that category shined in my 2015 analysis. So I decided to systematically compare 2015 and 2018 data to better understand what else may have changed.

In this analysis, I compare the BookBub performance data from April 24, 2018 and March 1, 2015. These comparisons necessarily only include categories that existed in 2015. In the first plot I excluded mystery, which was broken into two categories with similar subscriber counts now (2.9 million) as the broader category had in 2015. For the others, let’s look at the number of subscribers on each list. These are sorted by relative growth from most to least:

The seven left-most categories more than doubled in size, led by the True Crime category which grew by an astonishing 465%. On the far right side, children’s and middle grade categories along with religious/Christian saw the least growth (<50%). Across all these shared categories, the lists grew by 85%, from 762,401 subscribers in 2015 to 1,409,401 in 2018.

Of course, the number of subscribers wasn’t the only thing to grow. The cost of running BookBub promotions has also gone up. Here’s a comparison of the price for a promotion for a book priced at <$1. These are sorted by the relative price increase from lowest to highest. 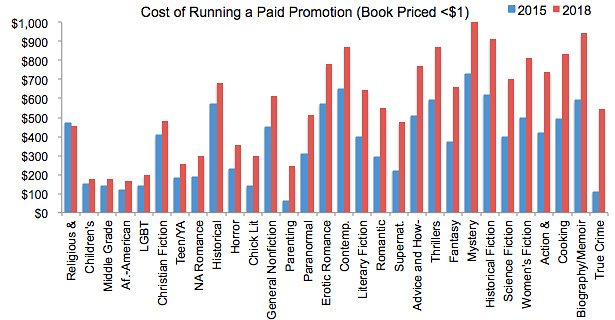 The average cost of such a campaign increased 55% from $367 to $568. All but one category increased in price. True Crime saw the biggest hike (quadrupling from $110 to $544), though in fairness, the subscriber count also increased by 465%.

Despite the subscriber growth (and price increase), BookBub has also faced some challenges. The conversion rate — the fraction of subscribers who purchase a promoted book — has fallen in almost every category: 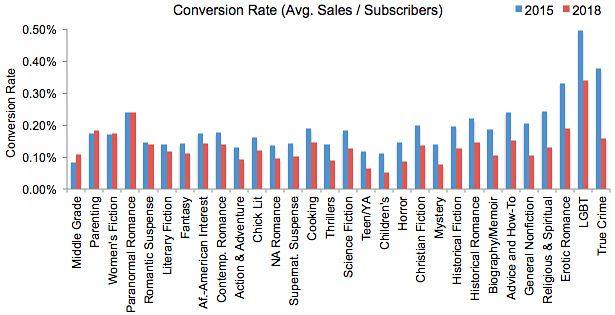 The Cost of Reaching New Readers

This brings us to the final comparative analysis, in which I examine the cost per sale across shared categories, i.e. how much the author or publisher pays for each new reader. 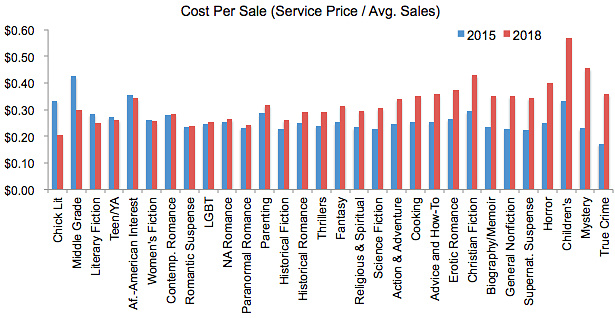 Here we see the ultimate consequence of the increased promo price paired with a decreasing conversion rate: it costs the author/publisher more to make each sale via BookBub. The average cost per reader rose from $0.262 to $0.322 over the past three years. That’s an increase of 23%. It also puts the up-front investment close very close to the expected return (royalty for a $0.99 e-book).

My principal concern is this: the average sales per category are estimates. The price that you pay for a promotion is not an estimate; it’s the official price. And many of these margins are tight. If your campaign under-performs, you’ll likely lose money running a BookBub featured deal.

Bottom line, while I’m pleased to see how much BookBub has grown their business, I worry that featured deail promotions in many categories will become, at best, break-even propositions.