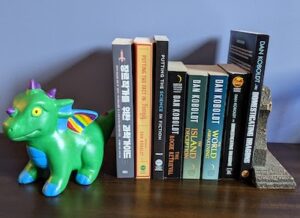 Today I have the joy, honor, and privilege of announcing a new book. It’ll be my eight book overall and my third book published in 2022, which is rather hard to believe. I know that makes me seem like an incredibly prolific writer. Man, do I wish that were the case. The real reason is that the publishing industry tends to move rather slowly. Against the backdrop of that glacial movement, I’ve been steadily plugging away. We pitched Putting the Fact in Fantasy two years ago and delivered the manuscript in mid-2021. I started writing Silver Queendom, my forthcoming epic fantasy heist that comes out in August, back in 2018.

Yet my longest-running project by far is Domesticating Dragons. I started it in November 2014, months before I’d sold my first book. At around that time, Tor.com had announced their new novella imprint, and I liked the idea of writing 40k words rather than 90-100k. The novella version of the story was tight and I liked its chances. I submitted it to the first novella call. A friend had submitted as well (a few slots ahead in the reading queue), and we kept in touch as we watched our queue positions creep down toward 1. We’d reached single digits when the queue just stopped. Which was weird; it had been moving steadfastly for weeks. Then I heard from my friend: she’d gotten an offer. I checked my status, and my project was no longer in the queue. Excitement!

I later learned that the first reader had liked my novella and passed it up, but the editor rejected it. By this time I had my deal with Harper Voyager for The Rogue Retrieval, which took some of the sting out. Still, I had to make a decision: sell the novella somewhere other than Tor, or make it into a novel. The second option was more work but seemed like the right choice. (That friend of mine, by the way, went on to win a major award for her novella).

Shortly after my first book was published, my life got pretty complicated. I changed literary agents, got a new job, and moved (with my wife and kids) away from everyone we knew to another state. I wrote two more books for HV. I also started doing more nonfiction, drawing on my background as a genetics researcher, and this included writing some articles for Baen for their website. My contact was Tony Daniel, and although it wasn’t widely publicized, he sometimes acquired books for the publisher. My new agent sent him the manuscript, and the rest is history.

The next part is one of those nuanced “Author Life 202” stories that you don’t hear very often. It was mid-2020, I’d finished Silver Queendom, and we wanted to shop it around. We’d also signed the contract with Baen. It was still early in the relationship, but I already enjoyed working with them. Even so, Queendom was epic fantasy and not really in Baen’s wheelhouse. Also, with summer looming I wanted the manuscript to go out as soon as possible. (If you don’t know, publishing slows to a crawl over the summer months and it’s a terrible time to be on sub). My agent empathized with that feeling, but pointed out that Baen, as my current publisher, might not take it well if we didn’t show them the book first.

It seemed silly and wasteful to send an editor a book we know he wasn’t likely to buy. So I asked Paul to give him some options. We basically said, This is Dan’s next book. He really enjoys working with you, so if this is not what you’re looking for, he’d be happy to write something else for you, i.e. another dragon book. We left out the part where I had no concrete idea for another dragon book. I’d always considered Domesticating Dragons as a standalone.

As expected, Tony did not think Queendom was right for Baen. However, he said they would quite like to see a synopsis for another dragon book. This was in the summer of 2020, so my first book with them was still six months away from publication. In other words, this represented an act of faith on the publisher’s part because they really had no idea what would happen with Domesticating Dragons. I appreciated that, and so I came up with an idea that I believed would do well to their audience: a sequel in which Noah Parker and his team are tasked to develop military-grade dragons.

Baen liked that idea, too.

So it’s an absolute thrill to announce that Deploying Dragons, book two of the Build-A-Dragon Sequence, will be published on September 6th, 2022. My new editor, Jim Minz, has been incredibly supportive. The book is already in proofs and available for pre-order. I leave you with this awesome cover, which is once again the work of the talented artist Dave Seely: