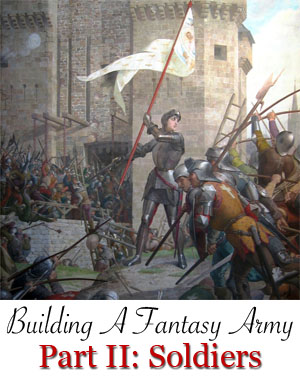 Siege of Orléans by Jules Lenepveu (1890)

Michael Mammay has served as an active duty US Army Officer for almost 26 years, and holds a masters degree in military history. In his spare time he writes Science Fiction and Fantasy, usually with military influences. You should follow him on Twitter.

War makes a good source of conflict. Perhaps that’s why so many fantasy novels have war either as a main premise or a backdrop. In the previous post we looked at the leaders. In this post, we’ll look at the common soldier, who is the building block of any army. As with leaders, a key factor is writing soldiers who represent the ideals and economy of the culture that shaped them. In this post we’ll look at some cultural and economic factors that affect your fantasy army.

Before we look at where individual soldiers for an army come from, let’s look at the army as a whole. One of the biggest cost considerations is whether your soldiers are professional or whether they only show up when it’s time for war. For the purposes of this article I’ll be focusing on pre-industrial societies. In The Wealth of Nations Adam Smith discusses how in pre-industrial societies, war tended to be supported by the actual participants. If you wanted an army, you as an individual paid for it. The ability to bear that expense is a key factor that an author must consider both in terms of size and composition. In this section we’ll look at three possibilities: standing armies, war-time call-ups, and mercenaries.

Standing armies are expensive. You have to pay them, even when you’re not using them. Most pre-industrial economies were founded on manual labor, and maintaining non-productive people creates strain, especially over time. You can write around this, as long as you keep the required economy in mind. You can create a nation with an economy that can support a standing army by giving it natural resources, or by centering the economy on war. A nation that uses war to take resources from its neighbors can shift the economic burden to defeated foes, for a time. Authors such as George R.R. Martin and Peter V. Brett provide good examples, artificially enriching one nation to create an economy that can support war.

Even in the most advanced societies, the size of a standing army is limited by cost. If you consider the Roman Empire, most estimates suggest the standing army reached a peak of between 300 and 400 thousand. The peak population was somewhere around 70 million, which means the army was roughly half of one percent of the population. In an economy driven by industry (mundane or magical), the cost of your army will be divided between the technology and the number of people required to maintain and operate it.

A more common means of building an army historically involved calling on troops only when needed. This is especially true in agrarian societies where farms required large amounts of labor in the spring for planting and the fall for harvest, leaving the summer free for a nice skirmish with the neighbors. Elements of this are visible even today, as fighting often slowed in Afghanistan during poppy harvest season. As farmers or other manual labors convert to soldiers, some world building thoughts to consider are their skill level, types of weaponry to which they have access/training, and how significant is it to get them home. For example, it would be pointless to win a war while your harvest rotted in the fields, starving everyone during the winter.

Of course if your country/home/family is threatened, some of those considerations go by the wayside, but only for so long. If your homeland has no choice but to defend, it might have to keep an army it can’t afford, putting pressure on the economy.

History is filled with mercenary companies. The White Company (multi-national, but fighting mostly in Italy), The Catalan Grand Company (Spanish), and The Varangian Guard (Norse) are three famous examples. If your nation can’t afford a standing army but needs a better trained force than you can get by rounding up the peasants, mercenaries could provide a reasonably priced alternative. There’s always a war somewhere, so a company of mercenaries need never be out of work, and they could bring a level of skill and training to an employer for the right price.

Not all mercenaries follow the same ethical code, and a contract is only a contract if both sides continue to abide by it. As a writer, the use of mercenaries can add some nice twists to your plot as they change sides at a pivotal moment, or perhaps just delay their attack by a few minutes to reduce their losses. When war is a business, expect the leaders to make business decisions, and those decisions might not align with any particular nation. There are many examples of mercenary companies in fantasy, but my personal favorite is Elizabeth Moon’s Paksenarrion trilogy.

Once you decide what type of army you have, you need some soldiers. Where do your fighters come from? As a rule, soldiers reflect your society.

If you have a warrior society, or even a nomadic culture where some sort of armed conflict pervades everyday life, you probably already have the basis for your army. The Cossacks, with their people and territories organized into regimental and company districts and their militarized government, provide a historical example of a warrior nation. Even when a society isn’t strictly militarized, certain types of cultural norms lead to an easy transition. The nomadic tribes of Mongol horsemen spent centuries fighting among themselves before being united and turned toward a wider expanse in the 12th and 13th centuries.

If you don’t have trained warriors, soldiers come from whatever civilian life they lead as called. If you have a culture of hunters, they might fight with bows. A region with an economy based on logging might produce soldiers who fight with axes. If you don’t have a significant standing army, peasants show up with the tools of their trade—or modifications of those tools—and turn them to war. One thing to consider when planning to run your war with conscripts is what makes them fight. There is more to an army than training, and especially in a time of edged-weapon combat the will to close with and destroy the enemy—the fighting spirit of a force—could be as important as skill with a weapon. This is often why leaders stood behind their formations, ready to ‘encourage’ anyone who thought it might be safer to go backward instead of forward.

If you don’t have a built in warrior class but you need more combat power than you can get from untrained levies, in some cases you can combine cultures to create unique soldiers. A great example of this is the rise of the English Longbow in the 13th and 14th centuries. In 1252 the ‘Assize of Arms’ ordered all Englishmen between 15 and 60, by law, to have bow and arrows. Edward III took it farther in 1363 with the Archery Law, which basically outlawed all sports except archery and mandated practice for all men on Sunday and holidays. The expertise of the British with the longbow directly led to major victories against the French at Crecy, Poitiers, and Agincourt during the Hundred Years’ War. You can see this echoed in modern fantasy by Robert Jordan, and his use of the ‘Two Rivers’ Bow’ in the Wheel of Time series.

As you consider your soldiers, think about whether a certain region or nation might produce a certain type of fighter with advanced skills. If the skill requires specific training, the society needs to allocate assets to that end.

There are hundreds of ways you can put your army together, combining different elements and even bringing cultures together that complement one another. Archers from one region could support spearmen from another, with neither region nearly as effective on their own. However you build it, it’s important to take into consideration the economic and societal factors that go into producing a fighting force.