Today I have a chance to host my agency-sister Carrie Patel on the blog. Two things you should know about her: (1) She has the coolest job ever, and (2) her book THE BURIED LIFE just came out from Angry Robot Books. She graciously agreed to answer some of my burning questions, interview-style. Read on!

Dan: How did you come to write this book?

Carrie: Slowly and in many iterations! Writing (and, more importantly, revising) The Buried Life was in part a labor of love and in part a lesson in how to write long form fiction. I started with a somewhat impressionistic idea of the characters, their world, and their story and then spent many revisions bringing it all into focus.

Dan: What kind of research did you do for it?

Carrie: Since it takes place in an imaginary setting, I had the liberty of making most of it up. But a little bit of research into concrete details can go a long way, so I spent time looking into some of the material details of the Victorian world, since that’s the nearest analog for the technology and aesthetic of Recoletta. I also spent some time looking up different underground environments, which were full of stunning and diverse imagery.

Dan: You have a pretty cool job (with Obsidian Entertainment) that also involves writing. Does it help you with your own fiction?

Carrie: It keeps me writing throughout the day, which is great. For me, toggling between two different but exciting projects–my own fiction and dialogue writing for Pillars of Eternity–keeps me fresh in both. Writing for games is also training me to turn in good work without obsessing endlessly over it. Regular deadlines are great for encouraging productivity!

Dan: All right, related question. How much of yourself did you put into Inspector Malone?

Carrie: Not too much, I hope! We’re both stubborn and goal-oriented, but I don’t set out to write myself into my stories. It would feel a little too personal. Besides, it’s more interesting for me to write from another character’s head space.

Dan: Angry Robot classifies your book as science fantasy. Is that what you had in mind, too? How would you define that subgenre? 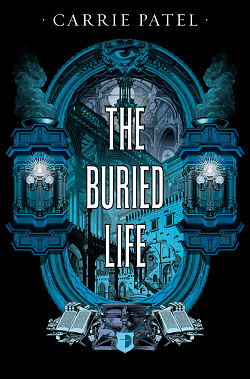 Carrie: I honestly wasn’t sure what to call it, which was why I was especially glad Angry Robot picked a subgenre. I’d previously described it as steampunk, but there aren’t really any steam-y accessories, nor is there a big focus on the technology. I’d tried the “thriller” and “mystery” labels, but the speculative elements have to be called out somehow. “Neo-Victorian” and “gaslamp” still didn’t quite fit, and it felt like I was reaching too hard for a category. I tend to think of “science fantasy” as the broad field of things that somehow fall between science fiction and fantasy, which suits The Buried Life quite nicely.

Dan: What’s new or unique about your book that we don’t see much in fantasy these days?

Carrie: Recoletta is a pretty unique setting. Underground cities appear in other speculative fiction, but when they do, it seems that people often live in them as a matter of necessity (as in Hugh Howey’s Wool) or that the inhabitants themselves are portrayed as alien to the protagonists. In Recoletta, life underground is a choice, and society has adapted in recognizable ways to accommodate it.

Dan: You have two books planned for Inspector Malone. Do you think someday there might be more? If not, what’s your next project?

Carrie: I’d like to finish Inspector Malone’s story in three books and move on to other characters and worlds. I enjoy reading a variety of different stories in genre, and I’d feel like I was missing out on something if I didn’t try new things in my writing, too. My next project will likely be a near-future science fiction novel about corporate Mars colonization and bare branches youths from India and China. I’d started on it before The Buried Life sold, and I’ve kept the idea generator for that story running in the background since then.

If you’ve read this far, you should read Carrie’s Electronic Ink Blog and follower her on Twitter. And keep an eye out for her second book from Angry Robot, CITIES AND THRONES, due out in 2015!

To enjoy some of her writing right now, head over to Beneath Ceaseless Skies and check out her fantastic short story, Here Be Monsters.