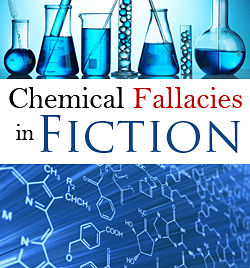 This week, we get two experts for the price of one: a husband and wife who are both chemists! They’re here to give us a little dialogue about acids, gases, and asphyxiation.

Jordan: Jordan has a BS in chemistry and has worked with adhesives and polymer science for the last ten years. His specialties include “green” chemistry, which involves coming up with more environmentally friendly alternatives to existing chemistry or formulations. Jordan is made up of chemicals and likes thinking about them.

Gwen: Gwen has a BA in chemistry (it’s complicated): She did conservation research in a museum, helping museums develop better ways to preserve art and prevent fading and damage, before quitting to become a full-time writer. She has an opinionated blog and you can also yell at her on Twitter.

Gwen: Before anyone asks, yes, we did meet in college, but no, we did not fall in love during a lab course together. You may put all your jokes about us having chemistry to rest.

Jordan: We’re well aware that if we tried to list all the inaccuracies in fiction, it would be an infinitely long post, but we wanted to talk about a couple of chemistry topics that authors often get wrong.

The Truth About Acids

Gwen: First up: Acids! In fiction, acid is pretty much the universal solvent. You can put any amount of any substance in any acid and it will dissolve in seconds. Real acids aren’t quite as dramatic.

Jordan: They come in many forms, but they’re usually clear, often pungent, and not bubbly unless they’re actively dissolving something.

Gwen: Not all acids will dissolve all substances. They range from vinegar, which is essentially harmless, to strong acids that must be handled with great caution. But most acids readily dissolve metals like iron and aluminum and do not dissolve plastic or glass.

Jordan: Most acids would take days to dissolve a large chunk of material and they have a limited amount of material they can dissolve before the acid gets neutralized.

Gwen: So if you got caught in a boat in a lake of acid, like they do in Dante’s Peak, you would probably get to the shore just fine.

Jordan: But that doesn’t mean real acids aren’t exciting! In real life, acid corrosion can lead to explosions, clouds of toxic gas, and your bones dissolving inside your skin.

Gwen: That last one is hydrofluoric acid. It’s one of the few acids that dissolves glass. Before plastics were invented, the only safe way to store it was in a wax bottle.

Jordan: You may remember hydrofluoric acid from Breaking Bad. It was knowingly misused on the show because the creators didn’t want to teach people how to actually dissolve a human body. The most accurate part was that it could dissolve a bathtub. 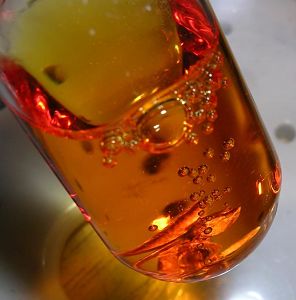 Gwen: Here’s another cool acid. It’s called aqua regia, which is Latin for “water of kings.” It’s a mixture of nitric acid (HNO¬3) and hydrochloric acid (HCl) and it is the only acid that can dissolve gold. It dissolves platinum, too.

Jordan: When Nazis were seizing all the gold in Europe, Hungarian chemist George de Hevesy dissolved two other scientists’ Nobel prizes in aqua regia and kept the solution in a jar in plain sight. The Nazis never found it. After the war, he precipitated out the gold and the Nobel Foundation recast the medals.

Gwen: Do you see that vapor coming off the acid? We call that a fuming acid.

Jordan: With certain concentrated acids, the right kind of acid can vaporize and then condense on the mucous membranes of your eyes, nose, and lungs without you ever directly coming in contact with the solution.

Gwen: The most likely way that acid could kill you is through inhalation. The other major danger is eye damage: As you know, even lemon juice can severely irritate your eyes, and stronger acids can cause blindness. The danger of chemical burns to the skin is much more minor. They sure hurt, but you probably won’t lose a limb that way.

Jordan: Also, all acids contain hydrogen. As they dissolve things, the hydrogen is released. In a confined space, it can build up and cause explosions.

Gwen: And while we’re on the topic, let’s talk about gases.

Jordan: In a lot of media, gases are also misrepresented, whether it’s the effects of a vacuum or the effects gases can have on people.

Gwen: For starters, nearly all gases are transparent, with the exception of nitrogen dioxide, that nasty brown gas that you may know as smog.

Jordan: Authors often under- and overplay the effect of oxygen on their characters. Too much oxygen can give people a slight high, but even slightly lowered levels of oxygen can cause altitude sickness, which includes nausea and disorientation.

Gwen: So in a science-fiction movie, when the oxygen levels on a spaceship start dropping, the crew isn’t going to be just fine as long as they keep it from dropping to 0%.

Jordan: Obviously, if there’s no oxygen in a room, you’ll die of asphyxiation. But the interesting thing is that, depending on the gas, you can die different ways.

Gwen: One way is oxygen replacement, when another gas displaces all the oxygen in a room. Even a harmless gas such as nitrogen can become dangerous in this situation. If you die this way, your lips and nail beds will turn blue because the hemoglobin in your blood, which turns red when it bonds with something, doesn’t have any oxygen to bond with.

Jordan: Another way is more insidious. Carbon monoxide (CO) is a molecule the same shape as oxygen (O2) and it tricks hemoglobin into bonding with it instead, and then you suffocate even if there is oxygen around.

Gwen: Cyanide (CN) kills you the same way. Since hemoglobin bonds very tightly with carbon monoxide and cyanide, if you’re killed by one of these gases, your lips and nail beds will turn bright cherry red.

Jordan: Carbon monoxide is released when you burn things, which is why you should never run a car in a closed garage.

Gwen: One thing that really is as dramatic as it is in fiction is exploding hydrogen. But the wonderful world of explosions is another topic for another day.