The Science in Sci-fi, Fact in Fantasy series will return next week. Instead, today I want to talk about how corporate greed harms authors. It seems like every week there’s a new story about a (tech) corporation changing its business practices in a way that, basically, increases their profits to the detriment of their users. Two obvious examples from the past couple of weeks are Goodreads (Amazon) and Patreon, which I’ll discuss below. But these are just two data points in a trend that has been happening over the past several years.

My generation of authors — be they indie, small-press, or traditionally published — has embraced the digital age. We’ve never had so many tools at our disposal. Yet the same corporations that empower us to write, publish, and reach new audiences hold incredible financial power over us. We have seen time and time again how the story ends. It starts something like this.

A new digital platform appears on the horizon. Maybe it’s a social media network, or a promotional channel, or an all-inclusive publishing service. It catches our attention, because it’s innovative things. Disruptive things. We’re drawn to it, like a moth to a flame, lured in by the catchy name, the sleek interface, and the buzzword-filled promises.

We, as authors, are eager seekers of opportunity. We’re the beta testers and early adopters of many technology platforms. We give it a try, and we’re simply dazzled by the results. So we blog about them, and tell our friends. Design courses and write how-to guides. Basically, we fall in love.

And then it always seems to take us by surprise when the corporations behind those platforms decide to cash in.

Let’s talk about Goodreads. Five years ago, this platform seemed so promising. As Amazon’s influence over publishing grew, and B&N seemed to react with the speed/agility of an overweight hippo, Goodreads started looking better and better. It caught the social media wave and was gaining momentum. Here was a network that might have enough influence to substantially influence readers’ book-buying decisions outside of the Amazon ecosystem.

And then Amazon bought Goodreads.

What happened after that is all too common in the world of tech acquisitions. Passive Guy has a great explanation of it related to Macmillan’s shutdown of Pronoun on The Passive Voice. It’s glaringly obvious to me that Amazon simply wanted Goodreads out of the way. Here are some indicators that Amazon is letting Goodreads die:

I pulled the number of fiction voters for the awards from 2010-2017 and made this plot: 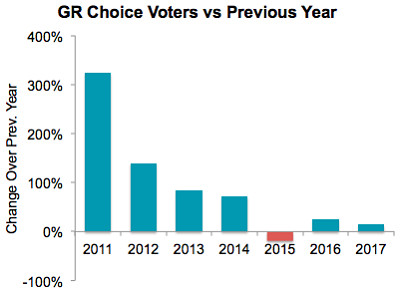 Look at the growth post-Amazon acquisition. Before 2012, it was doubling or tripling every year. But then that growth slowed, and in 2015 they actually lost voters. This is not the growth velocity of a platform that’s doing well. There’s other evidence of stagnation, too. Look at the dried-up forum participation, and the number of inactive users. Most of the active users are outside the US.

When my first book was published in 2016, Goodreads had two redeeming features. First, it hosts book reviews, and I have more there than anywhere other than Amazon. You can leave a review for a book that’s not even published, which is hugely advantageous for pre-publication marketing.

The second redeeming feature was Goodreads’ giveaway system. Basically, authors and publishers can set up giveaways for physical copies of a book. You specify the giveaway duration (1 week minimum), start date (1 week in advance minimum), regions, and number of copies. When it’s running, people who enter your giveaway can also click to add it to their to-read list.

That’s the main return you get from a giveaway: people shelving your book on GR. Entries and adds tend to spike at the start and stop of the giveaway, as illustrated here: 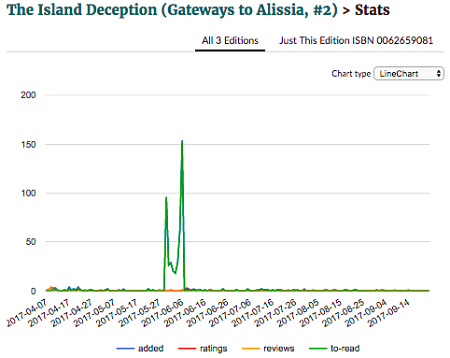 Although running a giveaway is free, the author (or publisher) bears the cost and responsibility of buying and shipping the books. GR picks the winners and gives you their address. The cost can add up quickly, especially if you allow international entrants, which GR strongly encourages. When I’ve done so, I always have to ship 1-2 books overseas. Always. I think that speaks to the fact that many of GR users are outside the US.

As anyone who ships internationally knows, it’s very expensive. In this giveaway, I think I gave away three paperbacks ($21), one to the US ($3 shipping), one to Canada ($6), and one overseas ($14). So it cost me $44 to give away three books. At best, my net return was three reviews and a couple hundred adds, whose conversion rate to actual sales is unknown.

I suppose I could have limited the giveaway to US-only (far fewer entries) and had them sent directly to the winners from a retailer that offers free shipping. That would have cut my costs approximately in half. I’d lose the personal touch, though. There’s also a much higher risk that the book recipients would not be able to leave a review, because the retailer thinks that they “know” me personally.

Oh, and you can’t give away e-books via this mechanism. Because of course that would be too efficient.

Most of us can agree that the GR giveaway system, while flawed, was one of the better ones out there. So we as a community were largely flabbergasted when Goodreads announced some major changes to their giveaway program effective in January:

As discussed on episode 192 of the Sell More Books Show, the price points here are well beyond the marketing budget for most authors. Especially since they are paying for the books. It’s also limited to the U.S.-based readership, and for e-books, to those who read on a Kindle. Some will undoubtedly try it, but for reasons I’ve outlined above, I doubt you’ll get your money’s worth. Because Amazon has not invested in the platform, Goodreads is the MySpace of book reviews. In other words, dying.

I think it’s a clear sign that Goodreads management is under pressure to turn a profit or else. And if you think about it, this was their only move. Advertising had failed, they can’t collect affiliate marketing revenue because they’re owned by Amazon, and they aren’t providing many other services they could charge for.

The fundamental problem here is that there’s no proven correlation between Goodreads adds and book sales. People who go for free stuff do not necessarily buy it if they don’t in. In fact, I’d bet they are more likely to simply go for a different free thing.

If I’m right, then the people who fork over the money to try this will only do it once. When it yields no return, they won’t try it again. I hope I’m wrong, but I predict Goodreads will be shuttered within a year.

Patreon — a crowdfunding platform for artists — offers an even more recent example of corporate greed that harms authors. This week, Patreon announced changes to their fee structure that have many patron-supported creators up in arms. It boils down to this:

The big loser in this scenario is the patron, who now must pay $1.38 to support a patron with $1 per month. It will obviously encourage patrons to give more money to fewer creators, rather than supporting many with a small amount. So many creators — especially those who have a lot of small-dollar supporters — will also be the losers.

The big winner with this change is Patreon. On a $1 pledge, they go from collecting 5-20 cents to 43 cents. They’re also doing some stuff with the payment processing date that will undoubtedly cut their payment processing fees. See this analysis by author Natalie Luhrs for some compelling numbers.

A money grab is a money grab, no matter how a corporation tries to spin it. And you’ll notice that there’s a consistent loser in these examples: authors. We are the ones who help new platforms find success in the community. We’re also usually the ones to suffer when the platform’s owner makes a not-too-subtle attempt at a money grab.

Authors very little power when we get the shaft from a tech startup or a major corporation. But we have some power: we can raise the outcry, which sometimes causes the company to change its tune. Or we can take our business elsewhere. That, even more than publicity, is the way that we can most effectively signal unhappiness to our partners in the business world.

So go forth, friends. Write, publish, and resist.