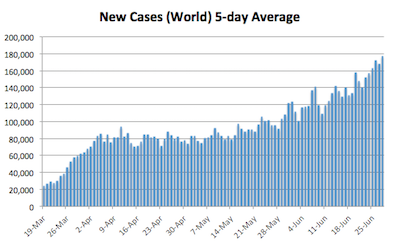 The following is an essay on the COVID-19 pandemic, with a particular emphasis on the American response. I’ll avoid discussions of politics as much a possible and focus on the science, but let’s be honest: the pandemic and its influence on health and the economy has become a political touchpoint.

I have been tracking COVID-19 numbers since mid-March, when I began working from home shortly after the pandemic reached American shores. On Sunday, there were two grim milestones: 10 million cases and 500,000 deaths worldwide. With numbers these large, it becomes a statistical fact that the mortality rate is at least 1%, making the novel coronavirus ten times deadlier than the flu. More than 150,000 deaths have been reported in the US alone, which would put COVID-19 at #5 in the most common causes of death in the United States (2017 data) behind heart disease, cancer, accidents, and chronic lower respiratory problems. In six months, it has already caused three times as many deaths as typical influenza and more than the annual toll of Alzheimer’s (#5 cause of death) and diabetes (#7).

People seem to have accepted — grudgingly, some of them — that SARS-COV-2 is an extraordinary pathogen. 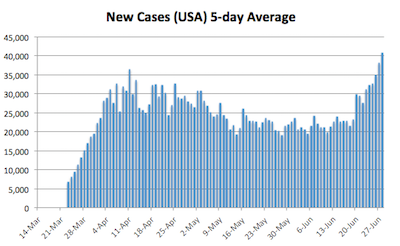 Another statistical fact about the COVID-19 pandemic is that it’s rapidly spreading. This is evident at the state, national, and international levels (see the charts at right). In the United States, we have more infections per 1,000 people than any other country except Brazil. It is both humbling and disconcerting that a nation which considers itself a global leader in many arenas (especially science and medicine) is doing such a poor job of containing the outbreak.

Coronavirus in America, Phase 1: The Fear

The first confirmed case of COVID-19 in the US was reported on January 20th. Our first cases were imported ones, of course, but by the end of January the American CDC warned that this was a pandemic and its spread in the US was inevitable. International travel restrictions were put in place, but it was far too little and too late. Thousands of international travelers who’d been exposed had returned home, many of them without any screening or isolation.

In February, the virus ravaged places outside of Asia, notably northern Italy, showcasing its astonishing ability to spread quickly and overwhelm healthcare systems. When that happened, thousands died. COVID-19, by then the official name, was a frightening beast. And it was here, despite numerous last-ditch efforts to prevent that from happening. It had gained a foothold in Washington and was spreading to other states.

We were right to be afraid.

Coronovirus in America, Phase 2: The Lockdown 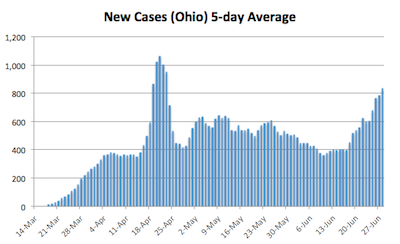 My home state of Ohio reported its first confirmed case on March 9th. By March 14th, when I began tracking the numbers, Ohio had 26 cases. Our governor (Mike DeWine) was holding daily press conferences, a significant portion of which were given to our medical director, Dr. Amy Acton. DeWine and Acton delivered almost daily press conferences in the month of March. They were always informative, fact-based, and free of political shenanigans (a sharp contrast to, say, national press conferences). Governor DeWine was the first state governor to order schools closed. A number of other states followed suit within days.

Our world changed in the face of a deadly threat that we knew very little about. We looked at places that were hard-hit by COVID-19 and the incredible toll it exacted when healthcare systems were overwhelmed. We saw it not just in distant places like Wuhan and northern Italy, but in New York City. A seemingly vast majority of citizens recognized the need to “flatten the curve” by instituting closures and stay-at-home orders.

The good news was that the lockdown was effective. It did flatten the curve. The slowed trajectory of infections gave healthcare systems time to increase their capacity and build their stores of personal protective equipment (PPE). It also gave time for testing to improve  in speed and accessibility. It was hard, of course. People scrambled to get supplies — such as toilet paper — but for much of the country, mid-March wasn’t the worst time to have to stay at home. Not everyone could, of course. Essential workers risked their lives every day during the pandemic. When the shutdowns were first instituted, many officials went on record stating that they would remain in effect until infection rates were trending consistently downward. Most would later renege on this promise.

Coronovirus in America, Phase 3: The Denial

As the lockdown wore on and the devastating economic impact took hold, national conversations changed from flattening the curve to when can we reopen? It seems that after a month or two of social distancing, Americans are impatient to return to normal as soon as possible. Lost in the discussion somewhere is the fact that the novel coronavirus did not go away. In April, there were 29,525 new cases in the US per day. In May, it was 23,307. In other words, we flattened the curve but it remains a very solid plateau.

I think this is an important distinction: even with essentially a nationwide lockdown, we still saw steady virus transmission. Yet, only a few weeks after the shutdown, the first planned reopenings went into effect. Restaurants, stores, bars, and other public venues were permitted to reopen with certain restrictions. Some of them opened but did not follow restrictions, as various social media posts have testified. Yet the fact that things were allowed to reopen to any extent, combined with uninformed rhetoric at some levels of government, gave people the impression that everything’s OK now; we can go back to normal.

The virus is still spreading, but everywhere I look, I see people living in denial. This past weekend, two different homes in my neighborhood hosted gatherings of at least 30 people. Little league baseball and travel soccer teams have been practicing for weeks. Friends are posting pictures from their beach vacations in the Carolinas. People are talking about COVID-19 like it was in the past, when it’s very much in our present and future.

There is a simple, effective, low-cost method that is scientifically proven to reducing the spread of novel coronavirus when people are in close proximity: wearing a mask or face covering. In medical settings, everyone is expected to wear a mask and there’s no debate. However, as reopenings are planned and executed in the United States, the idea of a mask requirement is, for some reason, a huge issue. Several political leaders tried to make face coverings a requirement for various reopenings but backed down in the face of some vocal resistance.

Somehow the wearing a mask / not wearing a mask thing has been conflated with political party support. I find this incredibly moronic. Wearing a mask is a basic method to prevent the spread of airborne germs. Not just from other people to you, but from you to other people. To refuse to wear one — outside of people who have legitimate medical reasons that prevent it — is selfish. Period. It says that you don’t care about people getting sick and dying.

Allow me to respond to three of the common excuses people offer for not wanting to wear masks:

The last point touches on the fundamental problem with the American response to the pandemic: we don’t like being told what to do. Especially by the government and by medical professionals. Personal liberty or death! It’s in the constitution! I get that. At the same time, I stand by my point that we wouldn’t have order people to act a certain way if they did on their own.

In America, people have a lot of choices. Maybe more than most. The only catch is that you have to live with your decisions. People clamored to reopen the economy as soon as possible. State governments caved to those demands. People demand the right to go out in public without proper precautions. Now, we have to face the consequences of those choices. Namely, the surge in new infections will force a new round of shutdowns. Sorry, but that’s what is coming because certain people couldn’t be bothered to wear a mask or stay home.

A vaccine for COVID-19 is still a long way off. The choices we make now have consequences, good or bad, that are measured in human lives. How we act during the worldwide pandemic will be our personal legacy for the rest of our lives. It’s a fair question to ask in future job interviews. It’s a likely question our children and grandchildren will ask us, too. For my part, I plan to be able to answer, honestly, that I did the right thing.