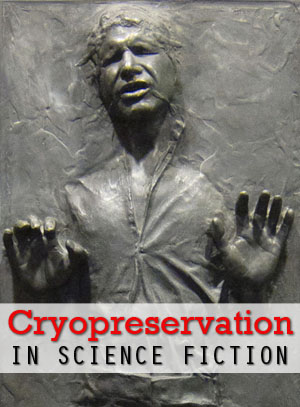 Terry Newman is a writer for film, TV, stage, radio and print. His comic fantasy Detective Strongoak and the Case of the Dead Elf is published by Harper Collins and features the dwarf Master Detective Nicely Strongoak.

In a previous life he was a research biologist investigating changes in cell structure during activity, primarily using low temperature techniques. Nobody called him Capt. Cold, no matter how hard he tried to make them. You should follow him on Twitter.

Cryopreservation Gives me the Chills!

The thing to remember about cryopreservation is that it’s a tricky business. Plus, you have to be very careful about extrapolating from one example – say the freezing of bull semen (no sniggering, please)- to a rather more complicated situation i.e. people freezing. A random survey of people when stopped in the street* and asked what their idea of ‘cryopreservation’ was muttered: ‘That’s all about freezing Walt Disney’s head isn’t it?’ The answer to which is: No, it isn’t.

Cryopreservation, as performed by biologists, is actually carried out for two different ends. The first objective is to maintain the structure of biological tissue as close as possible to the functional biological state for subsequent analysis. If you can do this you might then be able to image the biological in as natural state as possible, at a particular time – even capturing cellular events, such as secretion, as they occur, and potentially capturing the biochemical constituents of cells and tissues in their appropriate compartments.

The second objective is to permit freezing, and eventual recovery to a fully functional state, of the biological material. This potentially allows long term storage, usually at low temperature, ‘suspended animation’ and such like. It doesn’t matter if the material, while it is being stored, is in a natural state or not. A seed, after all, is biological tissue in a form of suspended animation and they can do remarkable well without going anywhere near a fridge.

These two different approaches to cryopreservation do not go hand in hand. For microscopical, and other analytical studies the cryopreserved biological material should be frozen as quickly as possible, otherwise the fine structure of the cells and tissues will be disrupted by the physical and chemical effects of ice crystal growth. These are not good; in fact they kill cells. Cryopreserving for future viability is all about controlling the freezing of cellular water to prevent damage and that does not require very fast freezing, but controlled freezing.

The Truth About Liquid Nitrogen

Let’s clear up one thing straight away, despite what many novels and ‘Terminator 2’ would have you believe, liquid nitrogen is not a great freezing agent. Yes, it is quite cold (−195.79 °C), what we scientists call a bit nippy, but it has quite a small range between its melting and boiling points. This means that if you put something warm into your liquid nitrogen (sitting happily in a handy vacuum flask) the heat with initially cause the liquid nitrogen to boil. This will form an insulating layer of nitrogen vapour around the object you are trying to cool, which prevents further rapid heat loss.

This is why you can actually very briefly dip your hand in liquid nitrogen (DO NOT TRY THIS!).

This is called the Leidenfrost effect. You can see the same thing happen when you put drops of water into a very hot pan. However, you can get very nasty burns if your clothes get cooled by the liquid nitrogen and then come into contact with your skin. No insulating gas layer possible then. If you ever have to visit the doctor to get a skin lesion frozen off they will use quite a high-pressure jet of liquid nitrogen on you. Here the jet effectively strips away the insulating layer of gas to expose the skin to more very cold liquid. Alternatively you can cool a metal rod in nitrogen and press that against the skin. 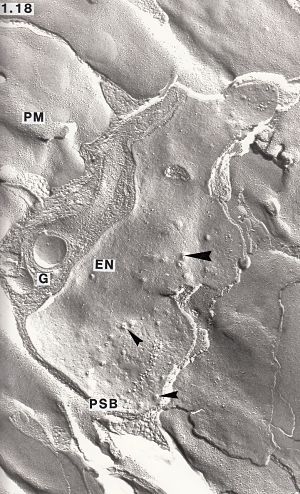 An electrically stimulated locust neuromuscular junction frozen milliseconds later using ultra-rapid freezing with a liquid helium-cooled copper block. The sample was then prepared for electron microscopy by freeze-fracture replication which produces a platinum shadowed replica of the fractured tissue surface, with white shadows. Membranes can fracture down the centre of the bilayer producing an external (E) face and a protoplasmic (P) face. Each of the small particles represents a single membrane protein and is approximately 10 nm in size. The large proteins of the pre-synaptic bar (PSB) are thought to be calcium channels. The arrows indicate the position of synaptic vesicles, fused by the freezing process.
EN – External face of the nerve membrane. PM – Protoplasmic face of the muscle membrane. Micrograph prepared by the author.

One of the faster ways of freezing biological material for ultrastructural analysis is to ‘slam’ it against a liquid helium-cooled ultra-pure copper block. This produces ‘ultra-rapid’ freezing. I used to do this a lot; it’s really cool. Sorry, I just had to get that pun out of the way. The electron micrograph shown is of a neuromuscular junction of a locust that was frozen milliseconds after being electrically stimulated. Small membrane-bound vesicles have been captured as they fuse with the nerve membrane. Each of the small particles on the smooth areas is a membrane protein some 14 nanometers in size. A nanometer is 10-9 meter, or one billionth of a meter. If that doesn’t boggle you just consider a nanometer is to a tennis ball what the tennis ball is to the earth. That’s small.

The Need for Fast Freezing

The objective when freezing for ultrastructural studies is to freeze the tissues so very fast that large ice crystals cannot form to disrupt this delicate nanostructure. The cell water is said to become vitrified – glasslike, you effectively get a snapshot of the tissue and can capture transient events, like membrane fusion shown. However, even with the very fast freezing rates that are produced by slamming you only get this ‘glass like’ appearance in a very superficial layer below the contact area (< 10 micron). This is all because of physics. You simply can’t get the heat out of biological material any faster. And this is the problem with freezing tissue for viability, there is nowhere for the ice crystals to grow where they can’t do damage.

The results of the largely disappointing freezing rates available to us is that you get large ice-crystals forming in tissue and they disrupt the structure, bursting membranes and organelles and that will eventually kill cells and tissues – catastrophic for organs! You don’t come back easily from that state when you are put onto defrost. There is another very important effect as well. As water freezes to form pure ice crystals so salts within the cells become concentrated causing damage thanks to chemical and osmotic effects. If the ice crystals form outside the cells, in the extracellular space, then water being drawn out of the cells will cause chemical and osmotic damage within the cells themselves. Slower freezing rates can cause water to freeze outside cells, with the cells themselves dehydrated, and damaged, by the growing internal salt concentration.

Cryopreservation is therefore a different matter when you are considering freezing for subsequent recovery. That’s all about controlling the freezing rate and the amount and state of the water in the cell.

Time for a reminder of some basic biology. The cell is the basic structural and functional unit of all living things. A tissue is an ensemble of similar cells, usually from the same origin, which work together to carry out a specific function. Multiple tissues, working together, form organs. A lot of the work done on cryopreservation for viability has been carried out on isolated cells, like the aforementioned semen and blood components such as red blood cells. Cells are small and therefore heat can be extracted from them relatively speedily and it is also relatively easy to extract water from, and infiltrate other substances, into a cell. Essentially this means that isolated cells are ideal for the application of cryoprotectants. These are substances used to protect biological tissue from freezing damage and really the discussion about suspended animation, and such like, is a discussion about the efficacy of cryoprotectants.

Cryoprotectants come in two main classes, penetrating and non penetrating. Penetrating cryoprotectants are small molecules that dissolve in water and can easily cross cell membranes and affect the melting point of water. These cryoprotectants must not in themselves be toxic of course, but you need to remember that their actions and toxicity at room temperature will be different than that as they approach freezing. They should also not precipitate or form eutectics or hydrates. By entering the cell they will help prevent excessive dehydration of cells; some actually function by forming hydrogen bonds with biological molecules. Sugars such as trehalose and glucose can act as penetrating cryoprotectants.

Another class of helpful compounds is sometimes referred to as ‘ice blockers’ and they can complement, by additions in small amounts, the cryoprotective actions of conventional cryoprotectives.

As is generally known, cryoprotectants do occur naturally. Antarctic fish have evolved cryoprotectant glycoproteins, insects use sugars or plyols, while arctic frogs use glucose, but arctic salamanders can produce glycerol in their livers. Microscopic multicellular water-bears (Tardigrada), can survive freezing by replacing most of their internal water with the sugar trehalose.

Cocktails of cryoprotectants have been developed to assist in freezing biological materials and it’s estimated that we are now on a 6th generation with regard to their success and ability to produce a form of vitrification. Vascular tissue, heart valves, cornea and cartilage have all been successfully frozen. Progress has also been made on ovary and kidney tissue.

However, when red blood cells are infiltrated with trehalose maximal survival rates are only in the 90% range, with functionality reduced to 60%. You can get increased functionality but with a reduction of survival. And remember 90% is in pretty perfect conditions, cells in solutions, not where you need to perfuse a cryoprotectant through a dead body. Whole body perfusions can be tricky at the best of times – like when the patient is actually alive with a beating heart.

I for one would not want to lose approximately 10 billion neurons from my brain. Call me old-fashioned, but I don’t really fancy coming back in 200 years time as something akin, at best, to a zombie.

* actually a friend while walking to the pub.