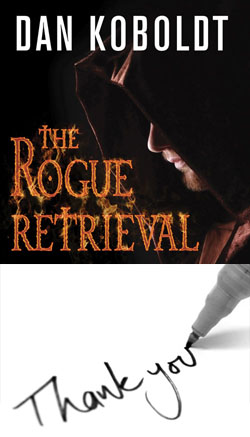 It’s the day before the release of The Rogue Retrieval, and I couldn’t be more excited. There was a time when I wasn’t sure this day would come for me. I’m not one of those people who started writing at age twelve. I was well into adulthood, well aware of the odds, and stubborn enough to do it anyway.

If I’ve reached any measure of success, it’s not because of me. It’s because of the countless people who believed in me, taught me, and helped me along the way.

This day is for all of you.

I started writing fiction eight years ago, almost to the day. I knew it would be tough, but I came in confident. I’d done quite a bit of nonfiction writing, and I’d read a metric ton of books. Just ask anyone who’s helped me move.

When I took my first fiction writing class at WashU, I felt more excited than worried. We had to write two short stories to workshop in class. My first was a second-world fantasy about a noble whose orchards are about to be overrun by a broken army, told from the point of view of his servant. I thought it was a decent yarn.

I was wrong. It was terrible.

To their credit, the other students and the teacher (Bob Earleywine) broke it to me gently. The writing was stiff and distant. The story didn’t make them feel anything. In the years that followed, I worked to do better. After the second course with Bob, some of the students and I kept in touch. Kate, Eric, Kathleen, Mark, Paul… you guys have been with me since the beginning. I learned so many fundamental things from workshopping with you.

Fun fact: You know that fantasy story I wrote that was so bad? After five revisions and 51 rejections, I sold it to Stupefying Stories magazine. On my birthday, no less! It’ll be out later this year. That’s what I do: I bring the stubbornness.

I’m grateful to National Novel Writing Month (NaNoWriMo), without which I might never have taken the plunge into writing novels. I wrote my first in 2009, then two more (in a different world) in 2010 and 2011. Very few people got to read these, because I knew I wasn’t ready.

Life intervened, too. Things got busy at work. My wife and I had a daughter. Then we had twin boys! Writing wasn’t just in the backseat; it was in the deep cargo trunk of the minivan.

In 2012, I read an article about Teller, of the famous magic act Penn & Teller, who was trying to get patent protection for his illusions. That was the seed of the story I started writing in NaNoWriMo 2012, the novel that would become The Rogue Retrieval.

I finished the manuscript in late 2013 and thought I had something that was good enough to get published. Thanks to the verbose, informative ramblings of Anne Mini, I had some idea about how the query process worked. I fired off the first round of queries and sat back to wait.

If I’d only known.

While I waited, I entered a couple of these pitching contests that I’d been hearing about. I tried #PitMad, a Twitter pitching contest. I submitted to Brenda Drake’s PitchMadness, and Michelle Hauck’s Sun Versus Snow. I didn’t get in to either of these, but they were the best thing to ever happen to me.

In the meantime, an agent reached out. She was intrigued by the query letter, and wanted to see a partial. I’ve already told the story of how I landed my literary agent, so I won’t repeat it. I made it through the trenches with a new appreciation for them.

I count myself so lucky to have ended up with Jennie Goloboy of Red Sofa Literary Agency. I know many agented authors, and from our conversations, I’ve learned to appreciate what a great communicator Jennie is.She’s been incredibly patient and supportive with me, but knows how to bring down the hammer when I need it.

There have been times (believe it or not) when I’ve been frustrated. Angry. Depressed. Jennie always finds the right thing to say that brings me back to the center.

What’s more, she brought me into the quirky Red Sofa family. Tex Thompson, Daniel Bensen, Kate Heartfield, and all of my agency-siblings are simply delightful. They’ve been my friends and confidantes for the past year and a half. I might have gone insane without having them to talk to.

Remember when I said the pitching contests were the best thing to happen to me? Once I had an agent, I got the chance to mentor for some of those contests. I met so many other authors who are at similar places in their careers. The Pitch Wars community, as I call it, is such an important part of my career as a writer. I’m so grateful to Brenda Drake for bringing us all together. And I’m grateful to the other mentors, mentees, and participants I met during the contest. You guys rock!

Through Pitch Wars and D.L. Hammons’s WRiTE CLUB, I met Dannie Morin, a talented writer and Pitch Wars mentor who became my critique partner. She eventually invited me to The Clubhouse, a kind of writing support group. I’m so lucky to have all of you!

Pitch Wars and PitMad were how I met some of my closest writing friends:

It was a great day when Jennie called to tell me about the offer from Harper Voyager. David Pomerico is a fantastic editor, and I think we’re well suited to one another. His edits were spot-on. They added emotion and humor and pace at critical points in the book.

If you see my name so often this week that you’re sick of me, you can thank my publicist, Caroline Perny. She makes stuff happen. I’m also grateful to Rebecca Lucash, the artists, the copy editors, and others at Harper Voyager who have helped bring my book to the world.

There’s another group I need to thank, and that’s my fellow Impulse authors. We’ve confided in, shared with, and supported one another. This group has been my excuse to get to know people like Michelle Hauck and Beth Cato without coming across as the fanboy that I am.

As my book launch neared and the promotional stuff got more serious, I put out a call for help. I asked people who were friends or fans to go the extra mile to spread the word about my book. The Rogue Division answered that call and have been vital to spreading the word.

I’m also grateful to my Pitch Wars mentee, Mike Mammay, and his friends / fellow mentees who’ve all come out to help. I hope to return the favor to all of them someday.

Many people have heard about my book and asked, “How do you do it? Do you never sleep?” Admittedly, I don’t sleep as much as I should. But the reason I can write while keeping a full-time job is that I have an incredibly supportive family.

My wife Chris and our three children are my most ardent supporters. Writing takes me away from them — physically and mentally — far too often, but they rarely complain. This is a big deal for the Koboldt household, and (as you might guess from the photo) we’re probably way too excited.

There’ll be a new book in the world tomorrow, with my name on the cover and HarperCollins on the spine. Thank you, all of you, for helping make one of my lifelong dreams come true.