Last month was the ninth #SFFpit Twitter pitching event for sci-fi/fantasy authors seeking literary representation, hosted by myself and Michael Mammay. The first #SFFpit took place in June 2014, so this marks four years of the event.

Having taken some time to examine the numbers and talk with Mike, I think it’s time to discuss the future of the #SFFpit contest. To inform that discussion, let’s look at some numbers.

These numbers are offered with the usual caveats: they’re based on a download of the #SFFpit feed for the hours of the event (8 a.m. to 6 p.m. on June 28th). There were more than 5,000 tweets during that period on the hashtag.

Spammers continue to be a problem. I’ve done my best to remove spammy tweets before this analysis, but would still appreciate it if people went on the #SFFpit hashtag, clicked to view “Live” tweets, and then report/block the obvious spam.

First, the good news: we had 1,021 participating authors at the ninth #SFFpit, 15.6% more than last June and a record number since the start of the contest. About two-thirds of the authors this time around had never participated in #SFFpit before, at least under their current Twitter handle. That’s a wonderful influx of new #SFFpit authors, and a figure I might use when recruiting agents/editors in the future (more on that in a minute).

The engagement and support among authors was remarkable. I didn’t bother to count, but I’m guessing that RTs and other encouragement reached record levels, too. Bravo to everyone who made an effort to support their fellow authors. 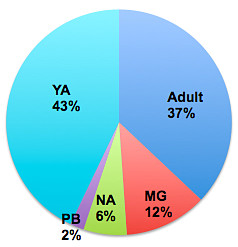 Pitches by Age Category and GEnre

Due to technical reasons that probably aren’t of interest to you, I was only able to assign about 16% of them to an age category, so the age category breakdown is essentially a sampling. Even so, the numbers are consistent with past events, so I think they’re somewhat reliable.

As usual, young adult (YA; 43%)) is the leading age category, followed by adult (37%). Note that the latter may be an under-estimate, as pitches that did not specify the #AD hashtag are not counted as adult. Middle grade (MG) remains a distant third, representing just 12% of pitches.

The distributions are very similar to #SFFpit 8, with fantasy (FA) the most popular, followed by science fiction (SF). Space opera (SO) remains a distant third. Beyond that, I encourage you not to read too much into the relative order of subgenres, since the smaller numbers are more likely to be affected by sampling. 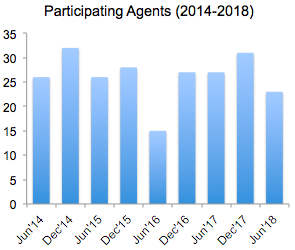 Now we come to the less-good news. Mike and I invited about 50 agents from 36 agencies to the event, less than a third of whom actually participated. Even counting the handful who showed up on their own, 23 literary agents from 19 agencies participated.

Note, this does not count a handful of agents who wandered over from #FaithPitch, which also ran June 28th, as I’m unsure of their legitimacy. Even so, it’s the second-lowest level of agent participation ever. There are likely several contributing factors such as:

Another somewhat-obvious trend apparent in the figure is that we consistently have fewer agents in June than December. June might simply be a bad month (see Idea 1 below).

What To Do About Future #SFFpit Events

The overall trend of #SFFpit participation from both sides is illustrated here: 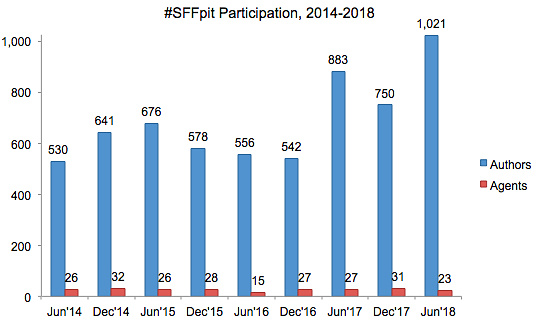 Over the past four years of #SFFpit, author participation continues to grow. This is fantastic from a community point of view. However, without more literary agents to make requests, it’s also incredibly competitive. Mike and I have discussed a few ways to help remedy the situation in the future. I’d like to hear your thoughts on these, ideally in the comments section below.

Currently, we host #SFFpit twice a year, in June and December. These months are hardly ideal, especially from the agent point of view. In June, many agents are on vacation or otherwise traveling. In December, many have family/holiday commitments.

The challenge, of course, is that there’s no perfect time to hold such an event. I feel very strongly that we should avoid January (query avalanche), August (industry conferences/vacation), and November (NaNoWriMo). March/September or April/October might work, but I’d have to check with various folks to make sure we don’t step on the toes of other writing/pitching events.

Of course, another possible strategy would be to invite more agencies and participate. Mike and I personally invite more than 50 agents each time around. Most, if not all, of the invitees have been vetted in some way by us or trusted colleagues. Thus, I’m very comfortable supporting them when they show up.

We could certainly invite more agents to participate. There are established agents we haven’t gotten around to inviting, just as there are new agents and agencies every year. It would create more work, and we’d almost certainly have to lean on some author friends for help.

At this moment, #SFFpit is primarily aimed at authors who hope to land a literary agent and pursue traditional publishing. Mike and I both are traditionally published, so we’re biased. That being said, we also recognize that there are many publishing paths that might suit authors who participate in #SFFpit, such as small/independent presses. Extending invitation to those editors would certainly expand the requesting pool.

This idea seems likely to be effective, but it also makes me nervous. Literary agents can be vetted using resources like QueryTracker and Publisher’s Marketplace. Small presses, however, are more harder to credential, especially if they’re new. We can only evaluate them using soft data, i.e. information on their websites, the experience claimed by their personnel, discussions in AbsoluteWrite forums, etc.

N.B., many small press editors already come to #SFFpit and make requests. Unfortunately, I can’t vouch for most of them. I remind authors to obsessively research any publisher before sending materials.

What Do You Think?

I’d like to hear your thoughts on the ideas above, as well as any others you might put forth to ensure the future success of the contest. Please leave a comment below (all comments are moderated, so it may take a bit before I approve yours).