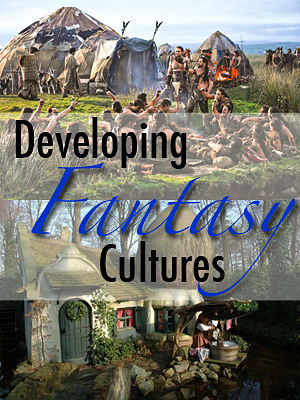 Hannah Emery is a sociologist by training (PhD from UC Berkeley last year). Her professional specialties include culture, education, and identity; she wrote her dissertation on the social construction of identity, looking at how parents choose names for their children. In addition to the general Intro to Sociology course, she’s also taught courses on identity and on family.

Why Developing “A Fantasy Culture” Won’t Cut It

Can you describe your fantasy story’s dominant culture in one sentence?

That’s where many of us start when we’re writing, especially those who really love to worldbuild. We hit on a concept for a race of catpeople, or think about how people would be different if they’d evolved underwater, or decide to tweak how human reproduction works. Concepts like these are fantastic starting places: with a little research and creativity, they can be spun pretty quickly into a full-fledged culture, with elaborate practices, values, and stories and beliefs about how the world works.

And you can stop there. A lot of authors do, including some whose books are runaway best-sellers. But if you want your story to portray a realistic society, building “the culture” won’t be enough, for three reasons: cultural drift, cultural exchange, and deviance. Let’s unpack these a little.

How old is your primary culture? And how much territory does it cover?

There’s a lot of talk both inside and outside the United States about “American culture,” You know, the culture of Big Macs and organic local farmers’ markets, of abstinence pledges and the reality show Sixteen and Pregnant, of – you get the idea. Even in “the information age,” the US still has regional cultures. If you’re familiar with those cultures, you might make assumptions about someone from the Bay Area, or the Bible Belt, or Brooklyn, but you’d likely realize there’s not much you can assume about someone from “America.” The country’s just too big.

The same goes for cultural change over time. Even in a relatively young country like the US, there have been dramatic cultural changes since its founding, and modern people get into positively brutal arguments about what the original culture was (just ask someone with an opinion on the issue what “separation of church and state” means).

Over time and distance, the Vulgar Latin spoken in the Roman Empire fragmented into the very-different Romance languages. Culture fragments, too, and it also changes in response to local conditions. The American Revolution changed its people’s culture dramatically. So did the slave trade. So did the car.

Failing to take cultural drift into account seems to be particularly common when you’re developing non-human cultures (centaurs are noble, dwarves are gruff, elves are arrogant, you know the drill). One exercise to help you get around this is to think about which of the cultural traits you’ve developed are actually rooted in biology: those are the ones most likely to be universal across cultures. For instance, almost all human children are raised in family groups; almost all humans subsist on some combination of plant matter and animal protein; almost all humans will have sexual partners at some point in their adult life. But think how many variations exist on those themes if you widen the scope to all human cultures.

Think fast: where did tomatoes originate?

If you guessed Italy, I can’t blame you. Tomato sauces and bruschetta are so strongly associated with Italian food now that it can be hard to believe there were no tomatoes in Europe until the sixteenth century. They originated in southern Mexico, and came to Europe with returning Spanish explorers. Same thing with chili peppers, brought first to Europe and then to Asia from the “New World.” People traveled, they saw new things, and they adopted those things as their own.

Intelligent creatures are curious. If people from your primary culture have contact with other cultures, whether through war, alliance, or just casual encounters, some parts of those other cultures will trickle home with them. Some American GIs who served in Vietnam came home with a new taste for Southeast Asian cuisine; some sub-Saharan Africans who heard the preaching of European missionaries decided this Jesus stuff might be worth exploring.

Food and religion are particularly good examples of cultural exchange, because they’re pretty portable and fairly resistant to extinction. When people travel to a new country, they bring their cuisine and their faith along, and even when immigrants assimilate, food and faith tend to persist longer than other things. But the longer an export is immersed in a new culture, the further it’s likely to drift from its original source material. Christianity in Africa looks quite different from Christianity in Europe; “Chinese food” in the United States is very different from Cantonese or Szechuan cuisine. Blame cultural drift again, along with syncretism (a term most commonly applied to religion): combining new cultural elements with ones that are already working well. East and Southeast Asia are notorious for this, with many people’s religious practices incorporating elements of Buddhism, Daoism, Confucianism and local indigenous traditions without the practitioners seeing any contradiction.

Cultural exchange is particularly common where two cultures bump up against each other often. This is why “ethnic” food is most prevalent in big cities that are common immigrant destinations, and why there are more Mexican restaurants in the southwestern US (i.e., close to Mexico) than in New England. If your story’s set in a border town, it will almost by definition not be monocultural.

Finally, of course, there’s cultural exchange in the most direct sense of the word. When two human cultures first meet, there are two things you can almost always count on: they’ll try to kill each other, and they’ll make babies. Even if there are taboos against intercultural sexual relations – even if it’s punishable by death – it’ll still happen. And the children who come from those unions will have to be categorized within the societies who could potentially claim them, and decide for themselves what cultural space they’re going to occupy.

Which brings me to my final bullet point. I suspect that right now, someone reading this is preparing to protest that your fantasy culture is the exception, that your cultural authorities (king, warlord, high priests, whoever) maintain a policy of strict isolationism, so there’s no opportunities for cultural exchange, and they’re immortal, so there’s limited opportunity for cultural drift because the story coming from the top never changes. To you, I say that even in the most authoritarian societies, there will always be the crazy ones.

If you took early American TV as your guide, you could easily believe the America of the ‘50s was a land of capitalism-loving, comfortably middle-class families, with stay-at-home moms and breadwinning dads. But, of course, some Americans still got divorced in the ‘50s; some were in same-sex relationships; some were poor; some were Communists. The dominant culture’s social norms may have pointed people toward the Leave it to Beaver ideal, but the reality was a little different.

Whatever norms, beliefs and values your society has, there will be people who stray from them. People who don’t believe God created the universe, or don’t believe that the Big Bang did. People who sever ties with their family of origin, or who live with their parents until they’re forty. Straying from the mainstream – whatever that mainstream might be – is what sociologists call deviance.

People tend to think of the term deviance as referring to illegal and/or immoral actions, and that’s certainly part of the picture. But there are also deviant acts that violate norms rather than laws or morals, like sitting down right next to someone on the bus when there are empty seats available elsewhere. You won’t get arrested; you may not even get a dirty look; but you’ll almost certainly make the other person uncomfortable. And there’s another type of deviance even milder than norm-breaking, people who just do things a little differently. In 2014, in much of the world, not having a cell phone makes you deviant; so does having twelve children. Ditto skydiving, or having a tarantula for a pet.

Your society will have all these forms of deviance. There will be people who commit crimes (actions that a government deems undesirable for one reason or another); there will be people who do immoral things (often actions that a religious authority deems undesirable); and there will be people who do weird things, and think outside the box. The motivations for these actions could be anything you can imagine. What if there was a Dothraki in George RR Martin’s A Song of Ice and Fire who was allergic to horses? What if there was a Hogwarts house elf who had a vision from the gods and started preaching that the house elves needed to go join Voldemort’s cause, or that they needed to use their magic destroy the humans?

The people in your world will be born into a culture, and that culture will shape their thoughts and beliefs and actions. But no thinking person can conform completely to every aspect of their culture, no matter how constrictive that culture is. You’ll always have variability, and that’s something to consider when developing fantasy cultures.

This might all sound like a lot of work, and I’m certainly not suggesting you come up with a hundred incarnations of every culture that could potentially appear in your story. But for the main cultures, I’d suggest it’s worth thinking about these things. Because the more nuance you can put in your cultures, the more realistic they’ll feel to your readers – and who knows, you may even find opportunities for new stories! The messianic house elf seems like it has potential to me.

If you liked this article, share it with your writerly friends on Twitter! Here are some ready-made tweets: