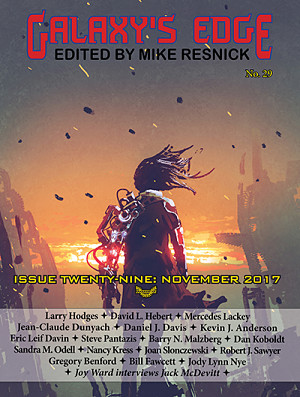 Some of my favorite story ideas come when I pair a themed anthology call with my own life experiences. For example, my first published story (“Going Viral”) was part of an anthology about world-changing events and drew on my early career working in a small academic research lab that struggled to keep its funding.

A couple of years ago, I came across a Kickstarter for an anthology with a very cool theme: disabled characters during a future apocalypse. Due to my work as a genetics researcher, I’ve come in contact with many families who struggle with chronic or lifelong disabilities, from mild learning disabilities to severe muscular dystrophies. One of my principal focus areas is the study of inherited forms of blindness, specifically dominant retinitis pigmentosa (RP).

RP is an inherited disorder that often manifests as night blindness (in late childhood or early teens) and then progresses with the gradual loss of peripheral vision. Most RP patients are legally blind by the age of 40. Mutations in dozens of different genes can cause RP, but there’s no cure.

Although it’s not fatal, the disease has a consistent, unyielding progression. It starts as an inconvenience (not seeing well in the dark) that only gets worse, culminating with life-changing consequences (i.e. losing your driver’s license). And for dominantly-inherited RP, you also live with the difficult knowledge that your children have a 50% chance of inheriting it from you.

I know because I have family members with RP. That made it a good choice for a character disability in my story, because I have real-world experience. All I needed next was an apocalypse. The obvious possibilities for that — worldwide pandemic, nuclear winter, etc. — did not hold much appeal for me. I wondered instead what type of apocalypse would be most challenging for someone with progressive blindness.

Failure of the power grid seemed like a good bet. The most dangerous setting for an RP patient, after all, is darkness.

So I wrote a story about a man with RP who’s trying to survive and protect his daughter in a world that went dark. It was shortlisted by the themed anthology, but didn’t make it in. That might have been a blessing in disguise, because I turned around and sold it to Mike Resnick at Galaxy’s Edge magazine.

You’ll find “The Coming of Darkness” alongside several fantastic stories by other SF/F authors in the November issue of Galaxy’s Edge, which came out this week. I’m really proud of this story and thrilled to see it in print. Hope you enjoy it.