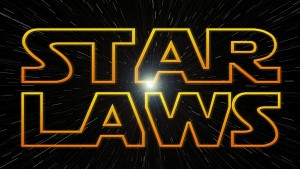 This article on legal systems in SFF is part of the Science in Sci-fi, Fact in Fantasy blog series. Each week, we tackle one of the scientific or technological concepts pervasive in sci-fi (space travel, genetic engineering, artificial intelligence, etc.) with input from an expert. Please join the mailing list to be notified every time new content is posted.

Today’s expert is J.R.H. Lawless, a Newfoundland-born lawyer who grew up, lives and practices in Saint-Pierre-and-Miquelon, a set of tiny islands belonging to France, but located off the east coast of Canada. After dual Masters degrees in Political Science and Law from the elite French public administration schools Sciences Po Bordeaux and Sciences Po Paris, he worked for years as Secretary General of a Parliamentary Group at the French National Assembly.

With Douglas Adams and Terry Pratchett in his veins, J.R.H. completed his first novel manuscript as a stay-at-home dad in rural England, when the second of his three children was an infant, and has since developed multiple novel-length and short fiction SF works, with publications in SFWA pro-rate venues. He’d love for you to get in touch with him on Twitter!

Distance and Legal Systems in Sci-fi

As Douglas Adams put it best, space is big. Really big. And that sort of chemist-trip-dwarfing immensity has consequences reaching far beyond the realm of mere commercial pharmaceuticals.

Science is the ever-refined search for the laws of the Universe. But Science Fiction is about people — and as soon as you put two people together, you get another sort of law, the kind we need to invent and respect to function as a group. Space is no different, and any solid SF world-building must necessarily include a working legal and political system, if only to serve as a never-questioned background to the plot. However, maintaining a legal framework over any sort of distance is an inherent challenge. If you think the Romans had it bad, try scaling that up to an interplanetary level, let alone an interstellar one. Asimov’s Foundation series is, among many things, a fantastic study of the enormous challenges to the legal organization of human affairs once they reach a galactic scale.

Faced with the daunting perspective of building a sensible legal framework in space — especially when our own legal systems often seem to make so little sense in the here-and-now –, it is hardly surprising that many world-builders decide to bodge it, and just get on to the good bits with the spaceships and the lasers.

The Effect of Distance

In space, distance has two major effects: limiting physical travel of people and goods, and limiting the travel of information.

In Star Trek Into Darkness, alternate-timeline Khan glares at the camera, then teleports all the way from Earth to the Klingon homeworld, some 112 light-years away. Forget about Iconian technology, or the warp drive becoming obsolete — the legal system ramifications would be enormous. The Federation is organized, as a political entity, through Starfleet. And Starfleet itself is organized through a network and hierarchy of vessels and crew — the clue is in the name. Introduce the possibility of casual teleportation across interstellar distances, and there’s no need for a Starfleet anymore; or at least, not in the function that serves as the basis to the Federation’s political existence and rule of law.

There’s no issue with instantaneous teleportation over nigh-infinite distances in itself — other than, in this case, breaking with established canon. After all, anything is and must be possible within the framework of SFF. But, as ever, good fiction is just as much about how people deal with their constraints as with their dreams, and when those fundamental constraints suddenly disappear, it is the human element which no longer makes sense.

The same is true regarding communication over stellar distances. In the Star Wars prequels, the Galactic Republic is mired in the vices and privileges of the world-city Coruscant, with representatives so disconnected from the lives of their home systems they leave them wide open to manipulation, rebellion, and the rise of the Empire. Sound familiar? And yet, when any Jedi Knight or passing noblewoman fancies a chat, they can enter into instant, two-way communication over interstellar space.

Amongst a thousand other unanswerable questions the prequels raise, one can only wonder: if instantaneous communication is possible, why do they need a physical Senate in the first place? It makes for a cool story, but surely telepresence would be a far more natural, inexpensive, efficient, and safer arrangement for the deliberation of public affairs in the galaxy far, far away, rather than sending representatives from somewhere between 1,024 and 24,372 solar systems to a single, crime-ridden, and vulnerable world. The Naboo trade disputes would have ended a whole lot faster, for one thing.

This sort of centralized government can make perfect sense, but only in a Universe where both communication and travel are severely limited. If news takes standard years, or more if relativity holds true, to travel from one end of a political entity to the other, this places the star-flung masses into a situation very similar to that of medieval Europe, with a natural tendency towards a feudal system of local lords, possibly reporting in a symbolic fashion to a central, imperial power. Marc Miller’s Traveller RPG Universe is an excellent example of this, with all authority flowing from the Emperor, through the mouth of Dukes and other local nobles, and individual freedom existing only for those who can stay ahead of the news of their misdeeds as it travels from one star system to the next. Just as cool a story, if not more so — but it also makes sense, which is a plus.

However you decide people and information travel throughout your Universe, it is crucial to craft legal systems which have grown naturally and logically within those constraints. Everything your characters do will be affected by it.

Space law is the name of the game. At least, it is for now. At some point, it will just become “law”, and whether it occurs in space or not will merely be a delightful matter of jurisdictional competency.

Long before the first asteroid is mined for resources or the first potato grows in Martian soil, we will have laws determining who those resources belong to, and what the VAT rate on Martian produce is.

In fact, a lot of it already exists. At the international level, the main reference is the 1967 “Outer Space Treaty”, which establishes that the exploration and use of outer space shall be the “province of all mankind” — which sounds even better than the “final frontier” to me –, and that no government may claim a celestial resource such as the Moon, or a planet. So the U.S. owns the moon landing flag, but not the soil the flag is planted in.

Note, however, the use of the term “government”. So far, the world has not been able to agree on an international framework regulating the actions of private companies or individuals in space. The closest attempt so far was the 1979 “Moon Treaty”, which no space faring nation has ever ratified. As a result, and despite national attempts to provide a legal framework for private sector activity in space, companies are still free to claim and sell property rights on the Moon, and nobody really knows what will happen the day two rival companies encroach on each other while mining the same asteroid.

An Example of Space Law Complexity

This quick primer in the wonderful, and often hilarious, world of present day space law will allow you to grasp the complexity of building a functional legal system between planets, or between stars.

Your main character’s out in space, piloting a rust bucket of a cargo ship through a war zone to make a dangerous, yet lucrative, delivery. Proximity mines and automated laser turrets are bad enough, but who is going to pay the workers’ compensation afterwards, while she’s off on leave with a broken arm from all the shaky-camera bridge shots?

When hitherto unknown aquatic behemoths break through the ice surrounding the research base on the frozen dark side of tide-locked Proxima B, and wreak merry havoc before being beaten off by the common cold, how do you make an insurance claim for repairs when your provider’s nearest office is on Europa, over 4 light-years away?

An interstellar liner, its passengers all in cryogenic sleep, gets boarded and taken over by space-way pirates, light years from the nearest solar system. The pirate captain keeps checking the scanners for police — but then again, what police? Whose jurisdiction is it between the stars, whose laws apply, and what court could any hypothetical police officers possibly take the pirates to, with years of transit and detainment before ever seeing a judge, should they manage to take them into custody?

Space is, once again, big. Almost as big as the amount of trouble and conflict people are going to be able to cause in it. Unless you’ve decided to write Ayn Rand in Space, you’re going to need a solid, researched, and above all believable legal system in place to handle that trouble and those conflicts — even if it’s just so your maverick of a main character has something to rebel against.

What does your legal system say about answering the call?