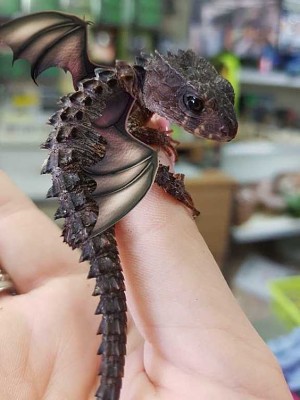 A little-known fact about me is that all of my books manage to incorporate a dragon in some form. Dragons have always fascinated me. First it was Smaug in JRR Tolkien’s The Hobbit, then it was Anne McCaffrey’s wonderful Dragonriders of Pern series. I’m a fan of Naomi Novik’s Temeraire books as well. Our world, sadly, does not have dragons that live up to the creatures of myth and legend. The best proxy for them — dinosaurs — died out millions of years ago and remain only as ghostly apparitions in the rocks.

A better-known fact about me is that I’m a genetics researcher. Over the past seventeen years or so, I’ve studied genetic variation and its role in human disease, co-authoring… *checks notes* more than 80 publications in Nature, Science, The New England Journal of Medicine, and other scientific journals. I’ve also had the pleasure of writing about science for science fiction writers, not only in my ongoing blog series but also for venues like Clarkesworld and Baen.

Back in 2014, I started writing a book that combined my two passions, dragons and genetics. The story has evolved over the years, but the basic plot is this: a genetic engineer goes to work for a biotech firm that aims to produce living, breathing dragons as household pets. This project draws more on my real-world experiences and people I know than any other. It grew from a novella into a full length novel. And, I’m especially pleased to share that Domesticating Dragons will be published by Baen Books in early 2021:

Baen Books is a widely respected publisher of science fiction and fantasy and enjoys a wonderfully loyal readership. I’ve worked with Tony Daniel before — he commissioned all of the nonfiction articles that I’ve written for Baen’s website — and it’s been a very productive partnership so far. Domesticating Dragons will be published in January 2021. Here’s the pitch:

The world needs a new pet.

In a future where a canine epidemic has wiped out all dogs, one company, Reptilian Corporation, aims to replace them with custom-made dragons. To that, they’ll need to domesticate an otherwise ferocious reptilian predator. Fresh out of a PhD program for genetic engineering, Noah Parker is thrilled to land a job at the hottest biotech in the American southwest. He hits the ground running and soon becomes one of Reptilian’s most productive genetic engineers.

Yet his success is a carefully planned subterfuge. Noah’s younger brother was born with a rare muscle disease. It’s incurable, unless Noah can find and prove the genetic mutation that’s responsible. He plans to use Reptilian’s considerable resources to do just that.

The company, meanwhile, begins producing various models of dragons en masse to fill the countless voids that dogs left behind. Noah wins the chance to design a much-needed dragon, an agile flying model reminiscent of the dragons of myth. But his quest to develop an ideal prototype uncovers disturbing secrets about his employer. Bringing them to light is the right thing to do, but might end his career and his already-remote chances of helping cure his brother’s disease.

You can expect more updates and a glorious cover design as we get closer to release date. If you’re on my Readers & Fans mailing list, you’ll get an update when ARCs and pre-orders are available.