It’s been a crazy couple of weeks and I owe the world an update. Two weeks ago Silver Queendom hit the shelves; it’s my first true epic fantasy and also my first book with Angry Robot. I’m back and mostly recovered from ChiCon 8, a.k.a. this year’s World Science Fiction Convention (WorldCon). TL; DR; it was an incredible experience. I’ll share some notes on it below, followed by the some updates on Deploying Dragons, which came out on Tuesday.

There were panels, of course — I did four of them (two virtual and two in person). I tip my hat to the programming staff, because they placed me on some excellent panels where I (1) had things to say, and (2) held some eager discussions with fellow panelists. The audiences, too, were smart and engaged. Surprisingly, my virtual panels went equally well — you miss a bit of the in-person experience, but the AirMeet technology was seamless.

I enjoyed the panels and readings and fan gatherings, of course, but I mainly went to meet people in the SF/F community. I met tons of fellow authors, as well as some industry pros and some people who are simply fans of the genre. Everyone was warm and welcoming. Even now, I imagine that Dan Koboldt business cards are falling out of suitcases and jacket pockets all around the world.

A funny thing happened on the way to the signing

Almost every published author has the experience of doing an event where no one shows up. When I signed up to do an autographing session, I pretty much guaranteed such an experience. Luckily I was assigned into the same slot as my friend Mike Mammay, fellow Baen author James Cambias, and author/publisher Alex Shvartsman. They’re good guys, all more established than me. Yet since none of us are super famous, I thought it would be nice and low-key. No massive crowds lined up for someone else. My only real goal was to sign more books than Mike. But when I checked the schedule the morning of the event, I saw they’d added an author to our session.

You can’t begin to imagine the crowd. It was seventy-five people deep from half an hour before to well after the session. Holy crap, what a fandom. I’m not at all surprised she went home with a couple of rockets. So yes, I did get the classic author experience of being the non-famous author at the signing. It was perfectly okay. Several people, perhaps disoriented by the crowd, even stopped by my table! Most of them were friends or people I’d met earlier at the con. 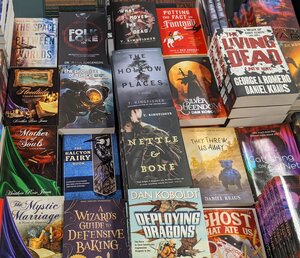 A couple of weeks before the con, I managed to connect with Sally from Larry Smith Booksellers, who are the primary book dealer at WorldCon. She was kind enough to stock many of my books, even some mass market paperbacks of my debut trilogy from Harper Voyager that are not easy to get. As a matter of fact, their large booth had several tables of books by authors who were taking part in the programming. As you can see from the photo at left, my books really stood out — a testament to the people who designed the covers.

And my books are in good company, too. Deploying Dragons is right next to A Wizard’s Guide to Defensive Baking by T. Kingfisher (a.k.a. Ursula Vernon), which won the Nebula and Lodestar awards last year. 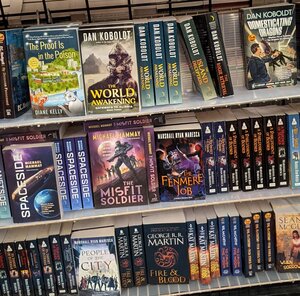 I joked that it was the best display of SF/F books I’ve ever seen, because normally we’re relegated to some dark, dingy corner of the brick-and-mortar bookstores. This store had tables, shelves, and stacks of books and I wanted all of them. As a matter of fact, I spent a lot of time loitering around the bookshop. That’s where I ran into Fonda Lee (her Greenbone Saga books sold out) and one of the many places I bumped into Zac Topping (his book Wake of War also sold out). The big bookstore drew authors like moths to a flame. Go figure.

I’d brought a suitcase full of my own books but it was much, much easier to send people over to Larry Smith to buy copies. Plus, Sally asked me to autograph everything they had left. She does numerous conventions all over the country, so there’s a good chance you can find an autographed book of mine at your next con. (if you do, tell her I said hello!). 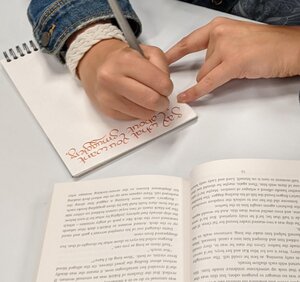 There’s a wonderful person I learned about from some fellow Angry Robot authors… the so-called drive-by calligrapher. If you say something clever on a panel, or perhaps have written a nice turn of phrase in a book, sometimes this person will walk up and hand you a note with those words. Only they’re captured in a colorful, hand-drawn calligraphy font.

Once I heard about this, it immediately became #goals for my author life. On my last day, literally my last hour at WorldCon, it happened.

People who stopped by Larry Smith Booksellers at WorldCon also got an early glimpse at my book that just came out on Tuesday. Deploying Dragons, book #2 of the Build-A-Dragon Sequence, is available in print and e-book. Which reminds me of a few important release notes:

Believe it or not, Deploying Dragons marks my 8th published book and my third release in 2022. You’re probably sick of hearing about Dan Koboldt books. I know I am! So I promise, no more for a while.

I’m kidding about that (probably). In the words of one of my favorite writers, “Once writing has become your major vice and greatest pleasure, only death can stop it.”