Pitch Wars has ended after a ten-year run. This event had a profound impact on my writing career and the careers of countless others. Even though I haven’t been closely involved with Pitch Wars for a few years, I feel the bittersweet sadness of the loss.

Pitch Wars is like that. It exerts a gravitational pull on everyone who enters its orbit. For me, that happened back in 2014. Those were the early days of pitch contests. I fell in with a number of kind, energetic, and thoughtful authors who ran many of them. Michelle Hauck, for example. She and her friends ran a number of events like Pitch Madness, Sun Versus Snow, Nightmare on Query Street… the list goes on. All of them were aimed at the same thing: helping authors refine their query/pages/manuscript to land a literary agent.

The timing was no accident. In January 2014, I was in the query trenches. The third book I’d written got me excited enough to try out this whole publishing thing. I heard about #PitMad, the Twitter pitching event run by a lady named Brenda Drake. Naturally, I figured out a way to analyze the hashtag and cajoled her into working up a guest post with some of the stats. (709 authors participated in #PitMad January 2014. It seemed like a lot at the time).

Brenda and I got to talking, and she told me about Pitch Wars, a more involved event in which experienced authors (usually those who were agented) helped aspiring authors revise/polish not just the query, but the entire manuscript. I offered to help set up the application system for entry because there were technical challenges involved. As we worked on that, I had some action on my traditional querying, and had managed to land an agent myself. When I told Brenda, she invited me to become a mentor. And I said ha ha ha no takebacks.

The system I set up for applications was completely janky. There were two components. First, there was an entry form that each applicant filled out (I remembered putting in each mentor’s name four times; that’s how I first got to know many of them). When someone submitted it, the contents of the form got e-mailed to a Gmail inbox set up by Brenda, where a phalanx of filters searched the message for each mentor’s name, and if found, would forward it to their address.

A fun side effect of that system? If you inadvertently used a mentor’s name in your partial, that mentor got your submission, too.

Mentoring in Pitch Wars is a memorable experience. Some of the best parts of it were:

The Struggle of Picking a Mentee

One aspect that doesn’t get talked about much outside of the groups is how hard it is for mentors to select a mentee. First, there’s the baseline work of going through all of the submissions. Most mentors get hundreds of them. Each has a query letter and some of the manuscript; in most cases, you had to read both to get a feeling for the quality.

Perhaps surprisingly, a lot of the query letters were inadequate. That problem is easily fixed, though I do wish every writer in the query trenches spent some time learning the craft of query letter writing. When you’re picking a mentee, however, you’re picking a full-length manuscript. In other words, it was the writing that mattered. Now I understand why agents often ask for a query along with the first X chapters or pages. For what it’s worth, after reading submissions for just a few weeks a year, I developed a deep appreciation for what agents do as their jobs.

The difficulty of picking a mentee comes in two forms. First, there’s the supply-and-demand ratio. Hundreds of submissions, one Pitch Wars mentee. It requires some brutality: a project that’s not one of your declared genre(s) or one that falls well outside the industry-accepted word count range must be triaged. This may seem outrageously unfair, but the reality is that you can’t be an effective mentor for such projects. Cutting them out lets you focus on authors who did their homework.

Even in my first year (2014), for example, I knew that a 148k doorstopper fantasy would require drastic revisions and was also simply too long for me to critique during the Pitch Wars revision window. I may have said as much on Twitter as a general comment. Little did I know that the author would read the tweet and swear vendetta against me.

With one mentee slot and hundreds to choose from — a harsh reality that reflects every literary agent’s situation, by the way — I had to read with brutal impatience. If the writing wasn’t strong enough or the plot felt contrived or I didn’t like the main character, I had to move on. It felt pretty horrible to do so, especially when I recognized the names of friends or beloved members of the community. I had to think about market viability as well. Some of the best projects I saw every year were unsellable (back in 2014, this was vampires/zombies). It sucked, because the writing was so good, but it also explained why those projects hadn’t landed an agent already.

The other difficulty of picking a mentee is this: even after the initial screening and the hard-nosed first read, there were too many good projects to choose from. Projects that, with guided revisions and some query workshopping, could land an agent and maybe a book deal. The authors of those works had to know they were in the running; I’d e-mailed them to ask for more material. But I could only choose one, and that sucked. You made one person’s day, and you broke the hearts of ten others. That’s why, as a strategy, I often tried to find other mentors to take on the projects I really liked but hadn’t chosen.

When Students Become the Masters

The only outlier for me was 2015, when I had several “Maybe” projects but none that really sang to me. Back then, the mentors would routinely swap projects behind the scenes. Two adult mentors told me that they’d gotten a project I really should see. It was called PLANETSIDE; it was a military / space sci-fi adventure with a splash of genetics. So aligned with my taste that the mentors didn’t understand why the author hadn’t submitted to me. No one realized that the author, Michael Mammay, was the same guy who’d written the 148k doorstopper fantasy in 2014.

He was back, and he was out for vengeance.

I’m embarrassed to say that I was completely unaware of this. We worked on the book together; it got even better than it was. Action was a little slow in the agent round — it usually is, for adult SF/F projects — but Mike landed an agent soon after Pitch Wars ended. I was happy for him.

We seemed to get along so well that I asked him to be my co-mentor the following year. He agreed, and we made a really good team. By that, I mean that he did most of the work while I mainly had fun. Pretty nice deal if you ask me. He gave feedback to anyone that wanted it. That was a ton of work. But I saw firsthand how hard he worked on his own writing and on critiques for other authors. Before long, I was asking him to critique my manuscripts, too. 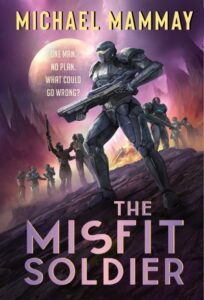 He eventually sold PLANETSIDE to my then-editor at Harper Voyager. (He got a better deal, too: my books were published under the now-shuttered Voyager Impulse imprint; his are with the main Voyager imprint). His book did well, like really well. After Planetside came Spaceside, and then Colonyside. His newest book, The Misfit Soldier, comes out today. So I guess Mike got the last laugh after all.

Walking Away from Pitch Wars

Pitch Wars was hard to step back from. There are benefits to mentoring as stated above, but the return on investment dwindled each year. I hated saying no to the same people over and over again. Furthermore, the contest had grown to where getting on as a mentor was competitive. The ability to charm Brenda Drake was no longer enough. I figured it was time to let other up-and-coming SFF writers enjoy the perks.

Besides, I had my own career to think about. The first nonfiction book based on my Science in Sci-fi blog series was published by Writer’s Digest in 2018. The second one, Putting the Fact in Fantasy, comes out in a couple of months. I’m still hosting #SFFpit (happening later this week) as well.

To be fair, I felt like I’d given back to the community and then some: I’d given them Mike, who went on to co-mentor with others and then play a leadership role. He was the one who told me it was ending.

The hard reality of Pitch Wars is that it’s a hell of a lot of work. Especially for the people who run the contest. Sure, it’s hugely beneficial for the authors (who enjoy free in-depth critiques as well as major exposure), and the literary agents involved get to choose from a wealth of newly polished manuscripts. Yet for the mentors and volunteers behind the scenes, the benefits are less concrete. But the cost in time and mental energy can be significant. I understand why it’s come to an end.

The Lessons of Pitch Wars

I hate it when good things end. Whether it’s a book series, a television show, a podcast, or anything else, when I learn something will no longer be, I feel the loss. I’m sure many of the others whose lives have been touched by PW feel it, too. That being said, I think it bears reminding ourselves some of the things that this event taught us.

Let’s be good to each other.