Yesterday I updated my author events page and realized that I have A LOT of exciting things coming up over the next few months. So much that it merits a blog post of its own. Without further ado, here are some coming attractions.

The tenth #SFFpit will take place on Wednesday, January 30th. This twice-annual event allows authors seeking representation/publication for their completed manuscripts to “pitch” their project in the space of a single tweet. Normally it would be in December, but feedback from agents suggested that it was not a great time of year. We’re hoping this will bring out more agents and editors to make requests.

I also volunteer for a more involved contest, Pitch Wars, in which agented/established authors pair up with aspiring writer to improve their manuscript. This is geared at writers hoping to land a literary agent, i.e. pursuing traditional publishing. My co-mentor Michael Mammay and I have been working with Chris Kerns on his manuscript MIXED REALITY. It’s a technothriller about an ex-con programmer who gets tapped to work on a revolutionary social media platform, only to discover that it (unsurprisingly) has a dark underbelly. Very timely, if you ask me.

Chris has been an amazing mentee. He was an experienced writer when he came to us, having self-published some books already. But he’s tackled each round of edits with confidence and enthusiasm. Mike and I are deeply impressed, and we have high hopes for the agent showcase on February 6th.

Putting the Science in Fiction has been doing well since its publication by Writers Digest Books in October 2018. I’m delighted to announce that the audiobook of PSIF will be released on February 12th. The folks at Tantor Media have lined up two incredible narrators — Kevin T. Collins and Emily Beresford — to record the audio. It will be available wherever audiobooks are sold. I can’t wait to listen myself.

February 15 and March 15: Nebula and Hugo Nominations Due

As long as we’re talking dates and deadlines, I should point out that the nomination deadlines for major SFF awards are rapidly closing. The Nebula Awards, which are voted on by SFWA members, have nominations due on February 15th. Nominations for the Hugo Awards are due on March 15th.

Did I mention that Putting the Science in Fiction is Hugo-eligible in the category of Best Related Work? Just checking.

April 3: Launch of The Triangle, My New Sci-fi Adventure Series 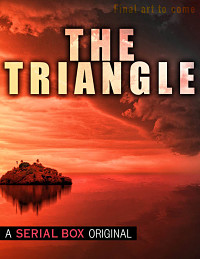 On April 3rd, Serial Box will release the first episode of THE TRIANGLE, a sci-fi adventure series I’ve co-written with Mindy McGinnis and Sylvia Spruck Wrigley.

A shipwrecked team of experts must unravel the secrets of the Bermuda Triangle, before it kills them all.
Each episode is available as an e-book and audiobook through the Serial Box app. A new one drops each week over the following nine weeks.

Visit serialbox.com/redeem and use the code TRIANGLEPREORDER to get a 15% discount on the whole season.

April 18-20: Guest of Honor at Norwescon

I’m humbled to be appearing as the Science Guest of Honor at Norwescon. This is a regional SF/F convention that hosts the Philip K. Dick Awards, as well as a lot of excellent programming. Over the course of the convention, I’ll give a talk on the Science of Sci-fi, do a Q&A with some other experts, drop in on a few panels, and sign some books. It’s going to be a great convention and I hope to meet some of you there.