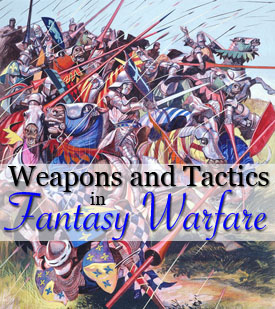 Michael Mammay has served as an active duty US Army officer for the past 25 years, and holds a master’s degree in military history. His current work-in-progress, PLANETSIDE, is a science-fiction mystery that is either almost done, or will never be finished, depending on the day of the week.

Weapons and Tactics in Fantasy Warfare

Weapons and tactics evolve together. It’s an immutable law of warfare. Military leaders will take the technology available to them and figure out the most effective way to employ it through study, or experimentation. The most effective military leaders are those who see the potential for change first and act to take advantage. When they see something doesn’t work, they make a change. When they see something does work, they’ll continue doing it right up until the point where their opponent makes a change.

I’m going to pull a lot of my examples from European military history, as that’s a fairly standard fantasy trope, but you can find many of the same lessons from other regions as well, on slightly different timelines.

If we begin in the age of edged weapons, where many fantasy books are set, the tactics tend to be relatively simple. Prior to the middle of the 14th Century and the dawn of cannon on the battlefield, warfare basically consisted of blunt or edged weapons. The weapons and armor changed, sometimes for cultural reasons, sometimes for tactical or technological, but the basic premise remained the same. The primary tactic was to get as many fighters at the point of attack as possible. Armies used ranged weapons as well, but those weapons generally focused on breaking up the other side’s ground forces, preventing the enemy from massing at the decisive point.

With hand to hand weapons, each weapon killed one man at a time, so if you could get a hundred of your soldiers in an area with only fifty of the enemy, it provided a huge advantage. This led to tight, shoulder to shoulder formations, many ranks deep. There were other reasons for tight formations–the effectiveness of a shield wall against missile weapons, mutual support to the fighters on each side, to name a couple – but the concept was the same. Tight packed formations moving in rehearsed step to provide the maximum level of force at the point of attack.

Add in heavy cavalry, and you have a new element of force, but the same basic concept.

There are different ways to incorporate it. For example, early on in the Wheel of Time series, Robert Jordan addressed it by putting moral restrictions on magic. Aes Sedai took vows, and they didn’t participate in warfare. Jordan simply removed the agent of change from the equation.

If there are mages or weapons on the battlefield that can throw explosions that rip up chunks of land (and bodies), no thinking army is going to stay in tight formation and wait for that to happen. If the opposing force consists of mindless drones, then sure. But if they’re sentient fighters, self preservation is going to take over. Even if the leader doesn’t see it, the soldiers are going to take it upon themselves to save their own lives. It would take an extremely disciplined force to continue a fight where some new horror is unleashed. Panic happens quickly.

Determining what will happen is a lot more complex. Different leaders will apply different technologies in different ways. If we look at the history of warfare from about 1860 to 1920, we can find a lot of lessons that we can apply to fantasy. There were no mages on the battlefield, but a series of new technologies made warfare more lethal by an order of magnitude in a short period of time. For the sake of space, I’m going to oversimplify and boil things down to the applicable lessons.

The American Civil War and the Rise of Rifled Weapons

In 1860, almost all western military leaders had been educated focusing on the lessons of the Napoleonic wars. The smooth-bore muskets and cannon of Napoleon’s were fairly inaccurate and slow to load, lending themselves to the continued use of tight formations in order to get the highest concentration of firepower from inaccurate weapons. 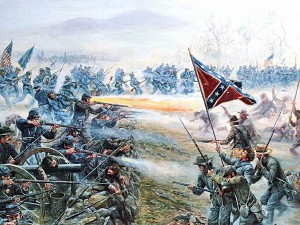 During the American Civil War, the introduction of the rifled musket onto the battlefield increased both the range and lethality of a soldier, but leaders didn’t immediately adapt, leading to increased casualty rates. Famously, Pickett’s charge in 1863 saw a force of more than 12,000 Confederates decisively defeated by about half that number of Union soldiers. Increased firepower meant that having the most men at the point of attack was no longer a universal rule.

The Franco-Prussian War (1870-1871) offfered similar hints at the effect of increasingly lethal weapons, but the real revolution in warfare happened later, at the start of World War I.

The Effect of the Rising Lethality of Weapons

In a little over forty years, the safe zone for offensive maneuvers and concentration of force evaporated under the expanded range and speed of fire on both sides. The defense, with trenches and fortifications and marked advantage in firepower, became supreme. As military leaders continued to push for the offensive action required to win a war, casualties rose into the millions. The increasing death toll and failure to achieve offensive success led to a relative stalemate by 1916.

Finding a Solution to the Stalemate

How the two sides overcame the stalemate caused by increased lethality is instructive for writers, because each side came up with a different solution. The Allies employed a technological solution, introducing an offensive weapon, the tank, to overcome the previous superiority of the defense.

The Germans made tactical changes, implementing infiltration tactics (also called Hutier tactics) and relying on speed and surprise to penetrate the enemy line, bypassing strongpoints and leaving them for later waves of the attack.

Key factors to keep in mind as you develop the military side of your world:

1. There will always be cause and effect.

The first time a new weapon is unleashed, it can have a destructive result. But if a weapon has been around for years, the enemy will adjust. How they adjust…that’s up to the writer. N. K. Jemisin handled the issue in a unique way in her brilliant book, The Hundred Thousand Kingdoms. The Arameri had such a dominating weapon that their enemies simply stopped fighting. (That’s not a spoiler. It’s known from the first pages.)

2. There are many ways to adjust to a new capability.

This gives an author a lot of options, and can make for unique world building. If one side employs a new offensive weapon, the other side can compensate in several different ways.

3. As a rule, the more lethal the weapons, the more an army will spread out.

As the army spreads out, it increases the strain on leadership and communications, because you now have to transmit orders over a larger area, but that’s a discussion for a different post. Suffice it to say that one could use magical communications, or other creative means to fill these roles. There are two reasons for spreading out a force.

4. The speed of adjustment to a new technology or tactic can vary based on many factors.

Leadership plays a big role. Better leaders adapt faster. Communication and information have a big part. In the information age, tactics and weapons can change by the week, and often have during recent wars.

A real life example of that is the Hundred Years War, where the English and their longbows dominated the French for nearly a century, partially because of the French notion of what a Knight should be. In fiction, you could have a culture of warriors who believe fighting should be done a certain way, thus making it hard for them to change when the enemy develops a better capability.

In summary, there are lots of great ways to build armies and warfare into your fiction. If you want realistic warfare and you are adding elements beyond what existed in a certain period of history, you will want to account for that change in your work.

Put yourself in the boots of the generals on both sides of your conflict. If you saw something happen on the battlefield, how would you react? What orders would you give? Learn how your military leaders think, their education, their values. Sometimes the results might surprise you, and your battle scene may take a different turn.