Like many fantasy authors, I wanted to write in this genre because I love reading in it. Discovering a great new fantasy novel — especially the first of a series — is simply thrilling. The downside of learning to write fiction is that one begins to read everything more critically. Always looking for plot holes or awkward prose or metaphors that don’t work. I blame my writing classes and critique groups for this. Then again, this kind of training also brings appreciation for things that established fantasy authors have done well.

This week, I began thinking of my favorite fantasy novels of all time and what I admire about them. As an author. The simple fact that these books have been published at all reflects their authors’ abilities for characterization, world-building, plotting, suspense… all of the elements of a great fantasy novel. But here’s what my favorite fantasy novelists did especially well (cover images courtesy of Amazon):

1. The Lord of the Rings for defining high fantasy 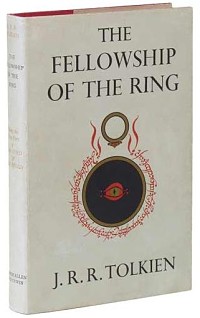 One day in the early 1930’s, an Oxford professor looked at a blank page and, feeling inspired, wrote “In a hole in the ground there lived a hobbit.” That initiated a series of events that eventually took us to right here. First with The Hobbit, and later with the Lord of the Rings, J.R.R. Tolkien essentially defined the genre of high fantasy. These were the books that my parents fell in love with, and encouraged me to read when I was in the 4th grade.

Tolkien’s work defined the tropes, the quality, and the epic feel that defines fantasy today. His work didn’t just inspire my love for the genre, it inspired my love for books. I still remember where I was when I finished The Fellowship of the Ring: on my parents’ couch in the living room. That’s a moment I’ll never forget. Also noteworthy here: Peter Jackson, whose masterful films brought fantasy to the mainstream.

2. The Dragonbone Chair, for character arcs 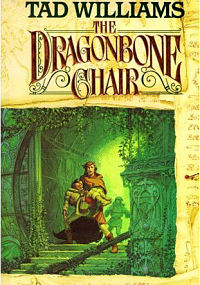 (Spoiler warning) My college roommate gets the nod for getting me to read Tad Williams’s The Dragonbone Chair, and I remember that I found the main character (Simon) rather annoying. He’s a castle scullion, sort of your layabout, short-attention-span teenager. We follow him on this incredible journey, fraught with magic enchantments, prophecies, massive battles, everything I want in an epic fantasy. And by the end of it, he’s chosen to become the king. And by then, he deserves it. What a character arc.

3. The Wheel of Time, for its magic system

There are many things to love about Robert Jordan’s series (and perhaps a few things to find irritating; I’m looking at you, bath chapter!) but one aspect I really admire is the magic system. The One Power. It has elemental components and gender differences. It’s as well thought-out as any magic system in fantasy literature. Using the One Power is a skill, almost a science. It comes with limits, too, and extreme dangers.

Another thing I admire about Jordan’s series is the fundamental good-versus-evil conflict. Jordan talked about it sometimes in interviews: he believed that great fantasy had this central dichotomy. He managed to make the Dark One is a better antagonist than Tolkien’s Sauron. We don’t often meet the Dark One as a character; rather, we see how he seduces people to his side, how he plays his top lieutenants (“The Forsaken”) off of one another. Good stuff.

4. The Magic of Recluce, for strong female characters 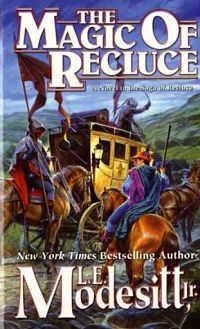 In fairness, I think that L.E. Modestitt, Jr’s magic system (order versus chaos) is also unique and fascinating. The two forces balance one another, and chaos conveniently explains why gunpowder never really took hold in Recluce: a chaos wizard could easily wreak havoc with an enemy’s firearm. The magic isn’t just part of the world, it’s fundamentally woven into every aspect.

Yet what really stood out to me about the Saga of Recluce were the strong female characters. They routinely embarrass the main character (and other men) in armed combat. I remember one scene where a male soldier disobeys his female commander’s orders. She simply asks if he’d prefer to fight her on his horse or on the ground. Even though he tries to cheat, he’s dead in about five seconds. 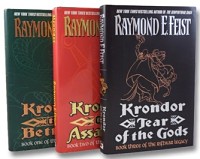 While waiting months or years for the next installment of the Wheel of Time, I filled the fantasy void with Raymond E. Feist’s wonderful books. There were so many of them, and you could read them in just about any order. The characters were both deep and fascinating; I loved following them from childhood all the way to old age across multiple series.

We see them raise families, and then it’s their children who are off having adventures. Feist is also one fantasy author who doesn’t shy away from killing off his characters. Sure, I didn’t want to see them die, but it was good training for when I discovered George RR. Martin.

Many years ago, I heard about a new light fantasy series; it was aimed at middle grade, but entertaining for adults. And you could read a book in a couple of hours. Those promises were all fulfilled; I read Harry Potter and the Sorceror’s Stone on an airplane. J.K. Rowling created a wonderful world, with so many intriguing characters that virtually any reader could find someone to identify with. The truly wonderful thing is that she is that she’s built an incredible audience: an entire generation that will be ready for adult fantasy novels, if they’re not already. 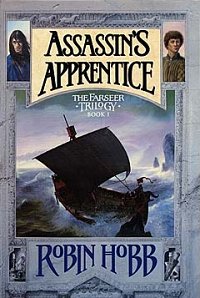 When I started reading Robin Hobb’s fantasy series, the use of first person narration bothered me a little. When I got past that, I realized just how close it brought me to the main character. When he suffered, I suffered. It was a unique experience, and of course all of the other elements in this series (world building, magic system, etc.) were solid. But the POV was truly unique and drew me in completely.

(Spoiler warning) There’s this scene, later in the book, when the MC’s familiar (an animal bonded by a magic user) — a wolf that’s been his protector and constant companion for years — joins him in his dream for one last hunt together. The wolf is old by this point, weak and dying. But in the dream there’s this image of this young, energetic wolf fading away as he races off to the hunt. Then the MC wakes and the wolf has died in his arms. The grief I felt still haunts me.

8. A Game of Thrones, for great characters who die in horrific ways

George RR Martin took ten years writing the first installment of his A Song of Ice and Fire series, and it shows. The complex world is filled with so many characters that there’s an appendix to help readers keep track of them all. These characters are fascinating. Martin changes viewpoints often, so you come to know many of them. You come to love them. And then they die. Violently. You tell yourself, OK, I know how it works, so I’m only going to become attached to this super-cool character who surely won’t die. Soon after, THAT character dies.

HBO’s wonderful adaptation of the series has done us a huge favor, because it’s inspired a huge interest in modern fantasy. I have friends and relatives who’d never read a fantasy novel but are plowing through Martin’s thousand-page books because they love the TV series so much. They tell me, “This Ned Stark guy is so awesome. And he’s played by Sean Bean!”

I just don’t have the heart to tell them.

9. The Amulet of Samarkand, for narrator voice. 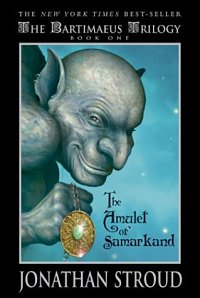 Agents and editors often admit that when they read queries or partials, they’re looking for a unique voice. This is a difficult thing to hear for many aspiring writers; there’s simply no formula for creating it. No how-to book. To see it done well, however, read the Bartimaeus books by Jonathan Stroud. His first-person POV narrator is a snarky, sarcastic djinni who makes  jokes in the book’s footnotes.

Interestingly, his chapters are interspersed with more distant third-person POV segments with other main characters. It’s the only time I’ve seen that done, and done well. No matter the other main character, Bartimaeus always steals the show. Stroud also deserves points for creating a compelling magic system, in which magicians summon demons from another world, bind them, and force them to do their magical bidding.

10. The Lies of Locke Lamora for plotting and pure roguishness 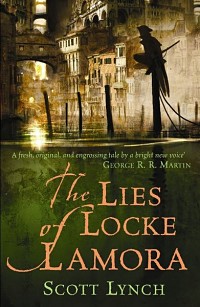 If you have a Kindle, Amazon lets you download a sample chapter for most (if not all) books in their marketplace. At the end of that chapter, there’s even a link to buy the rest of the book and have it sent to your Kindle right away. When I finished the sample of Scott Lynch’s debut novel, I clicked “BUY NOW” so quickly I nearly broke my Kindle in half. The world he created, the rogues within it, and their complicated schemes drew me in immediately.

I love the setting of these “Gentleman Bastard” books. I wrote Scott Lynch to ask him how he did world-building so well. He told me, “The answer, in my case, is to do as much research, speculation and note-taking in advance as possible.” I’d call that good advice, and it certainly works for Mr. Lynch.

As authors, we’re told to write what we love. I’d take that oft-used bit of advice further and say: aspire to write like the books you love.

What fantasy novels are your favorites, and what do you admire about them? Please leave a comment and share!