This article is part of the Science in Sci-fi, Fact in Fantasy blog series. Each week, we ask an expert to tackle some aspect of fantasy writing (cultures, weapons, horses, etc.) or a scientific / technological concept pervasive in science fiction. Please join the mailing list to be notified every time new content is posted. 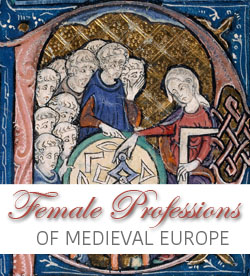 Jerry Quinn is a classical actor and history buff with a special interest in 10th-12th century Normandy. He’s spent a dozen years performing at Renaissance Faire, where he’s learned both how to pick up a prostitute in Shakespearean English and when it’s okay to let go of obsessive historical accuracy for the sake of making sense to the audience.

He’s also the editorial administrator of the Ubergroup on scribophile.com, “the most productive writer’s group on the internet,” where he herds around 200 cats writers and preaches the dramatic principles of Lajos Egri.

He’s currently freelance editing and operating a bnb in Manhattan where he hosts the New York Scribbers Weekly Writing Session.

Home-maker, midwife, prostitute. Sometimes it seems like those are the only female archetypes in medieval fantasy, unless you’ve got a chain-mail-bikini clad female ‘warriors’ wielding a sword that weighs more than she does.

So, aside from popping out babies, what exactly did women… do? As with all things fantasy, an author doesn’t need to stick strictly to history, but a bit of logic in your world-building goes a long way. To help you extrapolate the role of women in your fantasy world, this article aims to give you a fundamental understanding of the reasons why things often panned out as they did. The first thing to consider is…

Ask your mother. Ask any mother. Then ask them how it would have gone without an epidural.

Thanks to modern medicine, childbirth today has drastically lower chances of infection and hemorrhaging, not to mention those lovely painkillers. Relatively, it’s a cakewalk. And any mother will tell you it’s still no cakewalk.

In addition to the difficulty of childbirth itself, it’s important to remember that birth control (1960s) made a huge difference in the lives of women. Suddenly, they could choose not to reproduce. Before that, the work a woman took on was often limited by what she could do while pregnant or with a nursing infant in tow. One need only ask a modern stay-at-home parent how much else they get done during the day, and remember that before infant formula (1950s) that parent had to be the mother, as she was the only one who could feed the child. But of course…

There Were Exceptions to the Rule 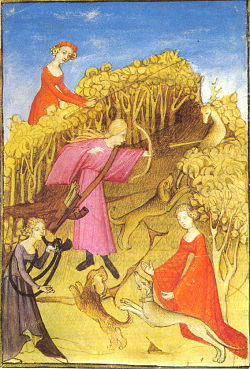 The infertile, the post-menopausal, the celibate, and those wealthy enough to rely exclusively on wet nurses, were all free to pursue professional callings. But remember when populating your fantasy world that those were exceptions. If your female character’s time is not taken up largely by the continuation of the species, there must be a specific reason.

In addition to those with genuine religious callings, convents provided a refuge for female non-conformists and intellectuals. Nearly 10% of women in medieval France and England never married, and ‘marriage to the church’ provided many of them with a livelihood and education not otherwise available. Female writers, artists, and religious scholars were nurtured by the church, as well as botanists, healers, and educators. The medieval church was a major economic enterprise, and the Abbess of a large convent was a force to be reckoned with.

For the other 90% of women, childbirth and childcare figured largely into the equation, but that didn’t prevent them from working at all, especially when you consider…

Most businesses were family-owned.

Women with children participated in nearly every economic aspect of medieval life. In most cases, only a man was allowed to own property or a business, but his wife, daughters, mother, and sisters were invaluable to operating it. Frequently, women ran the entire show as proxy to absent male relatives. 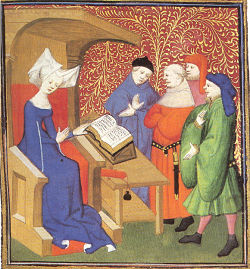 “Because that knights, squires and gentlemen go upon journeys and follow the wars, it beseemeth wives to be wise in all they do, for that most often they dwell at home without their husbands who are at court or in divers lands … The lady who lives on her estates must be wise and must have the courage of a man. She should not oppress her tenants and workers but should be just and consistent. She should follow the advice of her husband and of wise counsellors so that people will not think she is merely following her own will. She must know the laws of warfare so that she can command her men and defend her lands if they are attacked. She should know everything pertaining to her husband’s business affairs so that she can act as his agent in his absence or for herself if she should become a widow. She must be a good manager of workers. To supervise her workers, she needs a good knowledge of farming. She will be sure to have adequate supplies for the spinning and weaving of cloth for the wise housekeeper can sometimes bring in more profit than the revenue form the land.”

Managing an estate is no mean task: similar to managing a large hotel, if that hotel might also have to mobilise as a military unit. If your political system is feudal, any man with estate was away, either at war or schmoozing his superiors, a good portion of the year. The character who consents to let your adventurers sleep in the barn is almost certainly the Lady of the manor, not the Lord.

In towns, the wives of merchants or artisans could assist their husbands in his trade, or pursue their own. Evidence of multiple proficiencies is shown in a 1363 London city ordinance specifying that men had to keep one trade, while women might pursue as many as they pleased.

That exemption, however, speaks to the fact that although women could learn trades, they were rarely permitted to master them. Medieval guild records list many women, but rarely in positions of power or supervision, and often limited to lower levels of production by bizarrely specific laws. A female dyer, for example, was not permitted to lift cloth from the vats, and a female pastry-maker was only permitted to carry one box of biscuits around town at a time.

Your female townswomen likely worked multiple odd jobs to make ends meet, possibly while carrying a baby on her back. It would also be entirely reasonable to see a competent baker’s, cooper’s, or wheelwright’s wife practically running the whole business for him. Everyone in town might know she was the one to ask if you wanted something done, even though he was officially speaking for the family at guild meetings.

The textile industry was full of women. Medieval silk-weavers were a notable exception among guilds, with women controlling every aspect of production, and dominantly female supervisors and guildmasters. In other trades, the best legal loophole was if a woman’s husband died. Many notable widows inherited property or businesses in their own right, often to huge financial success. 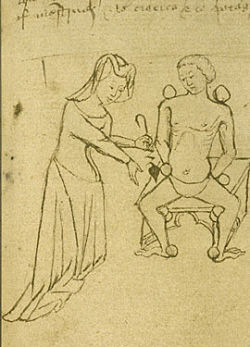 Although English universities barred female medical practitioners (The Holy Roman Empire, it should be noted, did not, and there were German female doctors) men have historically been terrified of childbirth. Midwives attended to birth and general female health, making them effectively the ob/gyns of the middle ages.

Although it’s easy to picture women working as midwives, in textile production, or as cooks and washerwomen, for some inspiration, here’s a list of unexpected trades from the Paris guild records of the 1300s. In all cases, there were less women than men, and some trades were later restricted to men only, but there is at least some historical precedence for women working at all in the following male-dominated fields:

So, what about Joan of Arc? 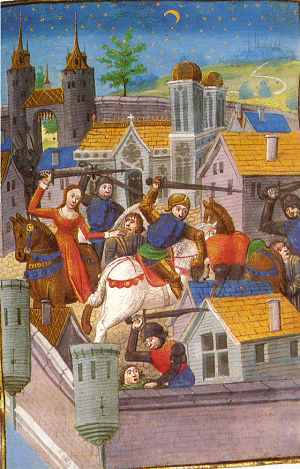 She wasn’t as exceptional as you might think, although history is of course full of bias. Pope Urban II’s call to the First Crusade in 1095 used explicitly masculine language, and an unattributed account of the Third Crusade stated “A great many men sent each other wool and distaff, hinting that if anyone failed to join this military expedition, they were only fit for women’s work.” Muslim records, however, make note of the active involvement of Christian women, not only as camp followers, but also as strategic advisors and active combatants.

It’s important not to overlook the importance of camp followers. Historically, the domestic needs of an army heavily depended on the informal services of camp followers, everything from cooking and washing to nursing the wounded. Nor were the camp followers necessarily prostitutes; often the wives and children of soldiers simply moved around with them.

Camp followers were also extremely likely to pick up whatever makeshift weapons were available and enter the line of battle with their men. While female knights are certainly rare, so were knights in general. It’s important to remember that medieval armies were a mixed lot, and only a small percentage were full-time professionals. A large portion of the forces were levied from the poorer classes, and among those, an untrained woman armed with a pointed stick was just as useful as a man in the same position.

Formal military supply infrastructure did not become thorough enough to eliminate the need for camp followers until late 19th century, so a fantasy world modelled on any period before that would have had a large and ragtag secondary army of camp followers along for the journey.

A queen and her maidens (Wikipedia)

On the other end of the spectrum, highborn women often prominently rallied and directed their own troops. In the early 12th century, Empress Matilda was the first woman to pursue a claim to the post-conquest English throne in her own right, and in the later 12th century, Eleanor D’Aquitaine is famous for accompanying her first husband on crusade, and later rebelling against her second. In the 14th century, Marguerite D’Anjou commanded the Lancastrian forces almost exclusively in the name of her mentally incapacitated husband.

Although it’s important to remember when building a fantasy world that by definition there were only as many nobles making waves in a feudal economy as there are Sam Waltons, Elon Musks, Bill Gates, and Warren Buffets making waves in ours, among this small but well-recorded set, it’s very realistic to have at least one dauntless highborn women per generation flying in the face of expectation.

Although faced with much steeper challenges of childbirth and childcare before the availability of birth control, modern medicine, and infant formula, women participated widely in every level of the medieval economy. The wives of farmers, craftsmen, and soldiers worked alongside them, often inheriting the business on their husband’s death. Highborn women managed everything from estates to kingdoms in proxy to their husbands, and ‘marriage to the church’ allowed women to pursue art, literature, and medicine.

On midwifery, the original text by Trotula of Salerno, first published in the late 1100s. The Trotula: An English Translation of the Medieval Compendium of Women’s Medicine

For a Christine de Pizan’s spectacular feminist opinions from the early 13th century, and lots of other cool stuff, The Lady in the Tower: Medieval Courtesy Literature for Women

For more about townswomen and merchants wives, From Workshop to Warfare: The Lives of Medieval Women, Women in the Middle Ages, and Women and Work in Preindustrial Europe, the last of which also contains more excellent material on midwifery.

For women in battle, we have The woman warrior: Gender, warfare and society in medieval Europe and Women on the Third Crusade (Note: these are academic papers, not books.)

Editor’s Note: The images in this post are from an excellent Wikipedia article, Women in the Middle Ages.