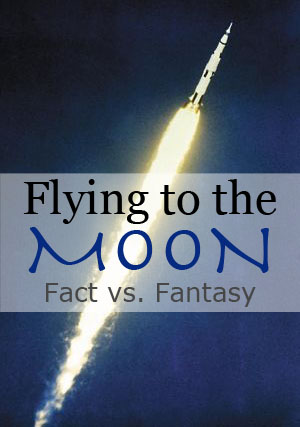 This article on flying to the moon is part of the Science in Sci-fi, Fact in Fantasy blog series. Each week, we tackle one of the scientific or technological concepts pervasive in sci-fi (space travel, genetic engineering, artificial intelligence, etc.) with input from an expert.

Today’s expert is physicist Jim Gotaas. In what seemed like a natural progression from an early interest in both science fiction and physics, Jim passed through the gates of a PhD in Physics to a career in research and teaching physics, with occasional stops along the way to enjoy astrophysics and space travel. Unfortunately, the attempt to combine research and teaching with writing SF on the side turned out to be too tough. But having now served his time as a professional physicist, he’s happily writing SF as a hobby.

Flying to the Moon

There’s a long history of stories about people traveling to the Moon.

If you’re old enough, you may remember a classic song called “Fly Me to the Moon”, that implies that love is all you need to get there.

In ancient Greece, Lucian of Samosata used a whirlwind that lifted and blew the people to the Moon in “A True Story.” Of course, he didn’t realize that most of the distance was actually vacuum, not air.

In the 1620s, an English bishop named Frances Godwin used a harness carried by wild swans in “The Man in the Moone.” Too bad swans can’t actually fly through a vacuum.

By 1865, Jules Verne had advanced to using a huge cannon in “From the Earth to the Moon” – which would unfortunately have crushed the occupants during the launch process.

In 1900, H. G. Wells used a fictional antigravity substance, cavorite, in “The First Men in the Moon.” The only drawback here is that we don’t know how to make cavorite.

By 1950, George Pal’s film “Destination Moon” (with technical assistance from Robert Heinlein) used an atomic-powered rocket that could launch from the Earth’s surface and travel directly to the Moon, and land there, then return. For various technical and political reasons, we’ve never developed real atomic rockets.

Unfortunately, reality is a bit trickier. The Moon is 384,000 km from the Earth, and the vast majority of that distance is in the vacuum of outer space.

In 1969, Apollo 11 was the first manned mission to actually reach the surface of the Moon. It was a bit more complicated than the above approaches. Below we can see the actual trajectory of the Apollo missions (this graphic is based on Apollo 8): 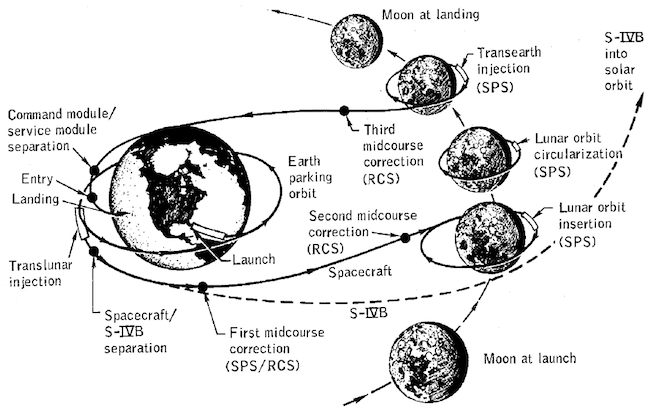 Here you can see how complicated the actual flights are. This is driven mainly by the limitations of our rocket technology, and partly also by the fact that the Moon is a moving target.

It took the Apollo missions three days to reach the Moon. In that time, the Moon moved about 365 thousand kilometers in its orbit. If their trajectory hadn’t taken that into account, the Apollo spacecraft would have just sailed off into the solar system.

The biggest problem we face is escaping from the Earth’s gravity well. This is a common concept in spaceflight. When we’re on the surface of the Earth (or any other planet or moon), we have to provide energy to leave the surface and reach outer space. You can visualize it as a deep well, and we’re standing at the bottom. To get into space, we need to climb up to the mouth of the well, and that takes energy. 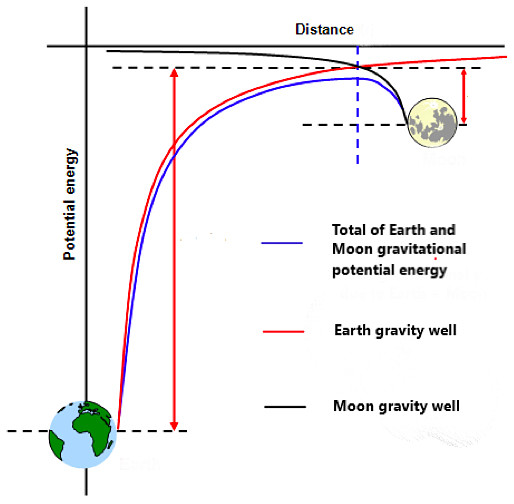 The gravity wells of the Earth and the Moon 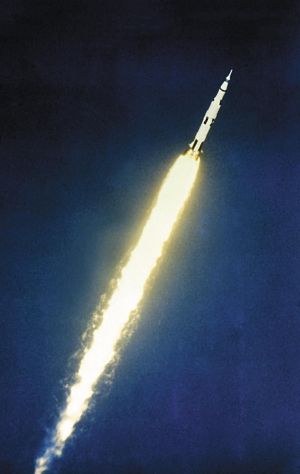 The picture above roughly shows the relative scale of the gravity well at the Earth’s surface and at the Moon’s surface. Note the Moon’s gravity well is much smaller than the Earth’s (in actual fact, about twenty times smaller), which is why in the future, bases on the lunar surface could provide resources that would be much easier to get into orbit and send around the solar system.

One drawback of this type of launch is that we end up throwing away the first three stages of the rocket. Most of the fuel (chemical energy) is used up lifting the throwaway stages consisting of engines and fuel (in the case of the Saturn Five, the fuel was kerosene or liquid hydrogen, burned using LOX, shorthand for Liquid Oxygen).

Here you can see a schematic of the complete Saturn Five/Apollo vehicle: 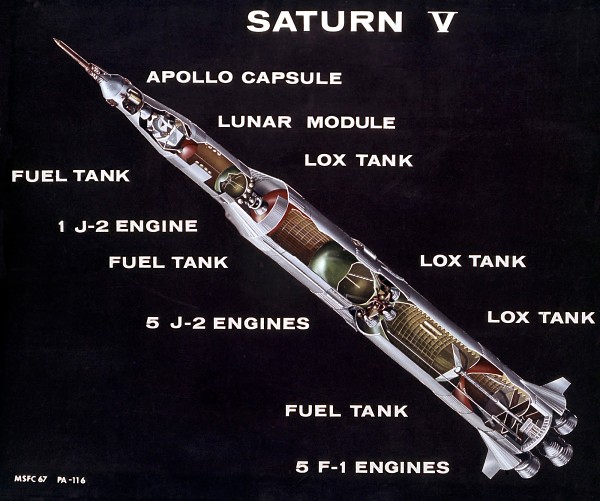 The Saturn V’s first stage carried 770,000 liters of kerosene fuel and 1.2 million liters of liquid oxygen (needed to burn kerosene in the absence of atmosphere). At liftoff, the first stage’s five F-1 rocket engines ignited and produced about 33 million newtons of thrust. Around 67 kilometers up, the F-1 engines shut down and the first stage fell into the Atlantic Ocean.

The third stage carried 252,750 liters of liquid hydrogen fuel and 73,280 liters of liquid oxygen. The stage’s single rocket engine fired until the vehicle was moving fast enough to reach Earth orbit, producing about one million newtons of thrust. About two and a half hours later, the third stage engine restarted to send the Apollo spacecraft off toward the moon.

Here’s a more detailed view of the actual Apollo spacecraft:

The descent stage was left behind on the lunar surface while the ascent stage lifted off to return to Lunar orbit and dock with the command module. For the return flight, the command module pulled away from the now-useless third stage. This last remaining part of the Saturn V drifted away into a deep space orbit around the Sun.

We can see that most of the Apollo spacecraft vehicle was actually discarded during the mission — only the small command module returning to Earth via splashdown in the ocean.

It’s interesting to note that as an object (such as the command module) returns to the surface of the Earth, it regains all the gravitational energy it ‘lost’ on launch, which would make it go extremely fast. That’s why the command module needed to use aerobraking (actually burning up and shedding its ablative covering) and three parachutes to slow down on return.

The first mission that brought men to the actual Lunar surface was Apollo 11, launched July 16, 1969. The last crewed lunar mission was Apollo 17, launched on December 7, 1972. No person has been back to the Moon since then.

Science fiction fans and space enthusiasts thought and hoped the Apollo program would be just the start of our crewed exploration of the solar system. Unfortunately, politics and financial constraints meant that in the intervening years, humans have stayed close to our home world, only going as far as low Earth orbit in facilities such as the Russian Mir station, the US Skylab, and finally the International Space Station.

There have been numerous robotic probes that have explored many parts of the solar system. These have produced wonderful science but lack the dramatic impact of actual human exploration. In the second decade of the twenty-first century, we’re finally starting to see renewed public, government and commercial interest in human exploration and even colonization of the Moon and Mars.

It could be the beginning of a new, exciting chapter in human exploration of space. But that’s a story for another time.