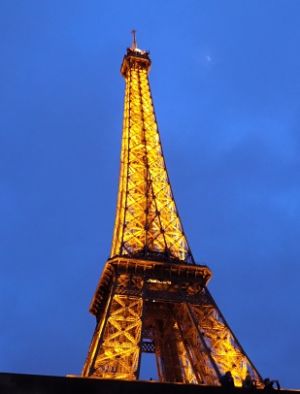 Today’s expert is me, Dan Koboldt. Believe it or not, I have a degree in French. And I’ve just returned from a week in France, so the cultural quirks are fresh in my head. In case you somehow were not aware, I’m also a working genetics researcher, avid bowhunter, and sci-fi/fantasy author.

France as a Fantasy Culture

I’ve been to France a few times, but this is the first time I’ve been there since becoming a professional writer. I couldn’t help but think about the similarities between visiting there and dropping right into a fantasy culture. I’ve heard Brandon Sanderson say that effective worldbuilding is about choosing a few key, unique details and going deep. So let’s dive in.

There’s a misconception about France that, because it’s in western Europe, everyone there sort of speaks English. Not even close. Outside of the tourist traps, I’d say 90% of what you read and hear is in French. The official purpose of my meeting was an academic workshop, and there everyone did speak English. We scientists are lucky to have the real-world equivalent of a fantasy world’s “Common Tongue.” Hotel front-desk staff (not maids), museum personnel, and other people who have to deal with tourists usually did, too. But that’s generally it: the rest of the country is perfectly happy to speak in French and feign confusion if you try anything else.

I will say this: being able to speak French was a huge advantage. Not only because I could communicate with taxi drivers and metro passengers and the like. Even though I was told that my accent reveals me for a non-native speaker almost instantly (curses), my efforts always brought a smile, sometimes a compliment. I’m certain it won us better treatment on several occasions. We had waiters bringing us extra bread, bartenders coming by to pour us free shots of vodka. It was awesome.

Bottom line, attempting to learn the language of the land won us all kinds of points with the locals. And helped us out of some jams, too. 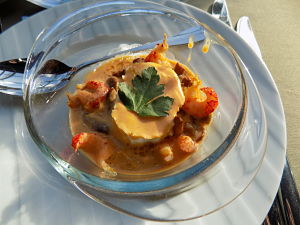 Food and cooking are integral to many cultural identities, and the French have a certain reputation to uphold. I didn’t eat anything that was less than excellent over there. Even a $4 sandwich you buy off the street for lunch is delicious. Some of the dishes were combinations of things I’d never have thought to put together, like this excellent crayfish soup over poached egg. Needless to say, we ate really, really well.

The cultural differences surrounding food aren’t simply limited to what’s on the table. In France, they really don’t like to rush meals. Dinner might start as late as 8 or 9 at night, and could go for a few hours, even at a modest restaurant. It’s expected that you take your time to enjoy every part of the meal, including the “bonne degustation” between courses. In fantasy terms, it wasn’t just what’s in the pot of stew, but how they served it.

3. History Tells in the Architecture

I love old buildings. Castles especially, though those are hard to come by (and usually no more than ruins, in most of the “historic” castles I’ve seen in Europe). It really struck me how fantastic the architecture was all over Paris.

Many of the buildings were 200 or 300 years old, but still well maintained. The style and architecture were simply stunning. It’s an incredible feeling when you see a building and can really feel the age from it.

Knowing that it was built several human lifetimes ago adds an almost magic allure to places like this. Ancient history reflected in buildings is one of my favorite kinds of worldbuilding. George RR Martin does it well, as does Scott Lynch. It’s a powerful technique for building a story into your setting, and emphasizing that the world had a lot going on long before the plot started. 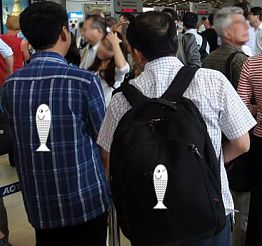 April 1st was always a fun day in my French classes, because we followed the tradition of “Poisson d’Avril” — literally “Fish of April” — a game in which children try to surreptitiously place paper fish on the backs of their friends as a joke. The French also follow the normal practice of April Fool’s Day jokes (often via phony news stories/articles), but the Poisson d’Avril is something all their own. There’s a nice article over at the French Today Blog.

I had never been in France on April first until last week, and needless to say, I took full advantage. I ignored the fact that it’s more of a children’s game and just went about putting paper fish on the backs of unsuspecting workshop attendees. These were received in good spirits and with much amusement by my French colleagues.

There’s nothing like immersing yourself in another culture to pick up the details that make it so different from your own. As I said, Paris was not so different from major cities I’ve seen in the U.S. Dozens of little things made it different, made it fantastic. I was sad to leave, but glad I could bring back this little bit of it to share with you.