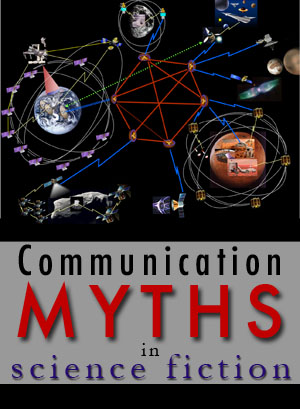 This article on future communication for writers is part of the Science in Sci-fi, Fact in Fantasy blog series. Each week, we tackle one of the scientific or technological concepts pervasive in sci-fi (space travel, genetic engineering, artificial intelligence, etc.) with input from an expert. Please join the mailing list to be notified every time new content is posted.

S.B. Divya is a lover of science, math, fiction, and the Oxford comma. She is the Nebula Award nominated author of Runtime and the Hugo-nominated co-editor of Escape Pod, with Mur Lafferty. Her fiction has been published at Analog, Uncanny, Apex, and other magazines. Divya holds degrees in Computational Neuroscience and Signal Processing. She’s worked in the digital communications space for fifteen years, including designs for VDSL and 10 Gigabit Ethernet, and she’s participated in ITU and IEEE standards development. She is currently a data scientist working on AI-driven sleep insights at Bodymatter. You should follow her on Twitter.

The Future of Communications

That moment where static jams a critical video transmission, or where the aliens take over our satellites, or where intrepid explorers land on a new planet and radio each other across continents: All three of these scenarios have pitfalls when it comes to real communication systems and how they work.

A communications system consists of a transmitter, a receiver, and a channel. The channel can be a copper wire, a planet’s atmosphere, or the vacuum of space. The receiver needs to know something about the transmitter in order to capture and decipher the signal. The amount of information that a channel can handle depends on its bandwidth and signal-to-noise ratio (this is known as the Shannon Capacity).

Every type of channel has its unique challenges. Copper wires attenuate signal as they increase in frequency, so sending terabytes per second over miles of wire would require outrageous amounts of wire along with high power. Fiber optic cable, however, can handle large amounts of data, but it’s brittle, hard to install, and requires high precision transmitter and receiver hardware.

Wireless media are the most popular because of the lack of infrastructure required, however, latency — the time it takes for a transmitted signal to be received — can be high, and interference must be corrected for. Satellite communications are particularly susceptible to latency issues, and when we start talking about space travel, physics requires us to deal with minutes, hours, or even days of latency. Wireless systems also have to deal with cross-talk: the interference that occurs when multiple signals overlap due to reflections, latencies, and multiple transmitters. The more devices that share a wireless channel, the greater the effects of this type of noise.

MYTH #1: If you can detect a signal, you can decode it

I was recently on a panel about SETI (the Search for Extraterrestrial Intelligence) where we tackled the reality of what would happen if we found the needle in the haystack: a signal that stood out clearly from background noise. Even if the aliens were using the most basic code, i.e. signal on, then signal off, we’d end up with a sequence of ones and zeros. What do they mean? Without a codebook, they’re useless. Hopefully, if the aliens wanted to communicate, they’d send a repeating pattern rooted in basic mathematics. But if we received their equivalent of satellite TV, we might never decipher the content. 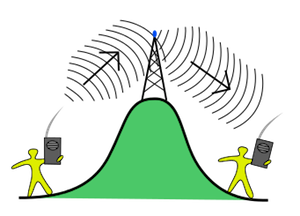 MYTH #2: All you need is a pair of walkie-talkies

The two-way radio communication on Earth works well because we have the frequencies tuned to our atmosphere and land mass. Radio, like light, is made of electromagnetic waves, which means it travels in a straight line forever unless something gets in the way. That thing could reflect, refract, diffract, or absorb some or all of the wave.

Sometimes this works in our favor. Our atmosphere reflects certain frequencies, which allows radio waves to bounce from one part of the planet to another. If your asteroid miner tries to use radio to communicate to a partner on the other side, they need to have one or more devices in orbit to relay that signal. Otherwise, no air, no bounce. And if an explorer on a new planet tries to use Earth-based radio, it may or may not work depending on the composition of that planet’s atmosphere. It gets even more complicated when you factor in solar radiation, ions, and temperature.

Electromagnetic signals get weaker as they travel through a medium. How fast depends on the physics of the medium and the frequency of the wave. In general, the higher the frequency, the faster the attenuation. The power of the signal also affects how far it can go before getting drowned out by noise. This means that not all wires are created equal, and a transmitter without sufficient power can’t communicate effectively, especially across long distances.

When science fiction has people wandering around with wireless virtual reality delivered into a brain implant, it often fails to consider how we’re going to implement this. Computer chips get hot. They burn a lot of power, especially when dealing with the noise cancellation requirements of high bandwidth wireless systems. While technology is continually improving power efficiency and battery life, the problem of heat dissipation is non-trivial, especially inside a warm body.

This relates back to Myth #1. Even with Earth-based, human-designed communication systems, unless you know what you’re looking for, you can’t decode it. Networking, both wired and wireless, runs on very specific protocols for this reason. While networking chips can support multiple flavors, you’ll still need different physical connectors for dealing with fiber optics, ethernet, DSL, WIFI, and cable modems. Some brands choose to use proprietary communication schemes that don’t interoperate with standard versions. If your hacker or spy is sniffing at network hardware, they need to have prior knowledge of the system to make sense of what they get.

For ground-based systems, you can safely assume that we’ll be upgrading wireless networking hardware to increase bandwidth over time. People also like the idea of avoiding costly infrastructure, like cell towers, so think flight. Balloon and drone based relays could deliver internet in tough terrain. Cube or nano satellite systems in lower orbits will reduce latency effects. Mesh networking — with WIFI points on every building — has proven a tough nut to crack, but it’s easy to believe as a science fictional concept. As the Internet of Things expands, every device could act as a potential hotspot or router.

For interplanetary communications, the near future is likely to see laser-based systems come online. If we’re going to colonize and communicate across the solar system, it’ll help to have satellites orbiting the sun in between the planets. Spaceships can also act as dynamic, asynchronous networking points, carrying signals as they travel. NASA is working on a protocol for a solar system internet using the concept of DTN, or Disruption Tolerant Networking. The Expanse is a recent science fiction example that depicts these constraints really well. 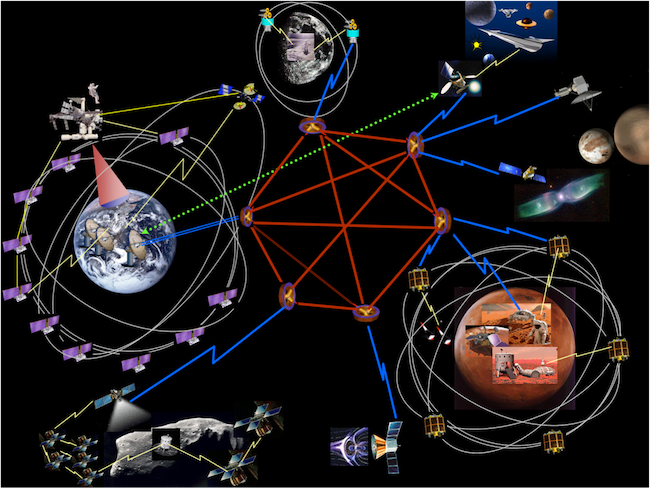 Schematic of the NASA DTN (NASA via wikipedia)

As for interstellar travel, everyone loves the idea of the ansible, a way to communicate faster than the speed of light. The best hope we have of that right now is quantum entanglement, which causes a pairs of atoms to affect each other’s state instantaneously. If we can figure out how to control one in a pair, we’d have a plausible invention of the ansible. Unfortunately, that doesn’t solve the fundamental problem of getting the receiver to another star, but that’s a space travel challenge, not a communication systems failure.