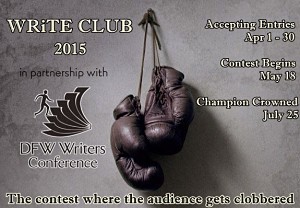 Last year at around this time, I entered a unique writing contest hosted by D.L. Hammons. It’s called WRiTE CLUB, and requires participants to submit 500-word pieces under a pen name. These submissions were screened by a panel of judges, and the top 32 chosen for sixteen head-to-head bouts. Victory was determined by votes, left as comments by the reading public. Given the anonymity, the voters only had the writing to go on.

Writing a 500-word piece wasn’t terribly difficult. To win NaNoWriMO, you need to write more than three times that every day for 30 days, and I’ve never lost. The challenge was making it a piece of writing that people might actually vote for. I went back and read some of the entries that had won bouts in the previous years. Humor played well, as did voicey first-person narrators.

Long story short, I went on to become the reigning WRiTE CLUB champion. If you’re up for it, you can read the complete chronicle of my WRiTE CLUB experience that I posted last year. Alas, my time with the title is nearing an end, because a new year of WRiTE CLUB is rapidly approaching. You should enter! Here’s why.

Why to Enter WRiTE CLUB

This contest is open to everyone. There’s no requirement (or cost) for entering. Here are a few reasons that you should:

Writing contests like these aren’t won by accident. Here are some tips that helped me do well last year, and might do the same for you:

When you’re ready, go to the Write Club 2015 page for entry instructions. Just make sure you enter by the deadline, which April 30th.