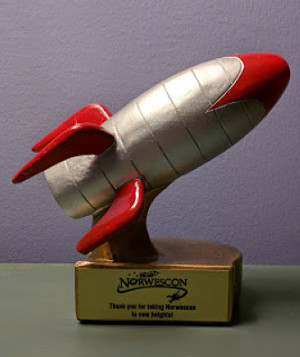 I’ve just returned from Norwescon 42 in Seattle, Washington, where I had the pleasure of serving as the Science Guest of Honor. It was my first experience as a GOH so I thought I’d share a little bit about the experience.

Norwescon is the most organized convention I’ve attended. They invited me in March 2018, more than a year in advance. Their invitation included:

I was also assigned a personal “handler” (volunteer), a very nice woman named Sarah who met me and my family at the baggage claim. She brought us to the hotel and made sure we had what we needed.

My first day was relatively light. I had a nice breakfast with the family, and then headed to the Pro Check-in room to pick up my registration packet and meet some of the volunteers. Side note: if you’re a panelist or invited guest, always go to the pro check-in. I got a special GOH badge, as did my wife and kids (another perk: family admission). I did my first panel that afternoon — Worldbuilding Through Biology — to get the ball rolling.

Then I did a Q&A with Jake McKinzie in which we talked science and bowhunting and everything in between. It was a ton of fun and the hour flew by.

That evening, there was a special banquet for con staff and the Guests of Honor. This was a lovely event with dinner, door prizes, and quiet conversation. I also had the opportunity to meet the other GOHs:

Meeting my fellow GOHs was absolutely a highlight of the con (and my career, if I’m being honest). Another was the unexpected delight that the ConCom gave us each an award, a little statue of a rocket. That’s right, I won a rocket!

A Day of Panels

Friday was my big day. I gave my headliner panel, the Science of Science Fiction, to a wonderfully receptive audience. The presentation itself was around 35 minutes, and I answered questions for the remainder. But that was just a warm-up. Early that afternoon, I joined four other scientists on the “Ask A Scientist” panel and we fielded any question the audience threw at us. It could have gone horribly awry but did not, thanks to an inquisitive and level-headed audience.

Later, I did a panel on Eugenics, Evolution, and Ethics which also produced a compelling discussion. I can’t say enough about the level of sophistication and thoughtfulness among Norwescon attendees. I was impressed.

A Night of Pomp and Ceremony

That night was a special reception for the GOHs and “lifetime” Norwescon members. It turns out that many, many people have given their time and energy to put on Norwescon over the years. The banquet led right into the Philip K. Dick Awards, which are given to works published as paperback originals in the United States. We got a reading from each of the nominated works; all of them were enormously entertaining.

That night there was a “pro party” in one of the suites on the penthouse level. I attended briefly but it was extremely loud/crowded. Plus, I had a meetup-breakfast early the next morning, so I didn’t stay long.

The University Bookstore (as in U-W) was the main bookseller of the con, and they were good enough to order a number of my books for the con. Even better, as a GOH I merited a special little display up front, which made my books very easy to find. 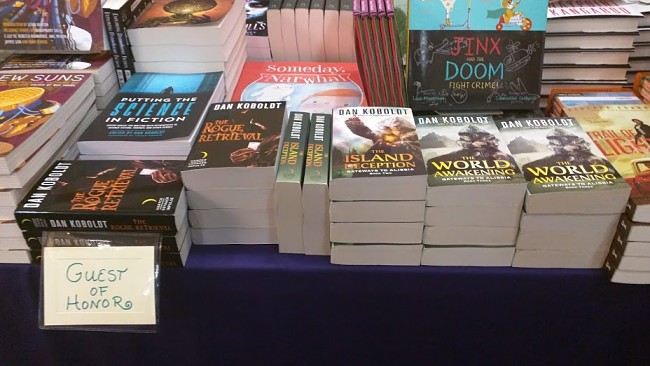 There was a two-hour autographing marathon, during which I got to spend some more time with the other GOHs and their various fans. A few people even came by and asked me to sign books, bags, and/or programs.

During the down time, we signed program covers for all of the Norwescon volunteers — probably more than 100 of them. Neil Clarke signed much faster than I did, and took particular delight in piling them up on my table. It was a delightful time, and was over too fast.

That night, I participated in a much-anticipated panel on “CRISPR Babies” — essentially, advances in human genome engineering and their application to viable embryos. Pat McEwen moderated while John Schlick and I got into the geeky science. It was an enjoyable panel, and hopefully an informative one.

After that I went next door for my reading session, during which I regaled the (modest) crowd with stories from my life in publishing, told a few jokes, and read from some of my books. I got the best response from my reading of The Triangle, which is set to release later this week from Serial Box.

Overall, it was a special honor and spectacular experience to be the Science Guest of Honor at Norwescon. I’m grateful to the organizers for having me out. Norwescon 43 will happen in April 2020. I hope you’ll check it out.