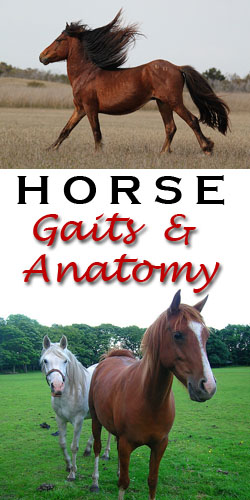 Amy McKenna is a biological scientist by training, and is here to share some of her horse expertise. She’s been riding for 20 years now and dipping her toes into everything from Endurance to Eventing to natural horsemanship. Amy is also an aspiring writer, though for now she writes for pleasure (her two publications are in science journals, not the fiction sphere). Her favorite genres are science fiction and fantasy.

This is the second of three #FactInFantasy posts that she’s written for us about getting horses right in fiction. Be sure to also check out her first one on how to describe horses.

Hello again, readers! I’m back for some more advice on horse terminology and use in novels. Today we’ll be discussing gaits and basic anatomy.

For this post I’ve included some pictures of my own horse, an 8 year old mare named Gwyn. If you recall my previous guest post with Dan (and if you explored the wikipedia page on coat color), you’ll see that she is an Appaloosa, broadly speaking. Specifically, she is a varnish roan leopard appaloosa. She is only ¼ appaloosa, however! She’s also ¼ Percheron, a draft horse breed commonly used as a driving horse and ½ Friesian. The Friesian is a horse breed most commonly idealized as the Knight in Shining Armor grand black horse with long flowing mane and tail.

Here we have Gwyn with a few labels. 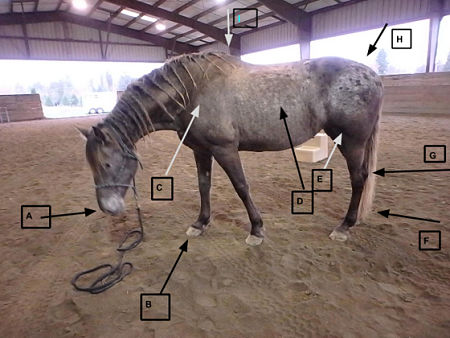 A: The nose, or muzzle. Unless a horse is trimmed for a show, there will be whiskers. Often very soft, especially when a horse has his winter coat.
B: The feet, or hooves. Singular – hoof. A horse can go with or without horse shoes. Gwyn has softer feet and does better with shoes on. She is wearing horseshoes in this picture, though it isn’t obvious.
C: The shoulder of the horse.
D: The barrel, or belly. If a horse is malnourished or filled with parasites, this is where you’d see their ribs quite prominently.
E: This is the knee of the horse. It is also called the stifle.
F: Tail. There is a bony length of the tail that comes down about a foot or so and the hair grows down from that.
G: The hock. This is equivalent to the human heel.
H: Butt. The point just under the arrow is the hip.
I: The withers and point at which the horse height is measured.

And here’s a close-up of the legs. 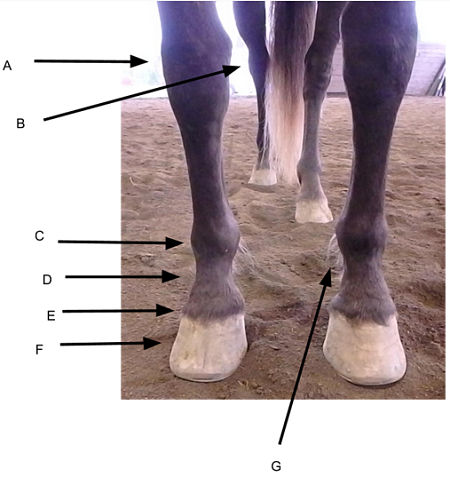 A: Knee
B: Hock (on the back leg)
C: Fetlock
D: Pastern
E: Coronet
F: Hoof
G: Feathers on the fetlock, the hair that hangs down. Some breeds have more feathering than others. Clydesdales have the classic, fully feathered legs while other breeds such as Arabians or Thoroughbreds have next to no feathering.

There are finer points of anatomy, as with all things, and easily found online. I think the ones I’ve included here are pieces that a writer would be more likely to need to describe.

The Hoof and Horseshoe 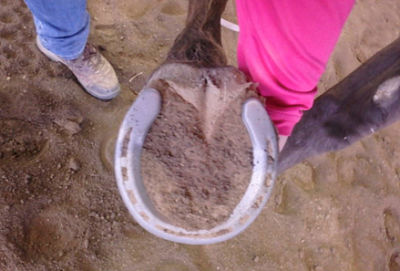 Here is a simple example of a dirt packed (my bad) hoof with a horse shoe attached. The v-shape you see at the top of the image is called the frog. The horse shoe is attached by small nails that are hammered into the outer hoof wall, which is basically a really thick fingernail and has no nerves. In Gwyn’s case, the horse shoes allow her to handle rocky and gravel ground without wearing her hooves down too short, which could cause her to become lame.

Hooves need to be cleaned out, as you can see, with a hoofpick. Under that dirt, there could be a stone that’s wedged against some softer tissue which could cause lameness issues and soreness. You also want to clean out the dirt and mud to prevent a condition called thrush, which is a fungal infection when the hoof stays wet for too long. I occasionally spray the bottom of her foot with diluted bleach to prevent thrush in the lovely, wet PNW environment we live in.

With few exceptions, the standard gaits a horse has are the walk, trot, canter and gallop, listed in order of increasing speed. Some breeds have more than these standard gaits. The four I have listed are the ones that are seen naturally in horses in the wild.

The walk is the slowest gait, averaging 4 mph (6.4 km/h). It is a four beat gait as only one foot leaves the ground at a time. It’s the easiest to ride and can be very smooth.

The trot is a 2 beat gait faster at an average 8 mph (13 km/h). However, there is a wider variation in the speed of a trot versus that of the walk, for example. Some breeds of quarter horses can trot as slow as a walk, this is called a jog. Other breeds, such as the harness racing Standardbred, can trot as fast as non-racers can gallop. And from experience riding such a Standardbred, it jostles you quite a bit as a rider! There’s a reason they use small racing carts called sulkies to go that fast. The Standardbred also has a variation gait called the pace, which is also 2 beat but the legs move parallel (right hind and right front move together) instead of diagonal in the trot (right hind and left front move together).

The canter is a 3 beat gait, generally faster than the trot. Average speed is 10-17 mph (16-27 km/h) depending on the horse. So a pony will be closer to 10 mph and a horse with a longer stride, such as a thoroughbred or arabian, will be nearer to the 17 mph end. Since the canter is not symmetrical, either front leg can ‘lead’ and that will change how the feet fall within the gait. While is this is getting into lots of detail, I mention it because if the hind legs are on a different lead than the front legs, the canter will not feel as smooth to the rider since the horse is unbalanced.

The gallop is the fastest gait, with speeds ranging from 25-30 mph (40-48 km/h). While this is an impressive speed, for the purposes of using horses as a means of travel, they cannot maintain that speed for more than a mile or two. Horses will get winded and some animals are more self preserving than others. I’ll share an anecdote.

On the first 25 mile endurance ride I took my mare on we were riding on nordic trails on a mountain. The trails were hilly but not steep, more rolling and gentler grades but sometimes those inclines lasted a long distance. We’d often build up momentum on the decline and start the incline at a canter. As we cantered up the path would curve around the mountain and when we reached the curve only to see more incline, my mare would just stop and walk. No amount of urging would keep her moving. She was tired and didn’t want to go while her buddy, a very fit Arabian bred for endurance was willing to just go and go and go. Once she’d rested, my horse was more than willing to pick up a trot again to catch up, but she needed that rest.

I share this to illustrate a few points. The first being that the personality of a horse can dictate how they handle travel over long distances or a flight out of town where the rider might be scared or want speed but the horse doesn’t have the motivation. In my anecdote, I wasn’t willing to fight her over being tired. It was the longest ride we’d ever done and I wanted to keep spirits and health up. So while a flight out of town is dramatic, the horse isn’t going to be galloping for long.

Secondly, fitness of the horse is also important. My mare was not used to the long distance I was expecting her to travel. I ride frequently, but I do not ride long distances frequently. My friend on the Arabian had been conditioning her horse for such a distance for a month and he was barely breaking a sweat on the ride. This means that a horse kept by nobility for casual riding or hunting might not be fit enough to maintain a faster pace over the course of a day in flight. In contrast, a horse used by messengers or even a horse used to haul carriages would definitely have the fitness to cover ground with less effort being expended.

Third, fitness of the rider is also very important. I mentioned how my friend was conditioning the Arabian for endurance. In doing so, she was also conditioning herself for hours in the saddle. It takes effort to ride and ride well. There is a lot of core muscle involvement as well as thighs and calves. You don’t just sit, you are an active participant. Even myself, riding for an hour a few times a week, found the 4 hours of intense riding at a constant trot and canter to be very tiring. My muscles screamed in pain about an hour in and my legs pretty much went numb. I thought I was going to fall off because I didn’t think that I could hold myself in the saddle. My friend, however, was fine. Her riding fitness was much greater than mine.

These are things that your characters could experience and they are worth considering as story elements to add a bit of realism. If your character has never ridden before and suddenly undertake a long journey, especially at a speed faster than a walk, you’re going to have physical effects.