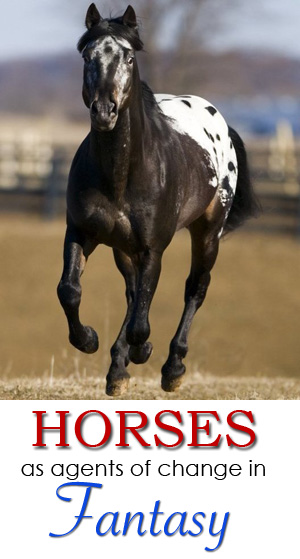 This article on horses in fantasy is part of the Science in Sci-fi, Fact in Fantasy blog series. Each week, we tackle one of the cultural, historical, or world-building aspects of fantasy with input from an expert. Please join the mailing list to be notified every time new content is posted.

Cordia Pearson has been a Society of Master Saddlers Qualified Saddlefitter for eighteen years, one of sixteen in the U.S. She and her husband run Avatar Morgans, named long before the movie came out. Among the horses they’ve bred is Avatar’s Jazzman, two time United States Grand Prix Pony Dressage Champion. Cordia will release Iridesce, Book One of “Given to the Wind” in 2021. You can find her on Twitter at @Morygnstar, on Instagram as morgynstar, Cordia Pearson on Facebook, or read more about Morgan Horses and saddling on www.saddlefitter.com.

Horses As Change Agents in Fantasy

Despite a big city childhood, I was horse obsessed. Lacking “horsey” parents, I improvised and ‘made’ a horse out of a broomstick, topped with a stuffed black sock, button eyes and flowing yarn forelock and mane.

Fast forward to the 8th grade when my father went from builder to freshman college student and battling the odds by becoming the oldest student ever accepted to the University of Missouri Medical School. We moved out of suburbia onto a wealthy landowner’s hundreds of acres of Missouri hills and streams, living in a rented two bedroom ‘hired hand’ sort of house. 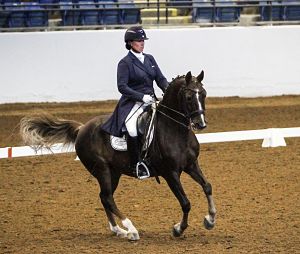 I disappeared into those hills, literally running wild, spending a great deal of time hanging over a neighboring horse farm’s fences, yearning for a horse of my own. When the son of the lady who owned our farm purchased a horse for his nieces and nephews (none of which could ride said horse), I was invited to try. I did, to the best of my limited abilities and dreamt of the day I’d have a horse of my own.

Fast forward to newly married and about to graduate from art college, only to discover I needed a single PE credit to get my degree. Outraged, (as a “grown-up”) I scanned pages of possibilities only to light upon: horseback riding. One credit became four, became a three-month-old Morgan colt sired by a World Champion stallion, which, of course, led to a truck, a farm, a barn and a hard right turn in my life.

As a writer, are you wondering how any of this backstory applies to horses in fantasy? Short answer: horses change people and the course of history. Rather than the artist I thought myself destined to be, I fell into the Alice-In-Wonderland of horses.

Why Does Anyone In Their Right Mind Want to Be Around Horses?

Humanity’s attraction to the equine species is fervent, irrational, and instinctual. A horse’s beauty, speed, majestic movement, size and power casts a spell over our kind. Unless with a machine, humanity isn’t as powerful as we are on the back of a horse. With skill in our seat and steel in our hands, we can and have brought kingdoms down. Yet, why would a prey animal put themselves between danger and their rider? The answer starts with a rider’s ethos.

A horse who is roped, hog-tied, saddled, then bucked out is broken, much as a conqueror breaks the spirit of an enemy, captive or slave. In enlightened human-horse relationships, when horses are treated as partners, the magic begins.

Think of the Fantasy horse greats you’ve seen on the screen or read about in books, such as Goliath and Navarre in Ladyhawke. I lost any control the first time I saw Goliath gallop up a mountain with 6’ 1” Rutger Hauer tall in the saddle. (Hauer was an accomplished horseman. For a delightful bit of backstory about the film: http://bit.ly/2KN3YgR

Goliath and Navarre’s relationship did not arise from barbarity. To ride well and ‘be one’ with a horse, takes seminal self-examination of each rider’s values. The type who views other living creatures as a “lower” life form, (put on the planet for their use) are the cruelest and harshest of riders (aka, the villain. Their attitude about horses can go far in showing the reader how awful they are.)

Back to the light. Some qualities a great rider or trainer needs are:

There are few limits to what a horse will do for an enlightened rider. The bond between horse and human is such that writers are only limited by their imagination when creating this friendship.

Horses as Agents of Change

Horses change people, history, society and culture. Rather than rehashing stories you know, such as Shadowfax and Gandalf in Lord of the Rings, I pulled a few favorites off my shelves.

The Valiant by Lesley Livingston 2017

This richly imagined historical fantasy features derring-do chariot races. Lesley graciously offered an hour of her time to discuss growing up horse-crazed on the prairies of Canada. She too wanted to ride from early on and got her first opportunity on unbroken renegades. In her words, “I threw myself on and they threw me off.” When asked about how she created The Valiant’s magnificent chariot racing scenes, she began with Caesar’s admiration of the Celts he fought in Britain, then went forward from there. If you haven’t read Lesley, I urge you to do so.

Range of Ghosts by Elizabeth Bear 2012

The first time I read ROG, I knew this was the work of the “horse afflicted.” Tenmur and Bansh’s relationship resonates with what a riding reader seeks. Having spoken with Elizabeth at 4th Street Fantasy conferences, I reached out and asked how she managed such veracity. Turns out she worked in a stable during college and read many horse and dog books as a child. So, when she wrote ROG, she was not the horse owner she is today, but boy did she get it right!

The Beast Master by Andre Norton 1959

I was a Norton junkie as a kid, and this librarian/novelist had a huge impact on my becoming a writer. In Beast Master, Hosteen Storm, an ex-Terran Dineh scout, relocates to the planet Arzor after the earth’s destruction. Upon arriving with his genetically altered eagle and two meerkats, he hooks up with a horse trader. The scene where he ‘gentles’ the untrained stallion he names Rain-On-Dust is purest horse fantasy and a joy. If you haven’t read the lady for which the Andre Norton Nebula Award was created, perhaps now’s the time.

The Virtues of War by Steven Pressfield 2005

Steven digs deep into his imaginings of the relationship between Bucephalus and Alexander the Great. Mind you, this is a man who does not ride, yet came up with lines like: “A horse must be a bit mad to be a good cavalry mount, and its rider must be completely so.” Stephen researched extensively, immersing himself completely, thus convinced me he knew horses. He was kind enough to respond when I asked him about his research. “I read a bunch of cavalry books. One by Xenophon, one about Frederick the Great, also a wonderful book, The Memoirs of Baron Marbot. And then I used my imagination.” I also know from reading his blog, a Grand Prix Dressage beta reader helped make the book read “real.”’

How I Write Horses in Fantasy

The short answer is, I keep them real. Horse people are an anachronism in this millennium, numbering about 2 million 0n a planet of 7.64 billion. Yet the horse continues to have a hold on the human heart.

Having spent the better part of my life seeking to be a better rider, I don’t write peasants who go from yoked to a plow to expert on the back of a horse and able to bring down an evil warlord. Craft your characters’ backgrounds with care if they will be riders.

Fact: horses are lightning fast and equally unpredictable as prey animals on many menus. Sudden, unexpected noises, something not in their environment a moment before, and they can leave (literally right over the top of you).

Fact: warhorses (think the White Stallions of Vienna) take years to train. In whatever world you’ve created, this makes them a prized, valuable commodity. Alexander the Great’s Bucephalus was purchased for the rough equivalent of $156,000. A Greek hoplite earned about $52 a day. Could he afford a horse? Unlikely.

Fact: horses have big personalities, layered as a dog or cat. While one horse may not care whether you live or die, (so long as you feed them) another will trust you to walk them out of a forest fire. My husband and I led two of our Morgan stallions through one such a conflagration. The senior stallion let the two-year-old colt huddle close for miles. While on the topic of stallions, there’s a reason the Spanish Riding School uses studs. Once bonded to their rider, they are, hands down, the best partner any warrior could have. Mares are, um, a tad independent (and opinionated) which could work well as a change agent in fiction!

So, if you want your fantastic fictive horse to be famous as Shadowfax, heed all the above. Feel free to comment below or share your own horse stories!