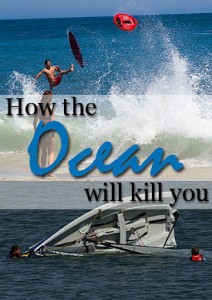 Danna Staaf has a Ph.D. in marine biology and works as a freelance science writer. She also writes science fiction and fantasy for adults and children, and has a special fondness for squid. You should follow her on Twitter.

How The Ocean Will Kill You, and Other Salty Truths

The ocean covers 71% of our planet and probably leaks into at least that much of our collective psyche. You can’t dip your toe in a tidepool without getting bitten by symbolism. The depths of the sea are humanity’s unconscious; maritime weather is fickle fate; fish represent Jesus; and the white whale—well, we all know about him.

The immense popularity of these last two titles, however, has contributed to one of the most common misconceptions about the ocean among readers and writers alike.

The ocean can kill you, but probably not the way you think.

When they hear that the ocean is dangerous, most people think of great white sharks, giant squid, maybe even sea serpents. But the most dangerous thing in the ocean is actually . . . water. Because you can’t breathe it.

In the US, about 3500 people die every year by drowning, and half of these occur in what the CDC calls “natural water” settings: the ocean, lakes and rivers. Compare 1750 annual deaths by natural water to less than one by shark (some years there are no fatal shark attacks) and zero by squid (there’s never been a confirmed fatal squid attack).

That’s why real people who work or play in the ocean, like divers and sailors and surfers, take safety seriously and focus primarily on the risks of drowning and exposure. Fictional characters should do the same. The Law of Conservation of Detail may prevent you from waxing lyrical about your kayaking protagonist’s life jacket, but at least you can make sure your divers follow the buddy system.

On the flip side, if you do want to hurt or kill a character in the ocean, it’s tragically easy to find inspiration in real headlines. Operating a boat under the influence. Night swimming alone. Ignoring the dive computer’s warnings.

But I know, I know. Sometimes you just have to threaten your characters with a deadly animal. In that case, may I suggest a cone snail or a blue-ringed octopus?

Most of the animals in the ocean are not whales, dolphins, or fish.

Or even (as much as it pains me to admit it) giant squid. In fact, the ocean is Earth’s premier showcase for the sheer diversity of animal life. It’s got dancing flatworms, sea cucumbers that breathe through their anuses, sailing jellyfish, octopuses that dress up like shrimp, shrimp that can break your thumb faster than you can blink . . . I could go on.

Most of these creatures are invertebrates, animals without a backbone. And some are truly bizarre. In college, my invertebrate zoology professor said that if he had to pick a group of animals that came from outer space, it would be the echinoderms (starfish, sea urchins, and sea cucumbers). Instead of having a left and right side like we’re used to, they have five-pointed symmetry. Instead of a proper circulatory system, they pump raw seawater through their bodies, using the pressure of the water to move their feet. They can regenerate their arms and even their guts. Aliens among us, indeed.

In fact, many writers have drawn inspiration from this realm for creating alien or fantasy life forms. (Writing Outside the Human Box tackled this topic in excellent detail). Marine invertebrates offer an almost endless diversity of shapes, forms and behaviors to stir the imagination.

But if you’re not inventing new species or traumatizing your readers, if you’re just writing a few boat scenes or a romantic walk on the beach, do you really need to know about all this biodiversity? Plenty of people who live in coastal towns never see much more than seagulls and the occasional whale. However, it’s worth remembering that today’s ocean is the product of centuries of overfishing.

The ocean we’re used to is unnaturally empty

Are you writing historical fiction or creating a fantasy/alternate world? Try filling the oceans brimful with turtles and fish twice the size of a person. Pack in the whales like sardines. Consider reading accounts of historical abundance, like this passage from the memoir Two Years Before the Mast, in the year 1834:

We were surrounded far and near by shoals of sluggish whales and grampuses, which the fog prevented our seeing, rising slowly to the surface, or perhaps lying out at length, heaving out those lazy, deep, and long-drawn breathings which give such an impression of supineness and strength. . . . I stood leaning over the bulwarks, listening to the slow breathings of the mighty creatures—now one breaking the water just alongside, whose black body I almost fancied I could see through the fog; and again another, which I could just hear in the distance—until the low and regular swell seemed like the heaving of the ocean’s might bosom to the sound of its own heavy and long-drawn respirations.

On the other hand, are you writing about the future? Consider that whales may become wholly extinct, as in the charmingly cheesy Star Trek IV: The Voyage Home. Sad to say, it’s also reasonable to speculate that we may lose all the coral reefs, sea turtles, and sea birds.

We often think of the ocean as powerful and dangerous. It is. But at the same time, many marine animals and ecosystems are fragile and endangered. To incorporate both aspects in our writing is to give to the sea what we try to give to all of our characters—depth.