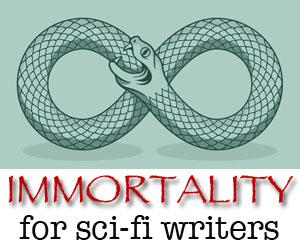 This article on immortality in science fiction is part of the Science in Sci-fi, Fact in Fantasy blog series. Each week, we tackle one of the scientific or technological concepts pervasive in sci-fi (space travel, genetic engineering, artificial intelligence, etc.) with input from an expert. Please join the mailing list to be notified every time new content is posted.

Edward Ashton is a clinical scientist specializing in the development of novel cancer therapies. He has worked in the past for both large and small research organizations, as well as putting in a stint with a mysterious and vaguely threatening government agency. He is also the author of the novels Three Days in April and The End of Ordinary, as well as a great deal of short fiction. You can find him online at edwardashton.com.

Immortality has always been a popular topic of discussion for us humans, and it’s a staple of a certain brand of science fiction story. One of the major downsides of our big-ass brains, aside from what they do to our mothers during the birthing process, is that they allow us to imagine the future. While this is useful when it helps us to anticipate and avoid a visit from the in-laws, it is much less so when it allows us to anticipate our own deaths. Consequently, despite the sound advice of moral philosophers like Socrates and Blue Oyster Cult, we’ve spent a great deal of time and effort trying to imagine ways to cheat the reaper.

Some of these efforts have been dumber than others. Qin Shi Huang, the first emperor of a united China, was so terrified of death that he turned the efforts of all of his court scholars toward developing elixirs of immortality, executing those who failed to come up with anything useful. He eventually died after ingesting mercury pills. These were supposedly intended to make him live forever, but after all the executions, it’s hard not to wonder whether the alchemist who provided them to him might not have known exactly what he was doing.

Later, less amusing efforts at extending the human lifespan included those of Elizabeth Bathory, who spent the early years of the seventeenth century bathing in the blood of virgins, eventually torturing and killing as many as 600 peasant women. This didn’t actually make her immortal, though it did result in her spending the last three and a half years of her life walled up in a lightless room—which, come to think of it, probably seemed to her like an eternity. On a positive note, her story reputedly helped to inspire Bram Stoker, later leading to one decent book, several crappy movies, and one awesome Sesame Street character.

Modern efforts toward immortality tend less toward elixirs and virgins and more toward robotics and nanotech. Ray Kurzweil, for example, has argued that we are rapidly approaching the point at which it will be possible to replicate our minds in software, which he believes will provide a form of immortality. He has apparently gone to Qin Shi Huang – like lengths to try to keep himself alive until we actually get there, ingesting alkaline water, red wine, and hundreds of pills daily in order to “reprogram his biochemistry.” Kurzweil is undoubtedly a brilliant man, and I guess we don’t know for sure yet that he hasn’t found the key to eternal life. Based on history, however, I wouldn’t hold my breath.

So, is immortality even theoretically possible? Could some combination of new medical technology, robotics, mercury pills and virgin blood lead to a world free from death? Anything is possible, right?

No, this particular thing is not possible.

To understand why, we need to remember that, while most of our body essentially regenerates itself over and over again throughout our lives—your skeleton, for example, is completely replaced on a cellular level every ten years or so—our neural system does not. Unfortunately, it’s our neural system that we’re really concerned with preserving, since that’s where the part of us that we actually think of as “us” resides. Even if we figured out a way to prevent our body cells from senescing without becoming cancerous, our brains would eventually rot away.

But wait, we could still figure out a way to keep our neurons from dying, right?

No, even if we could figure out a way to completely shut down the aging process on a cellular level, the constant bombardment of cosmic rays and other background radiation would kill off our neurons one by one, dooming us to a slow mental decline, and ultimately to death. How fast this would occur would depend on a number of factors, including how often you fly and how high above sea level you live, but the outside limit is probably around 300 years. That’s a big bump over what we get now, of course, but it’s hardly immortality. 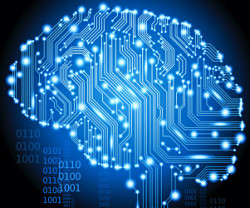 Okay, so the bodies and brains we’re in now are irreducibly impermanent. What about Kurzweil’s big idea? Will we eventually be able to upload ourselves onto a server somewhere? Here, we get into a bit of a philosophical discussion. What does it mean to be you? Imagine that we eventually develop hardware and software sophisticated enough to completely contain a human mind, and that we figure out a way to upload you. Your brain goes through the magical scanner, and your laptop starts speaking in your voice. Are you immortal now? Is that really you?

Here’s the affirmative argument: Imagine that when you go to sleep tonight, you don’t just go to sleep. You die. You die, and someone else wakes up in your body tomorrow. He has all your memories, all your hopes and dreams, and he thinks he’s you—but he’s not. He goes through his day, then lays down in your bed and dies in his turn, only to be replaced the next morning by the next soul in line. Question: would this make any difference at all in your life? Is there any way you’d even be able to tell? Go ahead and upload yourself into the computer system, then go outside and stick your head in a wood chipper. You’re immortal.

Here’s the negative argument: I don’t care how much my laptop thinks it’s me. I’m not sticking my head in a wood chipper. I guess you can see where I stand.

So, what would my advice be to seekers of immortality? Every day you have on this earth is a near-miraculous gift, and it’s churlish to complain if you don’t get to have quite as many of them as you think you deserve.