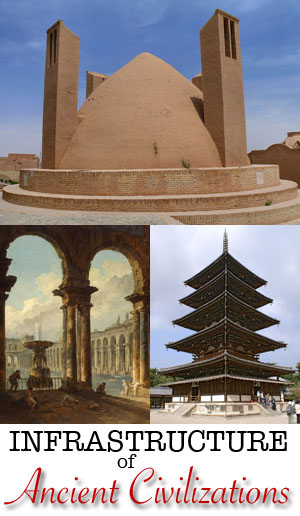 This article on infrastructure of ancient civilizations is part of the Science in Sci-fi, Fact in Fantasy blog series. Each week, we tackle one of the cultural, historical, or world-building aspects of fantasy with input from an expert. Please join the mailing list to be notified every time new content is posted.

Eleanor Konik studied ancient philosophy and religion before heading off to law school. After experiencing the joys of graduating law school into a global recession, she landed on her feet as a world history teacher. When she’s not busy entertaining her infant son, she writes books that bring ancient history — and magic — to life. She blogs about ancient civilizations and mythology and enjoys discussing history and folklore on Twitter.

Beyond Rome: Infrastructure in Ancient Civilizations

There’s an idea floating around that roads, aqueducts, and other large-scale civil engineering projects required Roman-era engineering. This is a false narrative. A fantasy world doesn’t need iron-age technology to create impressive infrastructure.  The development of technology is not nearly as linear and filled with prerequisites as games like Civilization VI would have us believe. 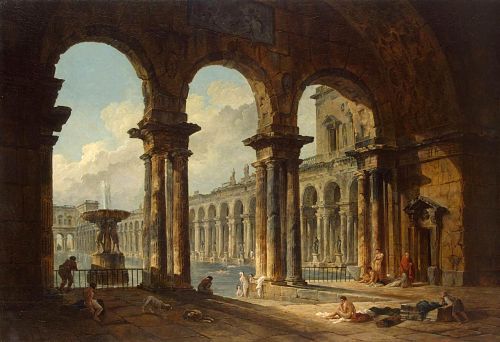 The wheel is not actually a prerequisite for public baths.

The Incas had running water and an impressive series of public water fountains, but they never really used wheels and barely bothered with bronze. The Erlitou of the Yellow River valley 3,500 years ago had bronze-age technology and their cities had underground sewer pipes.

Roman roads are so impressive that modern European highways often trace their paths, and in many places, they still exist despite the Medieval lack of maintenance. It’s not technology that made them worth building, though. It was politics.

Specifically, the size and scope of the Empire required impressive, straight roads that allowed for the fast movement of military units and efficient supply chains. Even with modern technology, roads are expensive and difficult to build and maintain, so nobody is going to bother unless the highway is able to offer something worthwhile.

Incan roads — which were begun by other Andean civilizations at least 3,000 years ago — were as straight as their Roman counterparts. They spanned valleys with suspension bridges that are still functional today. They had retaining walls, tunnels, and drainage canals, and the Andean civilizations built tens of thousands of miles of roads 10,000+ feet above sea level — without iron tools, draft animals, wheels, or arches. 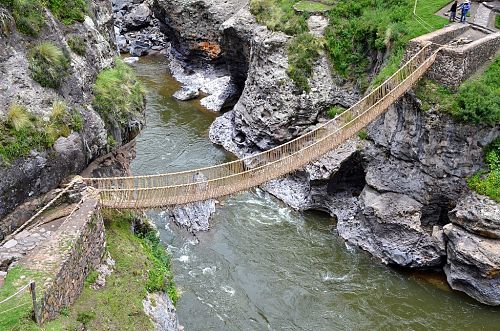 Suspension bridges in the Andes are no joke.

There’s nothing special about the technology required to dig a trench and fill it with rocks of varying sizes and materials. The Romans altered their road design depending on the materials available in the surrounding area. It’s strong government that’s key to impressive road infrastructure. You need a motivated, powerful leadership to arrange the taxes or tithes necessary to pay for maintenance. You need sufficient trade connections or military endeavors to make this kind of infrastructure in ancient civilizations worthwhile. Basically by definition, most civilizations have those to some degree.

Rulers in the Indus Valley built their roads out of brick.  Roads connecting Mesopotamia and Egypt were paved with stone. Shulgi of Ur used roads to knit together a network of alliances and trade under his influence. Sumerians used mud brick and proto-asphalt called bitumen 5,000 years ago.

You need political willpower to build and maintain roads. That’s it. Everything else is just reacting to geography and material availability.

The Romans were known for their arches. Arches are definitely useful. They allow engineers to span longer spaces than a horizontal slab. Arches also allow for better weight support because they distribute weight downward toward the ground.

The Coliseum is basically nothing but arches

But the innovations necessary to allow for such a large structure are pretty straightforward. Concrete and rebar aren’t necessary until you get into the realm of stupendously tall buildings, which tend not to last no matter how advanced the technology. The Colosseum itself was crafted from stone. Besides, the Romans didn’t invent arches. The ancient Sumerians used arches over 4,000 years ago. The Biblical Canaanites (who were also, incidentally, the Phoenicians who founded Carthage) had an arched gate guarding the entrance to the city of Ashkelon in 1850 BCE, a thousand years before the founding of Rome.

“Wooden” is not synonymous with “primitive.” Japanese builders created this five-story pagoda during the 7th century. It is one of the oldest wooden buildings in the world.

It’s standardization and a large workforce that are key to being able to build such impressively large structures.

Sumerian ziggurats were enormous brick complexes; the great ziggurat at Ur was 150 feet wide, 210 feet long and over 100 feet high. Ancient priests, like their Medieval counterparts, created public works infrastructure projects to keep the populace productive and employed.  The Mayan site of Copan is 30 meters tall, equivalent to 9 storeys. Ancient chinese pagodas were protected from earthquakes by the particular cleverness of their wooden construction; the suitability of a building material isn’t a function of a technological “march of progress” either.

“Wooden” is not synonymous with “primitive.” Japanese builders created this five-story pagoda during the 7th century. It is one of the oldest wooden buildings in the world.

You didn’t even have to be an ancient priest to live in an impressive building. Ancient Egyptian farmers lived in houses very similar to their modern-day counterparts, with two-storey brick or stone buildings that sometimes even boasted indoor plumbing. The next time you’re worried about whether your fantasy civilization could really have huge buildings, remember: academics even claim that cities predate agriculture.

The city of Jericho, quite possibly the oldest continuously inhabited city in the world, dates back over 10,000 years. Located in modern-day Palestine, the creation of its stone fortifications predate the invention of pottery. Its tower was 27 feet high. The wall surrounded a town of about six acres. So if you were worried that having a wall in your novel would require a feudal society, with knights and lords — don’t be.

Heck, walls even predate settlements. 10,000 years ago in the Eastern Mediterranean coastal region (aka the Levant), organized groups of hunter-gatherers sometimes built huge stone enclosures, called “kites.” These funnel-shaped walls were sometimes up to 35 miles long and allowed hunters to slaughter up to 500 animals at a time. 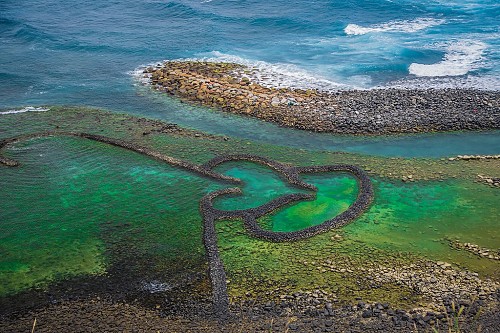 Kites function like fish weirs, which can be used to channel fish to a particular location and themselves predate modern humans.

Groups of hunters stampede herds of animals, such as gazelles or ostriches, through a bottleneck. It’s not just walls that the ancient hunter-gatherers built; some kites have ramps, stone-lined pits, and cells to restrict jumping. Kites represent a huge undertaking that proves you don’t need ironworks or even cities to collaborate on infrastructure in ancient civilizations.

I mentioned earlier that the reasonably well-off ancient Egyptian farmers had indoor plumbing. Despite the common belief that until indoor plumbing is a super-modern invention that came about because of germ theory, showers were invented in Greece.

Lest you think that their showers don’t count because they didn’t have mechanized pumps and used gravity-powered aqueducts, I offer the reminder that Americans utilize gravity to shower, too. In most of the ways that count, infrastructure in ancient civilizations wasn’t as different from our own as we might think.

Most Americans have seen the big, blue, bulb-shaped water towers in cities, but water towers are common atop apartments, too. Who doesn’t love that sweet, sweet water pressure?

Besides, water pumps existed in ancient times, too. Although almost every casual pop-science source online insists that the Greek scientist Archimedes invented the screw pump around 200 BCE, water-lifting devices of various complexity are actually really common throughout history. Water screws themselves were probably in use in Mesopotamia centuries before Archimedes diagrammed them. People used them as bilge pumps, to pull water out of mines, and drain swamps.

With regards to aqueducts, the term refers to any system of canals, pipes, bridges, ditches, etc., that get water from a source to a destination. Whether for irrigation or indoor plumbing, aqueducts are super useful.

They definitely predate Rome, though, even if you only count the fancy kind that move water for miles overland and involve either tunnels or bridges. One reason this gets overlooked is because when historians and archaeologists talk about Middle Eastern aqueducts, they call them qanāts — like in Frank Herbert’s Dune. Qanāts were probably invented in Persia 3,000 years ago.

There are technical differences between Roman aqueducts and Persian qanāts, of course, but they mostly have to do with geography. 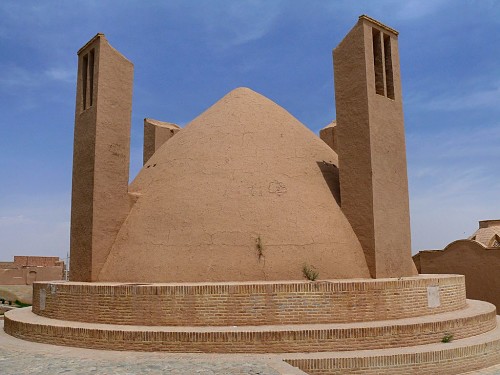 In Mesoamerica, aqueducts are called puquios. Though scientists don’t know just how old they are, they’re definitely pre-Columbian, and Mesoamerican societies barely used bronze. Puquios allowed communities to get water during times of drought, and from a scientific perspective, they’re even more impressive than gravity-powered aqueducts. Puquios are powered by wind. The desert-dwelling Nazca people created complex spiral-shaped holes that pushed water from subterranean reservoirs into underground canals. The puquios system required a staggering amount of geological knowledge.

Remember: impressive infrastructure in ancient civilizations didn’t require fancy technology. Large groups of people, organized and working together to a common purpose, can build basically anything. Despite what pop culture implies, infrastructure doesn’t require slavery, either.

But whatever your fantasy civilization manages to build, remember: it’ll probably wind up covered in graffiti.