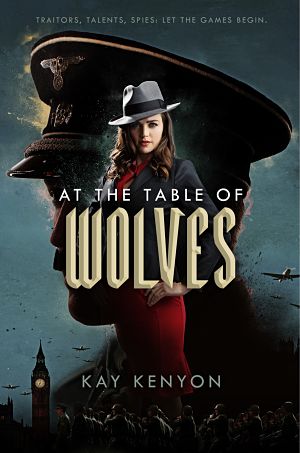 I’m thrilled to host an interview with author and reviewer Kay Kenyon. Her writing pedigree is too long to list here, but it includes numerous short stories and more than a dozen novels. Talk about someone who’s had an inside view of the changing SF/F industry: her debut novel was published by Bantam/Spectra in 1997!

British spy-fi novel At the Table of Wolves, Kay’s latest book, was just published by the relatively new S&S imprint, Saga Press. In celebration, she was good enough to share some of her thoughts on writing, reviewing, and publishing SF/F over the past twenty years.

Your debut novel, The Seeds of Time, was published in 1997. What did your writing journey look like back then? How did you break in?

I remember two main things about that book. First, my then-agent peddled hard trying to sell The Seeds of Time, but it was taking forever. While he was marketing it, I wrote the sequel, and proudly handed it in to him. His response: Wha? Never, never write a sequel to a book I can’t sell! I was crushed.

Then he came up with an idea. Big fantasies were selling hot at that time, and he suggested I put the two books together, thereby making it look important, or at least heavy. It sold quickly. (But some of the major characters got killed off smack dab in the middle. No one ever noticed that the book was really a two-fer.) The second thing I remember was the horrid complexity of writing a time travel novel with lots of zipping around the time-continuum. I swore I’d never do it again, and I haven’t.

As for my journey, that too seemed to take forever. It was a years-long process to write my first book, find an agent and sell it to a publisher. Some writers sell their first novel quickly, which I find highly annoying!

How has the SF/F genre changed since then?

I’m amazed by what’s gone on in the last 20 years. Science fiction and fantasy have grown out of the ghetto, boosted by the success of books like Harry Potter, Twilight, and Game of Thrones. Hundreds of new authors started furiously copying the major tropes of these books, and the audience grew apace.

Then, as the field began to look predictable, authors looked for ways to reinvigorate the fantasy genre with mash-ups and experiments. It even became less relevant to separate SF from fantasy. The days are truly over when it comes to rigidly defined subgenres. Anything goes–if you can make it work.

Your blog at kaykenyon.com has some excellent posts on world building. What’s the best advice you’d offer on this topic to aspiring SF/F authors?

Strike a balance between SF/F traditions–power chords–and the unexpected–the weird, the original. Readers are looking for the next new thing, but they aren’t handing out gold stars for fresh concept alone. They want to be grounded in something familiar.

I’m fascinated by the fact that you’re both an author and a book reviewer. Does your experience wearing one hat change your outlook on the other?

As an author, and remembering how tough it’s been to receive the occasional bad review for a book, I just won’t pan a novel. If I dislike a book, I won’t review it, period. Other than that, I think the more books you’ve written, the more analytical you become and the more natural reviewing comes to you. You know the strategies the author is using, you see them plainly, and notice the development of this or that tactic–or the lack thereof.

Speaking of reviews, you got a nice one in Publishers Weekly for your forthcoming novel (At the Table of Wolves). What was that like?

There’s always relief when a reviewer likes your novel. Because if they don’t “get” your story, there is that yucky review out there for all the world to see. As for Publishers Weekly: The brass ring is to land a starred review. It was really a thrill when At the Table of Wolves received one last month. The reviewer used words/phrases like “compelling” and “smoldering prewar scene,” and “a superb adventure.” Not that I have them memorized! Authors should try not to put too much stock in high praise (because the obverse is that you have to believe the lousy reviews, too) but then, why not celebrate?

Your book takes place in a fascinating era (pre-WWII). I’m sure that involved extensive research. What was one of the most fascinating things you learned about it?

The 1930s – and particularly in England – was a period overshadowed by the catastrophic losses of World War I. Talk about a back story! I mined this historical context in two ways. First, my major character lost her beloved brother in the war, and ever afterward feels a responsibility to live up to his courage and sacrifice.

Secondly, the political context is fascinating. In 1936 the British were exhausted and nearly every family was still grieving deeply personal losses. People didn’t want to believe it could happen again, that Hitler would bring war to their European doorstep. In hindsight, this attitude was understandable, but ultimately ruinous. These currents of war, grief and fear caused deep divides of public opinion, and set up my story where combating fascism is relegated to the shadow world of espionage.

Saga Press is one of the newer major SF/F imprints. What’s your experience been like working with them? How does it differ from, say, Bantam/Spectra back in the day?

As an imprint of Simon & Schuster, Saga has all the go-power of a major publisher. Also, right out of the gate they had a dynamite team, with deep experience in SFF: Joe Monti and Navah Wolfe. But, the imprint being relatively new, they’ve demonstrated a fresh willingness to publish new authors and works that expand the genre.

One big similarity between the two publishers that you mention, is that in regard to my editors, both Navah Wolfe and Anne Groell have been hands-on editors who work very closely on editorial issues with authors. I think that’s a huge strength for a publisher; I know some authors would rather have a light touch in that regard, but it can result in an inspired collaboration. 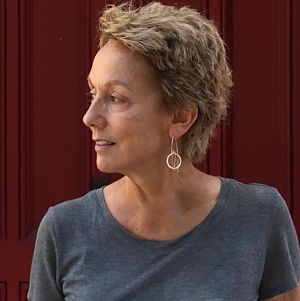 What are your plans for the near future, writing-wise?

I’m working on the sequel to At the Table of Wolves, a book entitled Serpent in the Heather. It will come out in April, 2018, and continues the saga of Kim Tavistock as an intelligence agent combating Nazis and dark powers. I’m hoping to have a third book in the series, but in any case I have plans for several additional fantasy novels but I can’t quite decide what comes next!

Kay Kenyon is the author of thirteen science fiction and fantasy novels as well as numerous short stories. Her work has been shortlisted for the Philip K. Dick and the John W. Campbell Memorial Awards, and twice for the American Library Association Reading List awards.

You can find her on twitter @KayKenyon and at www.kaykenyon.com. Also, be sure to check out At the Table of Wolves on Simon & Schuster or Amazon.