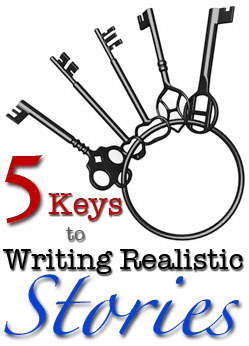 Today I have a guest post from my #PitchWars alternate, Amy Cavenaugh. Her manuscript A SCARRED MIND is one of the best thrillers I’ve read. Here’s the pitch:

Reluctant psychic Jake never wanted attention brought to his real identity. But visions of a new client’s brutal murder force him to divulge his secret to the police. When his plan backfires, not only does he become the prime suspect, everything he holds dear becomes the target of a sadistic killer.

You should go read her first 250 words at the Pitch Wars showcase (it’s #5, Adult category). I finished the ENTIRE book in one sitting, on my plane ride to Finland this summer. I haven’t had that experience since Harry Potter and the Sorceror’s Stone.

Even though she’s not (yet) a published author, she handles pace and dialogue as well as any writer I’ve read. So I asked her to come and share some tips about writing craft.

5 Keys to Writing a Realistic Story

When Dan invited me to write a guest blog, I was thrilled! (Thanks again, Dan) And then I wondered what the heck to talk about. Since I’m not a published or agented author, it’s sometimes hard to know if anyone is looking for my advice. Maybe since Dan picked me as his alternate in #PitchWars, I can use some of that clout. 😉 I may not be those things (yet) but I have learned A LOT since deciding to make a go of this whole writing thing.

I’m here to talk about creating realness in your manuscript. Obviously, I’m not a fantasy author. I prefer real world scenarios, something that might actually happen. I want characters that you might bump into on the street. If you’re into the same kind of thing, then I do have advice for you. Keep it real. It really is that simple. At least it is for me. Of course it took me four complete rewrites and thousands of revisions to get it there but…anyway.

Here’s what works for me:

That means writing about areas that you know, that you’ve actually been to and spent time in, if it’s not where you live. For example, I set my story in Wilmington, NC. I don’t live there now, but I did for several years and was born there. I still visit as often as I can and know the area very well. If you’re writing about a fictional place, even if it’s in another time, I think it’s a good idea to include aspects of a real town/city/village/whatever. Like Veronica Roth did with the DIVERGENT series. It’s a completely different Chicago, but still includes recognizable landmarks. You want readers to recognize things in your work so they can relate.

2. Listen to the way people talk.

I’ve always thought one of my strongest assets was the ability to write dialogue. This is why I used to write screenplays. It’s also why my characters swear a lot. Because the people I know cuss. 😉 I like throwing in some of the little Southern things the country at large may not get. To me, it makes the story more real. But don’t do it so much that no one else can understand what’s being said.

3. Base characters on real people.

This goes back to what I was saying about the setting: make it real. I’ve found that it helps to model my characters after real people. With my thriller A SCARRED MIND, the main character was written specifically for a certain actor, someone I admire very much and have had the pleasure to meet multiple times. Maybe this isn’t true for everyone, but it definitely helps to have an actor in mind if your book were someday made into a movie. Yes, I know how unlikely it is to happen but it helps.

And if not an actor, obviously it works even better to base characters on real people that you know. If they seem like a real person, a reader is more likely to connect with them. At least that’s my theory and the way I write. I realize a lot of readers may want to escape and read about some perfect guy/girl. That’s fine for them, but those are the books I don’t even pick up in the store or scroll right past online.

4. Observe people and the way they interact.

Body language is a great tool in writing for showing and not telling. I’ve always been a quiet person who listens more than talks. I think this has made me a stronger writer. I’ve worked in retail and the people-watching you can do there has taught me a lot. That old saying about actions speaking louder than words is often true, even in writing. Yes, you’re describing the actions with words but y’all know what I mean, right? Instead of saying someone is pissed, mention how their arms are crossed, face flushing, lips pursed. You get the gist.

5. Give your character friends.

This may make you say “Duh!” but this is a mistake I made in previous drafts of A SCARRED MIND. My MC had no friends. He did, actually, but I didn’t write about them. I kept getting the feedback that readers couldn’t relate to him, that there was a disconnect. Giving him a best friend changed everything. Now he has someone he can go to in times of need, someone to say “You’re not crazy” and even more often, “Yeah, you screwed up.” And I don’t mean throw in a token gay best friend. That could very quickly become cliché. Unless of course, your best friend really is gay.

I’d say to base the person on your real life best friend, or at least the best friend of someone you know. It really does make a huge difference. Trust me, it will feel more authentic.

Basically, I can sum all these points up with the simple “Write what you know.” It’s one of the things my favorite writing teacher would say often. No, I don’t know a serial killer but I do know a lot about psychics. I do know Wilmington. And it’s fun to start with these little things you know, think to yourself, “What if…?” and start creating a story you didn’t know you knew. 😉

If you liked this article, please share it using the buttons below, or click to send a ready-made tweet. And then go read Amy’s awesome pitch for A SCARRED MIND at the Pitch Wars showcase (it’s #5, Adult category).