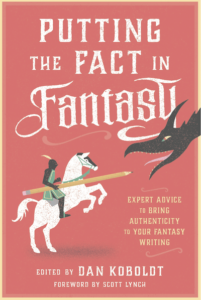 In three weeks, Penguin Random House will publish the second nonfiction book for writers edited by yours truly. Putting the Fact in Fantasy is the fantasy side of my Science in Sci-fi, Fact in Fantasy blog series — and meant to be a companion to Putting the Science in Fiction, which was published in 2018. In some ways, I’ll be relieved when the book comes out. It was a long road to get here.

Unlike most novels, nonfiction books are generally sold on proposal. As a writer, I love the idea of selling books on proposal; it requires less work (and risk) up front, and it provides useful things like an advance and delivery date for the manuscript. Yet it also extends the lead time significantly because the author needs time to write the book. We started working on the proposal for PFIF about two years ago, in mid-2020. You might remember that it was a hard and frightening time for many people. I found it very difficult to write fiction, so the proposal was a welcome distraction.

We had a major advantage at the proposal stage because Putting the Science in Fiction was a successful book in nearly every measurable way (perhaps most importantly, it had earned out its advance). Our success with PSIF meant that:

All of the above were good things, not just for our odds of success, but for the investment of everyone’s time in trying to sell this book. Yet there was one advantage missing, or perhaps lost, that we might otherwise have enjoyed: an existing relationship with the publisher. In March 2019, about five months after PSIF was published by Writer’s Digest Books, the publisher’s parent company, F+W Media, filed for bankruptcy. Note: this was not due to the WD imprint; it was one of the few profitable divisions. The company was effectively dissolved and auctioned off in pieces.

Penguin Random House bought the WD Books imprint (for a song, it needs to be said; they were the only bidder). That was okay; the world’s largest publisher knew how to manage a book catalogue. However, they generally acquired the IP and non-human assets, not the employes. Everyone I knew at WD Books, wonderful people with whom I’d built good working relationships, no longer worked there. It sucked, though I was relieved that they all quickly found new jobs elsewhere. And to their credit, PRH took over operations with smooth professionalism. Their royalty statements, while even harder to decipher than F+W’s, come on time.

Still, we had no acquiring editor and had to start over. Fortunately, my agent Paul Stevens and his boss, Donald Maass, worked their contacts to (1) confirm that PRH intended to publish new books under the WD imprint and (2) figure out who’d be doing the acquiring. We sent the proposal. We got the call. It went to acquisitions, and we sold the book. That’s how I landed with my editor, Joanna Ng, who acquired books for other PRH nonfiction imprints and was excited to work on Putting the Fact in Fantasy.

Writing the Book with Contributors

Once we signed the contract, we began phase 2 (writing), or as I like to call it, herding cats. Some of my contributors were also part of PSIF and knew what to do, but the majority were not. I didn’t have to most of the writing — that’s a nice advantage of compiling a book written by many other people — but I had to get contributor agreements signed, outline the specs for delivering a publisher-friendly manuscript file, and put it all together into a single smooth, polished manuscript.

I also had to line up some new chapters, because one key element of developing a book from a blog series is creating some content that will be unique to the book. In other words, I had to find contributors to write new chapters that would fulfill several needs, including balancing the subject matter of the book and the representation of its authors. Most of them hadn’t even done guest posts for me before, so it was a totally new experience.

My contributors are fantastic. They came with me on this crazy ride before it was a sure thing, and they’ve been patient throughout. Still, it’s a lot to manage communication and files with 30+ individuals who are spread across the globe. Most are quite responsive when I need something. Some are less so, probably because writing a chapter for a nonfiction book is not their primary job.

Honestly, it was much harder at the developmental edit and copy edit stage. Merging tracked changes across dozens of Word documents — many saved with different version of Word, sometimes in different languages — was a huge undertaking.

Over the past several months, we’ve been through a couple rounds of proofreading. PRH did a sensitivity read, which was very helpful in identifying some issues that had gone undetected. There was a cat-herding aspect to this phase as well, but generally speaking as the “editor” I felt comfortable stepping in if a change needed to be made and the contributor didn’t get back to me in time.

Then came the audiobook. We were offered a choice of several narrators. Some were men, some were women. All were pretty fantastic and experienced. I let all of the contributors weigh in. Like anything, there was no total consensus, but one narrator was consistently favored: Eunice Wong. I’m thrilled that she will be the voice of the book, which after all has more contributors who identify as female than those who identify as male.

Then came the pronunciation queries. Imagine getting input on pronunciation from numerous contributors writing about various languages, cultures, and aspects of history (real and fictional). More and more kept coming up. Sometimes I just had to shrug and say things like “I have no idea how to pronounce Egwene Al’Vere.” It was a lot of work, but I’m sure the

While all of the editorial stuff was happening, I was also introduced to the PRH marketing and publicity contacts for PFIF. This is always exciting, because it’s a sign that people other than you will be doing things to promote the book. Which, by extension, means that the publisher wants to help the book succeed. That’s a big deal.

PR and marketing people can get coverage that I can’t. They also have the ability to address unforeseen issues, like when one of my UK-based contributors informed us that the book page on Amazon UK had a formatting issue.

At the moment, we’re offering advance copies of the book to established authors, book reviewers, and magazines in hopes of getting some blurbs and/or advance reviews. This is always hard — every recipient no doubt receives hundreds of books a month, and can only cover a select few. Incidentally, if you happen to be a book reviewer and would like a copy, please get in touch. You can also request it on NetGalley.

So, that’s where we are. Drumming up reviews, lining up some interviews/guest posts, and otherwise focusing on the book release. I’ll have more to share over the next few weeks, as well as some new never-before-seen Fact in Fantasy posts by some of my contributors. Stay tuned.