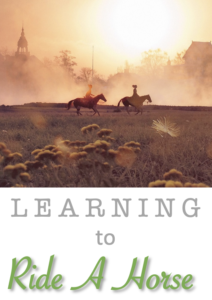 This article on learning to ride horses is part of the Science in Sci-fi, Fact in Fantasy blog series. Each week, we tackle one of the cultural, historical, or world-building aspects of fantasy with input from an expert. Please join the mailing list to be notified every time new content is posted.

Shannon Ferretti has been horseback riding, and taking lessons, for more than twenty years. She’s been reading fantasy novels longer than that, and writing them for a considerably smaller number of years. Shannon’s spent most of her riding time training under Dressage-based principles with Claudia Hutchinson, who is based in central Ohio and the former coach of Denison University’s Equestrian Team. 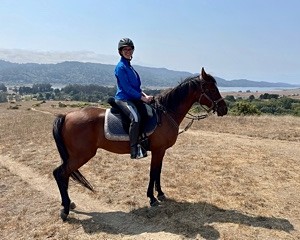 Shannon was a finalist in the Ohio Writers’ Association’s Great Novel Contest 2019 and is currently working on a fantasy novel. You should follow her on Twitter.

Learning to Ride A Horse

I’ve read more than a few fantasy novels where the hero is plopped onto a horse for the first time and effortlessly rides off into the sunset and onward to victory, and they always irk me, at least a little. Why? Because learning to ride takes hours of practice and, in most cases, lessons from an instructor. It takes physical strength and mental focus and a keen sense of body awareness. Sure, there are the occasional naturals, just like there are the occasional piano prodigies who can play Mozart at four years old. But, chances are, that newbie rider isn’t going to have a flawless experience.

Sure, I can already hear you protesting. Your uncle went on that group trail ride one time, never been on a horse before and was totally fine. So, yes, I concede—there are a few scenarios when a rider with no training can be on a horse incident-free:

And that’s pretty much it. Go faster, and there’s more movement for the novice rider to absorb. Most of us will instinctually react to this new sensation by tensing our muscles, which makes the rider’s body bounce in the saddle instead of smoothly moving with the horse’s motion. It also causes the rider to be thrown off balance, which then affects the horse’s balance. Imagine having a small child on your shoulders. Sure, they’re about a tenth of your weight, but when they lean one way or the other, your balance is still thrown. 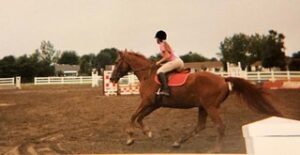 Me competing for Roundhouse Stables in a jumper class (Credit: Claudia Hutchinson)

Horse do not like being off balance. Their legs are fragile and prone to injury, and in the wild, a leg injury could easily be a death sentence.

Learning to Sit On A Horse

From the rider’s side, our instinctual safety position is the fetal position. Something scary happens, we curl up, round our shoulders, and try to make ourselves smaller—all of which provides better protection to the brain and vital organs. When you’re riding and you round your shoulders and curl up, you put your center of gravity too far forward, throwing your horse off balance and putting too much weight over the shoulders. This makes it harder for them to lift their legs, as their front legs already bear about sixty percent of the horse’s weight—adding the bulk of your mass to that burden doesn’t exactly make their job easier. Most horses will slow down when this happens, because it’s the path of least resistance and they don’t want to work harder than they have to.

Now your horse is going slower than you want him to, so you squeeze the horse’s sides with your legs and tell him to get on. He moves faster in response to your leg, but because your body isn’t used to the faster motion, your muscles will tense and your shoulders will round and all of a sudden you’re impeding the horse’s forward movement again. So he slows down. You, not realizing why he’s slowing down, get frustrated. So you’re squeezing his sides with your legs even harder, maybe kicking even now. Your horse just won’t go, what a brat he’s being.

But put yourself in his shoes. Pretend you’re at work and your boss tells you to do a task, then immediately makes it much much more difficult than it needs to be and then gets angry at you for not doing it fast enough. Pretty frustrating right?

What Beginners Should Do

And this is why beginner riders should only ride very patient and forgiving horses, who may be annoyed with their ignorant rider who’s making their life difficult, but they’re just going to do their best to ignore you and do as little work as possible (aka go as slow as you’ll let them). 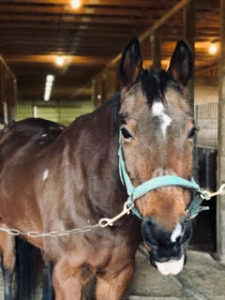 Jesse, who looks cute and innocent but has really dumped more riders in his twenties alone than I’ve been on vacations in my lifetime

Not all horses are so patient, however. Some horses, just like some people, get pretty heated when the boss is giving conflicting orders and making their lives difficult. Those not-patient horses will throw temper tantrums in an attempt to unseat the offending rider, and if they’re successful and get to be done with riding for the day, they’re going to keep doing it. Horses are incredibly smart and learn very quickly—there’s a saying that you train your horse every time you ride. So once a horse learns he can rid himself of his pesky rider and have the rest of the day off, you’re in big trouble.

And if you are a new rider and on one of those temperamental beasts, you’re probably going to be thrown off said beast, which will only increase your fear response the next time you ride and make the cycle even worse.

Which is where instructors come in, having you consciously correct your position to move in harmony with the horse, which is when the galloping off into the sunset magic can start happening.

Now, I’m not saying you have to give your character months of riding lessons before they can go, but I am saying it wouldn’t hurt to either include some backstory comment about where they learned to ride, or include some of the things that can go wrong with a new rider.

I should add that it doesn’t completely ruin reading a book for me if a new rider goes galloping up the trail, and I’ve enjoyed many books that include exactly that. It’s just that as a lifelong horseback rider, I can’t suppress the slight distraction from story when I see it.