About eight years ago, I finally got serious about becoming a fantasy author. I established this website and, for lack of anything better to do with it, started blogging. At the time, I had few credentials as a fiction writer. However, I had hands-on knowledge of genetics because of my day job, as well as some experience with fantasy-adjacent subjects (archery and outdoor adventuring) thanks to my decades-long obsession with bowhunting. Yet there were many more topics relevant for SF/F writing, and I didn’t know more about them than the average layperson. I began recruiting experts, and so the Science in Sci-fi / Fact in Fantasy blog series was born. 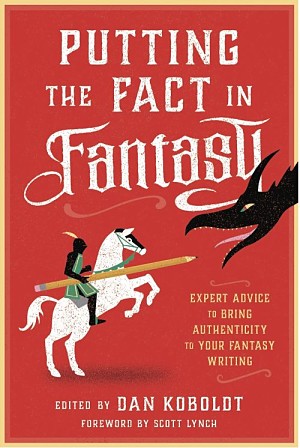 The book is here! Check it out.

After formatting and editing… *checks notes* … more than 170 guest posts across a wide range of subjects, I’ve come to believe that this ongoing series represents one of the best resources for SF/F writers anywhere. It’s enough to fill not one, but TWO books, the second of which was published today by Writer’s Digest Books. Putting the Fact in Fantasy collects essays from historians, linguists, martial artists, and other experts — 34 of them in total — to help fantasy writers create more realistic and compelling stories. Somehow I persuaded Scott Lynch, the NYT bestselling author of The Lies of Locke Lamora (and, in my opinion, one of the best world-builders in modern fantasy) to write the foreword. At the gentle suggestion of my editor, Joanna Ng at TarcherPerigee/PRH, I asked my friend Eric Primm to reprise his essay, “Research in Writing: How to Ask an Expert,” for the introduction.

Here are the major sections of the book, along with a few highlights of things I learned in each:

It Already Happened: History as Inspiration

How to Make It Up: World-building

Weapons and Warfare: When In Doubt, Add These

You Don’t Know Horses, But We Do

So You’re Going On An Adventure

As we all know, the internet is rife with misinformation and disinformation. Although Google, Wikipedia, and other resources can be useful tools, there’s no substitute to getting advice from a real-world expert. Putting the Fact in Fantasy collects the advice from more than thirty such experts, who will teach you enough about their topic areas to write convincing stories. If this sounds like it would be useful to you, I hope you’ll check the book out. Should you need more convincing, here are some snippets from advance reviews:

“These snappy essays were excellent; well-written and with lots of humor. The authors’ enthusiasm comes through.”
–Stephen G

“I would highly recommend this book to all fiction writers as an essential guide to help them enhance their writing and world-building.”
“I learned that almost everything I thought I knew about horses was wrong! I can now properly describe a horse’s height, coloring, and gaits without sounding like an amateur.”
–Kimberly P

“I learned so much, and have not shut up about all the random things in the last week. Would recommend to any and all fiction writers, not just fantasy!”
–AJ

“Amongst the dull stacks of books about writing (I have read many), this book is a bonfire-bright beacon of useful and exciting tools to help any writer craft great fiction and fantasy.”
–Carolyn B

The book is called Putting the Fact in Fantasy. Here’s where to find it.