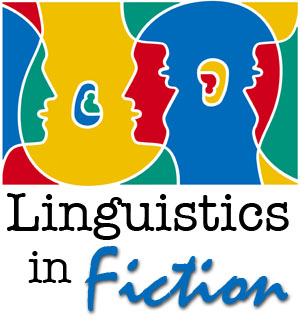 Christina Dalcher, Ph.D. (@CVDalcher) is a theoretical linguist specialising in phonetics and phonology. Her research has covered the physical, cognitive, and social forces contributing to sound change in Italian and British English dialects. She has also written her first novel – an adult thriller featuring (you guessed it!) a linguist. You can meet Christina at her blog.

I recently saw a graph depicting a fact I’ve long suspected:  the probability that a book is good varies inversely with the number of words the author invented.  My advice?  Believe it.  When I read science fiction, I read Heinlein.  It’s good stuff, I don’t need a glossary, and my eyes don’t roll at unintelligible strings of punctuation marks in dialogue.

Of course, exceptions exist.  Burgess’ A Clockwork Orange comes to mind. With a Nadsat vocabulary drawn from Cockney rhyming slang, Slavic roots, and Burgess’ own neologisms, it worked.  It worked because Burgess knew his linguistics (he was a phonetics lecturer in early life).  And he knew it so well, he got away without including the Nadsat glossary in the first edition.

Not everyone who writes, whether it’s sci-fi, fantasy, or a Lee Child-esque thriller, can possibly have an expert-level background in everything.  Most of us know our limitations.  The problem, when it comes to linguistics, is this:  unlike chemistry or engineering or genetics, knowledge of language is an inherent part of the human condition.  By the time we’re three years old, barring pathologies, each of us speaks his native language perfectly.  It’s precisely this fact that can lead writers down the garden path and permit the delusion that everyone is an expert when it comes to something as universal as language.

Don’t take this as an attack on you.  It’s not meant to be.  If anyone deserves the blame for bad linguistics in writing and film, it’s probably the language scientists themselves.  We’ve done a lousy job of self-marketing over the past half-century.

With that preamble, let’s move on to specifics.

Four things I see in novels and movies that make me want to run.

This [insert piece of evidence] was obviously written by a woman.  You can tell from the syntax.

Really?  Having studied syntax for more years than I’d like to remember, I’m hard pressed to find a difference between male grammar and female grammar.  Wanna talk lexicon?  Dancing around before getting to the point?  The fundamental frequency of a speaker’s voice?  I might buy the gender assumption from sociolinguistic or acoustic clues.  But, as far as I know, the syntax of a language doesn’t vary much between women and men.  Whatever anatomical features we have, we still need subjects and verbs and objects, and we need them in a certain order.  The take-home message here is simple:  If you’re going to make a statement about language, you need to do more than toss out a term of art.

There’s no word for [insert concept] in [insert language].  That really tells you something about the culture, doesn’t it?

Ah, the good old Sapir-Whorf Hypothesis (SWH, henceforth).  Combine the strong version of this chestnut with hearsay and you’re guaranteed to be the life of the party.  Unless, of course, a linguist is standing nearby.  Or worse – a native speaker of whatever language you’ve just made a sweeping generalisation about.  There’s an easy way to avoid getting yourself stuck in such a situation:  Don’t do it.

Whorf went there and earned himself a trophy in the Linguistic Hall of Shame (unfortunate, because he did make other very sound contributions to language study). While linguists may accept the weaker version of the SWH – the claim that language shapes our thoughts and behaviour to some extent, very few agree to the strong version of linguistics relativism – that our thoughts and actions are actually constrained by the language we speak.

The [insert cultural-linguistic group] have [insert made-up number] of words for [insert word].

Here we have the corollary to the previous problem.  You’ve heard it before, usually with words like ‘Eskimo,’ 100, and ‘snow’ to fill in the blanks.  Don’t fall for it.  The Eskimo Snow Word Swindle sprouted from – you guessed it – a combination of bad research and misquoting.  Use something like this in your writing and readers will gasp in awe, quote you at their next cocktail party, and perpetuate the myth by telling their kids.  Linguists, on the other hand, will be shaking their heads wondering why they failed at educating Joe Public.  Like I said – lousy marketing.  And think about it for a minute: don’t we English speakers have passel of snow-related words?  When we don’t, we can create snow-related phrases along the lines of “nice packable snow suitable for snowman-building.”  The only real difference between that phrase and an Inuit ‘word’ meaning the same thing is that one of them includes some spaces.  Not a very interesting distinction, in my mind.

Sigh.  Here’s a fact:  All languages are complex.  And every single one of them can handle any concept.  If a language doesn’t have a word for ‘quark’ or ‘cornflower blue’ or (God forbid) ‘snow’, guess what?  If it needs one of those words, it’ll add it into the lexicon.

Here are four snippets about language that I’d love to tell you about.

1. Accents vs. dialects vs. languages

There’s an old saying: “A language is a dialect with an army and a navy.”  This does a great job of encapsulating the fuzzy difference in meaning between dialect and language, but I’ll try to sort things out in a bit more detail.

Linguists generally use the term accent when referring to speech patterns carried over from a speaker’s first language to a second language.  Example:  Giuseppe, from Naples, speaks English with a marked Italian accent.

We use dialect when we’re talking about mutually intelligible variants of the same language.  Example: Mary’s Brooklyn dialect is notable for dropping final ‘r’ sounds, but anyone who speaks English understands her perfectly.

Languages get tricky.  I could say that one speaker of Language X will always understand another speaker of Language X, and I’d be right – most of the time.  But what do we do about Chinese?  Or Italian?  Both of these languages comprise multiple variants that might be considered dialects.  But they’re not, really.  In the case of Italian, we’ve got everything from Sicilian to Neapolitan to Venetian to Genovese, mostly due to the relatively recent unification of small city-states in Italy.  Put a Neapolitan and a Venetian at dinner table, and you might as well put a Neptunian and a Venusian in their places.  Those so-called dialects are different enough to be mutually unintelligible.  There’s a sense in which they’re really languages on their own, minus the armies and navies.

In sum, if you want to use terms like accent, dialect, and language in your work, have a think about the difference in meaning among them.  Linguaphiles will thank you for it!

Here I’m going to borrow heavily from An Introduction to Language (Fromkin & Rodman, 2003) because they’ve said it so well.

All human languages (now numbering around 6,000), whether they are spoken or signed, share common elements.  On the phonetic side of things, every language employs a limited number of sounds or signs.  Grammatically speaking, every language has syntactic categories – go ahead, find me a language with no verbs, I dare you!  All languages have rules governing the formation of words and sentences, negation, question-making, imperatives, and verb tenses.

In the realm of semantics (meaning), certain universal concepts are found in all the languages of the world:  things like ‘living’ vs. ‘non-living’, ‘male’ vs. ‘female’, ‘animate’ vs. ‘inanimate’. When it comes to spoken languages, each and every one on our big blue planet uses a subset of possible speech sounds; in that subset, you’ll find both vowels and consonants.

The take-home message here?  Human languages are a lot more similar than they are different.

Here it is – the part you’ve all been waiting for!  Unfortunately, I’m not going to be able to invent an alien language for you.

What I can do, instead, is give you a short assignment.  Go into your library (book or film) and pick out a few of your favourite sci-fi works that incorporate some weird alien language.  Read or listen to them.  When you’re done, ask yourself one question:  Do those alien languages differ significantly from human languages?

In many cases, I think you’ll find what I’ve found:  alien speech in fiction almost always follows the same rules and constraints that human languages do.

Since what I write is grounded in the here-and-now, I may not be the best person to come to if you need advice on how to make E.T. sound.  But I can tell you this:  think outside the box.  Ask yourself what features you could bestow on your non-human character that would enable him to do something truly different.  If you’re creative enough to write sci-fi or fantasy, you’re creative enough to do that.

Thanks to the fantasy writers for being patient while I dug into outer space.  Let’s come back to Earth now.

We all spent time in school studying those Latin and Greek roots in English words, and for good reason – there are tons of them.  But English, along with Latin, Greek, and a ton of other related languages, falls squarely into the Indo-European family.  Yes, Indo, as in India.  The next time you dig into linguistic history, have a look at Sanskrit.  You might be surprised to find that saabun means ‘soap’ and we got cummerbund from the word for ‘loin band’.

A few authors who nailed the language thing

Why?  Generally because they kept it simple and didn’t try to go too far.  There’s that old saying “Write what you know,” right?  It’s good advice.

Getting Languages Right in Fiction

Unfortunately, when it comes to linguistics and its numerous subfields – phonetics, phonology, morphology, syntax, semantics, pragmatics, sociolinguistics, and historical linguistics – delving deep into the abyss of language literature might not be feasible.  Not if you need to spend your time banging out the rest of a 100,000-word novel and also need to brush up on chemistry, engineering, and genetics.  There’s simply not enough time in the day.

My suggestion, then, is to find yourself a real, live linguist.  Most universities will have one or two.  Also consider using the Ask a Linguist feature on the LinguistList: http://www.linguistlist.org/ask-ling/

What happens if you get it wrong?

In short, a linguist will find you and post snarky comments on his blog.  Geoff Pullum has done this more than once, but my favourite bit of Pullum-Snark is a Language Log piece entitled “Learn some phonetics, Reacher.”  In it, he rips apart Jack Reacher’s (really Lee Child’s) casual toss-out of speech science jargon without having done even a minute of research.  As Pullum points out, “in five minutes over a beer with any linguist” Child could have seen the error of his ways.  Read about it here.

You don’t want to be Pullum’s next victim.  Trust me.  Do your research or ask a linguist (there are tons of us, including yours truly).  If you don’t have the time to do either of these, kill your linguistic darlings.