The world of publishing is undergoing an evolution, fueled in part by the growth of e-books. As a Kindle owner, I admit that I’m playing a part in this. I love being able to carry an entire library with me wherever I go, and to get any book I want within 30 seconds. As an author, however, I’m occasionally stricken with the fear that I’ll never see my own books in print. Never get to hold them in my hands, or give them to family and friends. Because the e-book segment continues to grow while market for printed books is foundering.

Last night, however, I had an experience that put this fear to rest. I was reminded of the magic of old books.

We’d gone over to my parents’ house for a little visit. My mom is a true bibliophile: she collects books, reads them constantly, and even works as a school librarian. Lately, she and my dad have taken a real interest in genealogy. They’ve both traced back their roots (and therefore my roots) hundreds of years, aided by the ever-addictive Ancestry.com. About a month ago, my dad found that one of our ancestors had served in the Revolutionary War under George Washington.

Not to be outdone, my mom set out to prove herself a daughter of the American Revolution. She grew up in Lancaster, Pennsylvania, so it did seem plausible. And indeed she found an ancestor who’d lived here in the late 18th century and served in the war. But we’re competitive in my family, so she looked at another ancestor who lived in that time, Googled him (this is good for headstones), and got a hit. It wasn’t a headstone, though. It was a listing in a rare bookstore.

The book was a three-volume catechism in German, published in 1749 in Tubingen, Germany. Its cover was vellumized pigskin over beveled wooden boards. Its text was old, with some water damage, but generally quite readable. According to the lovely inscriptions within, it had belonged to Jacob Froelich, my great-great-great-great-great grandfather. And it was for sale.

So my mom bought it.

Last night, I held this 265-year-old book in my hands. It’s about the size of a shoebox, but lighter than I’d expected. The cover felt sturdy but soft, undoubtedly smoothed with age. According to the bookseller, the binding is “alum-tawed” pigskin, a kind of leather made by soaking the hide in alum and salt.

There were two clasps originally that held the massive tome closed; one still remains. Hand-tooled flowers also decorate the cover. The title page has some damage to it, which is unfortunate because it’s a lovely work of black and red ink. But the absolute best part of the book is that there’s writing in it.

Among other things, it tells us that Jacob Froelich was born in 1739 in Germany. He married (in 1763) Anna Eva Elizabeth Reich (ca. 1740 – 1824) and they lived in Lancaster County, Pennsylvania. There are other birth and death records as well, all handwritten in German in the first and last pages. All about my distant ancestors who lived 250 years ago. Here’s the pedigree, from Jacob all the way down to me: 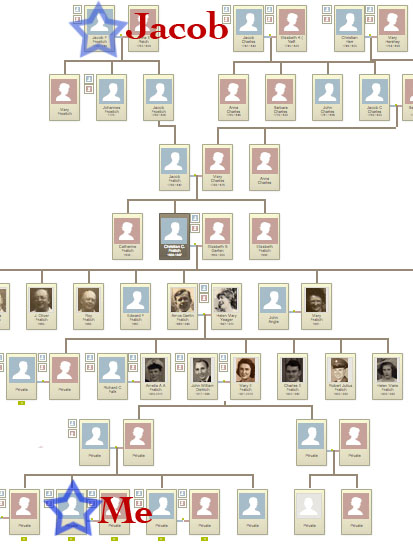 The bookseller, as it turned out, was in Lancaster. He couldn’t tell us where he’d gotten the book, or at what point my ancestors had parted with it. Certainly Jacob owned the catechism for most or all of his short 45 years of life (he died in 1784). Whatever its fate, the book survived — no doubt aided by the pigskin — for a quarter of a millennium before finding its way into my family once again. When it did, it shared little pieces of our ancestry that we hadn’t known, written in candlelight by Jacob’s own hand, in the times of the founding fathers.

That, truly, is the magic of old books.