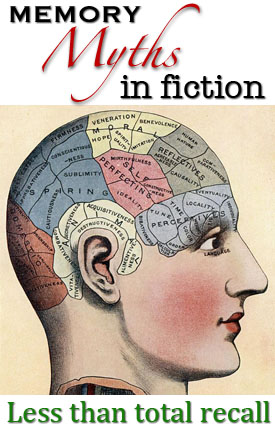 Anne M. Lipton, M.D., Ph.D. (@AnneLipton) is a behavioral neurologist who specializes in dementia. She has several academic books to her credit and has written an adult mystery and several picture books.

Memory in Fiction and the Realities of Remembering

First we’ll tackle some of the myths about memory in fiction.

Myth #1 Memory = attention (or language or visuospatial skills or all of the above).

Sometimes people conflate memory with another cognitive (mental) domain—or all of them. For example, a person may have difficulty recognizing faces (prosopagnosia) and this perceptual difficulty (agnosia) may be misinterpreted as a problem recalling names.

Reality: Memory refers to specific cognitive processes for the encoding (processing), storage, and recall (retrieval) of information. These functions are analogous to writing a message, filing it away, and getting it out later and reading it.

Memory may be divided into declarative (explicit) memory, which can be tested verbally, and non-declarative (implicit-procedural) memory, involving perception and motor skills, such as riding a bike or playing an instrument. Episodic memory (recall of events) and semantic memory (one’s “encyclopedia” of learned facts) are types of declarative memory.

Anatomically, different brain regions mediate different aspects of memory. Key among these are parts of the brain’s frontal lobes and temporal lobes. Named for its seahorse-shape, the hippocampus and its associated entorhinal cortex are essential structures for explicit memory. The hippocampus is part of the limbic system, which includes the amygdala, a structure underlying basic drives and emotions.

Besides memory, the other main areas of cognition (thinking) are: 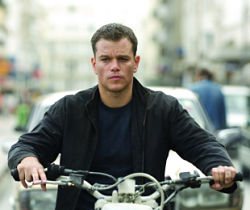 DK note: But let’s agree that Jason Bourne is awesome

Numerous examples of what I like to call “Made-for-TV amnesia” abound in movies and books like The Bourne Identity (or the lack thereof). In such cases, a character (+/- head injury) finds himself in a strange place or situation and can’t remember his name. He is otherwise healthy, alert, walking, and talking. Somehow, he can recall the names of things like phones, boats, or passports (words that one usually learns well after one’s name). He can learn new information and also remembers how to drive, etc. Memory doesn’t work like this.

Reality: Memory doesn’t operate in isolation. It works in concert with sensory input to the brain. It is distinct from, but intertwined with other cognitive domains such as attention. People often see memory as operating independently of these other processes, but the system is interdependent. Language and memory are so tied together in terms of how we humans communicate and remember that memory is often classified in terms of verbal and non-verbal recall. Visual memory tends to be the non-verbal type of most clinical interest. But other types of nonverbal memory can be just as important, if not more so, in daily life—and writing. Proust’s madeleine in Remembrance of Things Past is a sweet example of gustatory (taste) memory:

“And suddenly the memory revealed itself. The taste was that of the little piece of madeleine which on Sunday mornings at Combray (because on those mornings I did not go out before mass), when I went to say good morning to her in her bedroom , my aunt Léonie used to give me, dipping it first in her own cup of tea…”—Marcel Proust, Remembrance of Things Past

Memory also has temporal patterns. Most laypeople use the terms short-term and long-term memory, but neuroscientists generally refer to working memory and reference memory or else immediate (short-term), recent (e.g., current events), and remote (long-term) recall.

Because of the interconnectedness of cognitive processes, memory loss that is sudden and severe is likely to be associated with other medical or psychological issues. If a head injury (or similar insult) is severe enough, one may have retrograde amnesia (memory loss for past information and events), particularly if there is altered consciousness. But this would be most profound for events around the time of the trauma. I buy that Bourne or whoever may have such amnesia, but this would be unlikely to extend only to longstanding aspects of his identity while sparing more recent and mundane matters. It should be the other way round. Ribot’s law of retrograde amnesia refers to the common phenomenon in which more recent memories are forgotten to a greater degree than more remote ones.

Someone with a traumatic brain injury (TBI) or the like may also experience anterograde amnesia (difficulty learning and remembering new information). Bourne doesn’t seem to have a problem with “new learning,” which also makes his selectively impaired recall less credulous: the more severe a trauma causing amnesia, the more likely that anterograde amnesia will occur. There’s no singular or centralized memory center that you can obliterate to erase all of someone’s memories. Although, if you want to come close, destruction of each hippocampus on either side of the brain (= the bilateral hippocampi), can produce severe anterograde amnesia.

To suddenly forget one’s name, other identifying traits, and all the major players in one’s life, while functioning otherwise normally, is not easily explained by a head injury or other neurological insult. Even in Transient Global Amnesia (TGA), the name overstates the case, as the amnesia is often not total. Moreover, it is often linked to an underlying medical condition, such as blood vessel (vascular) disease or migraines. Drugs don’t make you forget who you are unless they cause you to become so delirious (delirium = acute confusional state) that you begin having delusions (false beliefs).

Forgetting one’s self while everything else seems normal doesn’t fit with the anatomy or temporal patterns of memory, suggesting a psychogenic amnesia. Rarely, after extreme physical and/or psychological trauma, such as severe abuse, or another situation someone wishes to escape, a person may enter a “dissociative fugue.” (E.g., the man who washes up on the beach who can’t recall his own name but can play the piano and learn the names of new people he meets. Someone experiencing such a state may even adopt a new identity.)

A person who has completely forgotten his or her identity and journeys to find it again makes for a great story, which is probably why this plot point is so popular, even if it is so improbable. 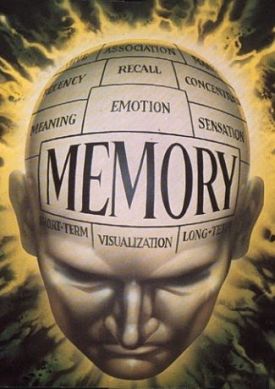 Our oldest and most-often used memories (e.g., our names) are what we memory specialists sometimes like to call “overlearned” information or what laypeople sometimes call “hard-wired.” Unless you suffer serious trauma (with accompanying medical symptoms), you are unlikely to suddenly forget your home or your family or your job or all the everyday things that make you who you are. Of course, sometimes people may develop a neurological illness that gradually affects memory. A dementia is one example of such a progressive (i.e., progressively worsening) neurodegenerative disorder, which adversely affects cognition (often memory) and interfering with daily functioning. However, even in the case of a dementia such as Alzheimer’s disease, your name is likely to be the last thing that you forget.

It’s right up there with the perfect murder and the unsinkable ship. Memories often fade with time or become reworked.

Certainly, some people have better memory abilities than others, memory can improve with practice, and certain techniques (referred to as “mnemonics”) can aid memory. However, anyone who remembered everything would have a difficult time making it through everyday life (beautifully illustrated in the classic short story “Funes, the Memorious” by Jorge Luis Borges). Besides, flawed characters are much more interesting. Every superman should have his kryptonite.

Reality: Memory is rather imperfect. Which is not necessarily a bad thing. Although it can be, say if your fate depends on the testimony of eyewitnesses, who are notoriously unreliable.

Memory has its limits. It is easier to retrieve a memory using cues (recognition memory) than via spontaneous (or free) recall. Repetition can aid memory—or alter it. The human penchant for pattern recognition may likewise help or bias our memory. Roast, roast, roast, roast. What do you put in a toaster? (Hint: not toast).

When it comes to memory in fiction, here’s a few things to, er, remember: