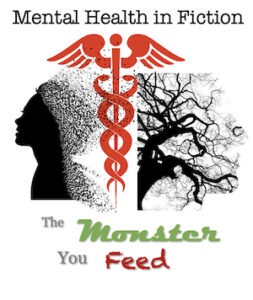 This article on mental health in fiction is part of the Science in Sci-fi, Fact in Fantasy blog series. Each week, we tackle medical or technical aspects of science fiction or a historical / world-building topic of fantasy with input from an expert. Please join the mailing list to be notified every time new content is posted.

Olaseni Ajibade is a Nigerian MD currently working as a hospital-based physician in Augusta, Georgia. He’s also a contributor to Putting the Fact in Fantasy, having written a fantastic, only-in-the-book chapter on on the health and wellness implications of world-building.

The Monster You Feed

Since the pandemic I’ve been repeatedly stunned by how much it feels like my work has shifted from physician to therapist. But to be honest, physicians and therapists are more or less, keepers of stories. The narratives we hold often have a huge impact on how we understand ourselves and our health. Now that mental health has become a topic of mainstream discussion, it is worth examining how we have addressed these topics in fiction. For better or worse, the lore surrounding vampires and werewolves are the best depictions of mental health and addiction.

For most of human history, disease both physical and psychological was the purview of the gods. In some cultures, certain diseases were even worshipped as deities. But more or less, the established narrative was that you became afflicted because you sinned against the gods. Lycaon for instance, was cursed by Zeus after sacrificing and child and consuming the remains of a child.  For this crime, he and his sons were turned into wolves. Similarly, old Russian folktales speak of witches who were cursed with vampirism for having rebelled against the church when they were alive. The ensuing need to consume blood would serve to ostracize them further, deepening the fall into darkness.

Isolation is often a hallmark of addiction and other mental health disorders. Some vices simply cannot be consumed in polite company. When your vice happens to be the blood of those around you, it becomes a matter of both personal and public safety to avoid the larger community. Eventually, there is no one left to associate with except other outcasts. When told through a religious lens, these stories become parabolic and establish the social mores of the community. The obvious warning is that transgressors will be disfellowshipped from their families and from salvation.

Depression and other Psychiatric Disorders

While isolation is often indicative and reinforcing of addiction, it typically runs in parallel with several other mental health disorders, especially depression. Vampires are often depicted as melancholic, brooding, often asleep during the day. These are some of the typical signs of depression, which is characterized by problems with sleep, a lack of enjoyment in life, fatigue, and irritability. Untreated depression can lead to suicidal ideation. This is sometimes depicted as the vampires’ fascination with death and the macabre.  It can be draining to care for someone who has refractory depression. It might feel like slowly being leeched of your own life force. Eventually you will have to decide how close you can let yourself get to someone dealing with that. Perhaps this explains why vampires need specific permission to enter a life.

In contrast, werewolves are a little more complex and are analogous to a range of psychiatric illnesses. Generally, these diseases can have features of psychosis and dissociation where the person might lose their sense of reality or self.  Examples include culture-bound syndromes like Running Amok or Beserker Rage but also, dissociative identity disorder, schizophrenia, and especially bipolar disorder. While these conditions have variable periods in which patients are more or less “human,” the manic phase of bipolar disorder is likely how we think of the wolf.  Mania is typically a state of high energy; patients in this state can feel unbridled, mentally and physically. They are energetic to the point of not sleeping for several days, easily distractible, and exhibit poor decision making. Some people will go on random shopping sprees, drug binges, or engage in risky sexual behavior. People in this state may not even be aware that they’ve done any of these things or might not have been able to stop themselves.

On Dependence: Who is really in Charge?

The question of control is an important consideration especially in this context. Depression breeds pain, and pain breeds depression – an excruciating ouroboros for those suffering with the condition. People will do almost anything to avoid pain. Often enough, that quest leads to addiction. Key to understanding addiction is how much the drug of choice is needed vs wanted. Here too, these stories can shed some light. Vampires essentially represent a physical dependence on consuming blood. Without it, they eventually cease to function. Werewolves on the other hand, typify psychological dependence in that imbibing blood is not necessary for them to be functional in society.

In reality, the distinction between psychological and physical dependence is not binary. Vampires and werewolves are shown in many stories to mitigate their bloodlust by consuming wildlife, and yet many stories feature them imbibing from a living person sometimes after protracted attempts at abstinence. The Twilight Saga is, in essence, a convoluted story about a vampire who stalks and ultimately bites a young woman told from the victim’s perspective. For good measure, there also happens to be a werewolf who is drawn to the same person but settles for taking her child when his prey is otherwise claimed. This could also represent enticement – an addict trying to get others addicted. This normalizes drug use and reduces the isolation ultimately reinforcing the addiction. Despite the uncharitable description, these behaviors occur because addiction physically changes the brain, sometimes for years. Breaking the cycle of addiction requires both psychological and neurochemical change. That’s why many addicts can’t just “stay sober”. In fact, relapse is more likely to result in overdose when someone has been sober for a long time since their body is no longer used to the drug.

The use of blood as the preferred vice for both vampires and werewolves is interesting in one more way – they represent two sides of stimulant intoxication and withdrawal. Drugs such as cocaine and amphetamines can cause symptoms that are nearly impossible to distinguish from mania – the wolf. A good example is the face-eating cannibal high on bath salts. Conversely, the crash from cocaine and amphetamines can be hallmarked by fatigue and deep depression. Some people can become suicidal in this state. Curiously, long-term users have been shown to develop a profound and severe (albeit asymptomatic) bradycardia when they stop using. In this light, it’s no wonder vampires are considered undead.

Hiding in the background of all of this is trauma, often violence. Some people commit violence to feed their addictions and others become addicts because of it. In some ways it’s a chicken or egg problem. After all, Stoker never explicitly states how Dracula became a vampire and modern werewolf stories need not reach back to Lycaon or other mythology to progress. But now it is established that making new scions is inherently violent.

The question for society at that point is how to manage the problem. A retributive society would end up creating a militarized police to address the problem vis-a-vis the so-called “war on drugs” or the Deathdealers in Underworld. A more restorative/rehabilitative society might emphasize more programs aimed at curbing the addiction. The Aniteku café in Tokyo Ghoul is one example of this could be addressed. Early stories in the genre were more retributive while there are more elements of harm reduction and rehabilitation in more modern stories.

The question of rehabilitation requires careful thought on the part of authors. Vampires are almost universally depicted as alluring, wealthy and Caucasian. Despite their lethality, they tend to be slender-framed and pale as if to suggest fragility and are more likely to be shown actively finding alternate sources for feeding.  Often, there is broad and complex network that facilitates this. Werewolves in contrast are often depicted as swarthier, brutish, menacing in stature and lower class and generally more ethnically diverse. They are more likely to be perceived as wild and feral. Wolves aren’t usually shown to have the same complex structures or resources. In media where the two groups coexist, they are often at loggerheads. This coding can be problematic because it can subconsciously suggest to the reader that some creatures are more worthy of redemption than others.

Going back to the war on drugs, the crack epidemic which affected poor urban usually black and Hispanic communities was met with a brutal militarized response. The response to the opioid epidemic, while still brutal, was met with far more compassion and stronger emphasis on rehabilitation. The ongoing opioid epidemic is also largely centered on rural and suburban white people.

While it should be noted that the broader understanding of addiction shifted in the years between the two crises, from personal to societal and retributive to restorative, it is nevertheless important for writers to interrogate these ideas. Carefully considering how you might deploy them will be key to pushing your story and the genre forward. Mental health, addiction and society interact in kaleidoscopic ways, reflecting a range of complex inner workings. Our understanding of these topics will shift as new discoveries are made. Though it is not necessary to include any of these ideas in your work, it will be left to us to write the worlds we want to create.