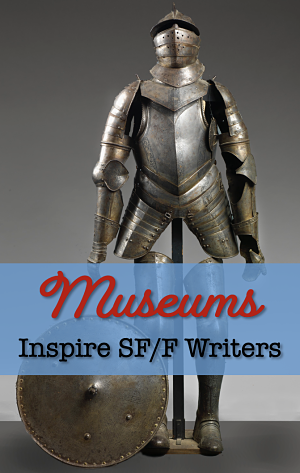 This article on museums inspiring SF/F writers is part of the Science in Sci-fi, Fact in Fantasy blog series. Each week, we tackle one of the cultural, historical, or world-building aspects of fantasy with input from an expert. Please join the mailing list to be notified every time new content is posted.

Graeme K. Talboys was a teacher in schools and museums before he became a full-time writer. As well as works on museum education he has written a number of general non-fiction books. He has also written several fantasy novels. His latest series, Shadow in the Storm, is being published by HarperVoyager. He lives in Scotland with his wife and two cats (and 5 million Scots). You should follow him on Facebook or Twitter.

There are considerably more people alive on the planet today who live a hunter/gatherer existence, using stone tools, than have been into space. Development and existence is never uniform. Even those of us who use computers everyday, regularly use or have contact with items that are decades or centuries old. And although it is not so predominant now items like furniture were passed down the generations. The obsession with the new is a new obsession.

No world is ever likely to be homogenous or monocultural unless there are very specific reasons which, in themselves would make an excellent story. It is far more likely that any sufficiently large and growing population of people or peoples will produce disparate cultures, languages, levels of ‘progress’ (a minefield of word) and so on. These will be driven by both internal and external factors. Cultures developing in warm climates with abundant natural food supplies will take different paths to those that evolve in moderate or colder climates, for example. And although it failed to happen here, different races are also possible. There were others in the past and given other circumstances they might have survived to the present day.

This leaves us with a world littered with old stuff. It’s everywhere. Some we still use, especially buildings. Other items are lost or discarded. Until recently, most would degrade naturally, but sufficient would survive for specialists to find, retrieve, and conserve so we could learn about the past. For every piece of ‘treasure’ there are thousands of pot sherds, lost pennies and broken buckles, and scraping from the plate; each with a story to tell. And their stories are told in museums, by people who have storytelling down to a fine art.

The list of museums you are likely to have encountered in sf&f will probably be short and mostly peripheral. In DC Comics’ Strange Adventures, there is, of course, ‘The Space Museum’, a precursor to Warehouse 13. Dr Jones and Lara Croft have some contact with museums. H G Wells famously included a museum in his The Time Machine in which the Time Traveller pondered on all that had been lost. Robin Jarvis set a whole YA trilogy in a museum to great effect. Futurama features museums and ancient artefacts as the whole show is acutely aware of the connection between past and future.

Maybe, then, museums just aren’t relevant to sf&f. I would argue the contrary although, of course, you don’t need to put an actual museum in your work for museums to feature in and inform your writing. This can be achieved in two ways. The first is by using museums for research. The second is by using their raison d’etre and their function to colour the world you are creating and make it more realistic.

A museum is a landscape, site, building, or collection of artefacts of archaeological, historical, and cultural interest preserved and displayed for the purposes of education, study and enjoyment. And even if you are strangers to them, the importance with which society imbues museums and the artefacts they contain demonstrates that there is a deep, fundamental reason for their presence – one which has existed since museums came into being several millennia ago.

For the writer, museums can fulfill several roles.

Can’t I just read a book? I hear you ask. Well, you could. However, all the best books on any subject are written by people who went to primary sources for their information – things like objects in museum collections. And that doesn’t just mean old bits of pottery, lumps of rock, or great-grandpas woodworking tools. You may well find photographs, painting, drawings; people’s diaries; a whole host of other documentary evidence, along with all the items not quite up to display standard which are either in stored or collected into handling collections. No matter how good another author’s research and how interesting and well illustrated their book, it is never going to convey to you the kind of information you need to enrich your writing.

Take a sword for example. Do you really know how to wear different types of sword? How heavy they are? How easy it is to draw a blade from which ever position it is mounted? What the hilt feels like in your hand? How to hold and fight with them? Whilst carrying a shield. And wearing armour of varying types. You can imagine these things, certainly, but the emotional impact of handling a weapon is something that is different for each person and only you can translate your psychological state into that of your character or characters. Admittedly, medieval weaponry, castles, and battlefields are a bit thin on the ground in North America if they are the baseline for your fantasy, but even if your local museums cannot help you, they will undoubtedly know someone who can. Re-enactment societies and the peripheral trades and skills required will exist and will be only too happy to help, especially if they get a big thank you in your acknowledgements.

It doesn’t need to be anything as spectacular as weaponry or fighting. Everyday living in various historical periods can act as a useful analogue for your world building. Simple things like bedding or food are easy to sample (it wasn’t all straw pallets and stew). Little details, especially those that have appealed to your senses – how something feels, its texture, weight and so on; what things taste like; what they smell of; the kind of noises they make (what do riding boots sound like on wooden floors?); their colours and shape and the simple impact they have on you the first time you see them and how that marries up with your other sensations. You cannot get that from books in a way relevant to you and your characters.

Even if you have no specific goals or interests at a particular time or, more importantly, if you are stuck, blocked, can’t work something out, then remember that a museum is a place of the muses. Who knows what you might see or experience if you wander about an exhibition? It’s a kind of inspired meditation. You walk about absorbing all sorts of new sights, the objects and pictures on display, the other people visiting the museum. Somewhere in there may be the solution to your problem or the spark for a new story. And even if it isn’t, you have hauled yourself out of your chair, had a bit of exercise, and done something different.

Curators and keepers, archaeologists, archivists, conservators, designers, and all the others who work in museums have another expertise that is often overlooked. They are, in one sense, in the same business as sf&f writers. They are world builders. And they are very good at it. 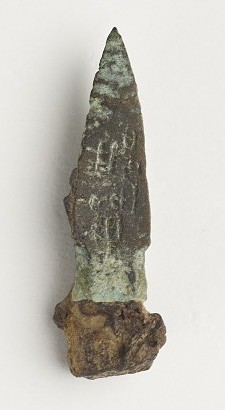 Consider the displays in a museum. These aren’t just random objects thrown in where they will fit. Rather, each case or display has a story to tell and each item on display has been chosen to illustrate that story. Even items as apparently incomprehensible and random as flint chippings can be assembled to show how a flint knapper works a piece of raw flint to create an arrow head or a scraper. Accompanied by video of a modern day knapper at work and suddenly the little bits of stone have not just a story of their own, but a person behind that story who has honed their skills and contributed to their community. It might not be a complete picture of that distant world, but there is enough there to feed the imagination. A lesson for all writers.

The only difference is that museum staff must abide by the hard facts available to them. And even when they speculate, it must be based on a deep knowledge and understanding of subject and context. Whilst the writer of fiction is freer of that, they do have an obligation to their reader to make their worlds plausible and consistent.

Museums might not loom large on your horizon but they are cultural assets worth protecting (as are writers). They deserve our support and who knows what connections might grow if you become a visitor and make use of what they have to offer.