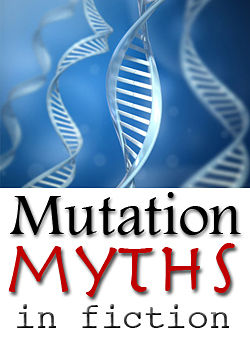 I know what you’re thinking: any guy can claim to be an expert on something when it’s his own blog. Yet in this case, it’s true: I’ve worked as a genetics researcher for the last decade, and co-authored more than 50 publications in Nature, Science, JAMA, the New England Journal of Medicine, and other journals. Currently, I manage the human genetics group for one of three NIH-funded large scale DNA sequencing centers in the United States. MassGenomics, my work-related blog, is where I do most of my writing about DNA sequencing and its impact on our understanding of genetics.

In my last post for this series, I wrote about some common misconceptions about genetics that often show up in fiction and mass media. This time, I’d like to tackle a related concept, the mutation of DNA. Mutation is the process by which a base in DNA is accidentally, yet irrevocably altered. As usual, I’m going to tackle some of the “myths” about mutation that I’ve encountered in fiction — especially science fiction — and then offer some guidance for authors to help them get it right.

Thanks to advances in genome sequencing technologies, we have a good estimate for the human mutation rate. It’s roughly one mutation per 100 million base pairs per generation. Granted, the human genome is large (3.2 billion base pairs), so each of us does have about 32 mutations that neither of our parents gave us. Compare that to the ~3 million inherited genetic variants, and you’ll understand just how rare true mutations are. An important exception to this: somatic mutations, which happen during or after an embryo develops, and thus are found only in a subset of cells. Our group uses next-generation sequencing to examine cancer genomes. Cancer develops from a single cell that’s acquired somatic mutations. The highest mutation rate I know of? The genomes of lung cancer specimens from lifelong smokers.

Quite the opposite. Most mutations are actually neutral, because they occur out in the 95% of the genome that doesn’t really do anything. When mutations do hit a protein-coding gene or regulatory region, it’s usually bad news. The human genome has been under natural selection for thousands of years. It’s like tinkering with a complicated machine: when you make random changes, you’re more likely to break something than improve it. Most of the well-known inherited disorders, like cystic fibrosis or sickle-cell disease, are caused by mutations that damage or disable the proteins. Well, sickle-cell disease is an unusual example: if you have two copies of the mutation (one in each copy of the gene), you get sickle-cell disease. However, if you have just one copy, it protects against malaria. You can understand why that allele has persisted in populations of African origin.

I really like the movie Resident Evil, but there’s a scene that bothers me. A creature in it “mutates” and changes form entirely in the course of a few minutes. It’s a frighteningly cool speculative element, but not terribly realistic. Usually a mutation affects a single cell. If multiple cells are hit, as might be the case with exposure to radiation, the mutations would be random in those cells. The odds that the same one would occur in two different cells are infinitesimal. Even a dramatic change, like one that causes some tumor cells to resist chemotherapy, requires weeks or months to have a system-wide effect. In the absence of a pervasive delivery mechanism (like a virus infecting lots of cells at once with a custom gene), there’s no way for a significant, rapid change to a complex organism like a human.

Now that you’ve been disabused of some of the worst myths, you’re already well-equipped to write about mutations rather well. It might also be useful to cover some of the basics.

The Causes of Mutation

Mutations are typically caused by DNA damage after exposure to mutagenic elements (carcinogens, ultraviolet light, ionizing radiation, etc). Our cells have complex machinery for repairing DNA damage, and, failing that, to initiate a self-destruct procedure. Sometimes it doesn’t work as intended, particularly if the machinery has itself been compromised. That’s why carriers of certain mutations in the BRCA1 and BRCA2 genes (involved in DNA repair) predispose women to breast and ovarian cancer. Mutations can also occur due to biological errors — mistakes made by the enzymes that copy DNA when cells divide. When this happens during meiosis, a mutation might be passed on to the child that wasn’t present in the parents.

The millions of genetic variants that (in combination) distinguish us from one another arose from mutations in our ancestors. Mutations that are damaging tend to be weeded out over time by natural selection — the people with them were less apt to survive and have children. This form of selection, called purifying selection, is evident in many of the protein-coding regions of the genome. Its signature is a lack of genetic variation among healthy members of the population. In contrast, regions where genetic variants are common are unlikely to be under strong selection, because otherwise lots of people would be messed up (to use a scientific term).

There is another kind of natural selection, positive selection, under which variants that confer survival or fitness advantages rapidly become common in certain populations. In the poorly-received movie Waterworld, for example, the character played by Kevin Costner had developed gills which allowed him to spend long periods underwater. Obviously there’s a survival advantage, though it might be compensated for by all of the normal people trying to kill him.

The classic real-world example of positive selection in humans is a mutation that altered the LCT gene — allowing us to be lactose-tolerant — that arose in Africa during a period when cattle were being domesticated. Being able to drink cow’s milk was a major advantage, and the mutations that provided this capability were rapidly selected for. Granted, I mean “rapidly” in terms of evolution, which is measured in generations, not years.

Another well-known signature of recent positive selection in the human genome affects genes related to innate immunity. This also is unsurprising, since infectious diseases were (and in many places of the world, remain) a common cause of mortality and morbidity. I’d love to tell you that more exciting science fiction traits like super strength or super speed were under obvious positive selection as well. Unfortunately, we haven’t found convincing evidence of positive selection acting on physical traits.

At least, not yet.